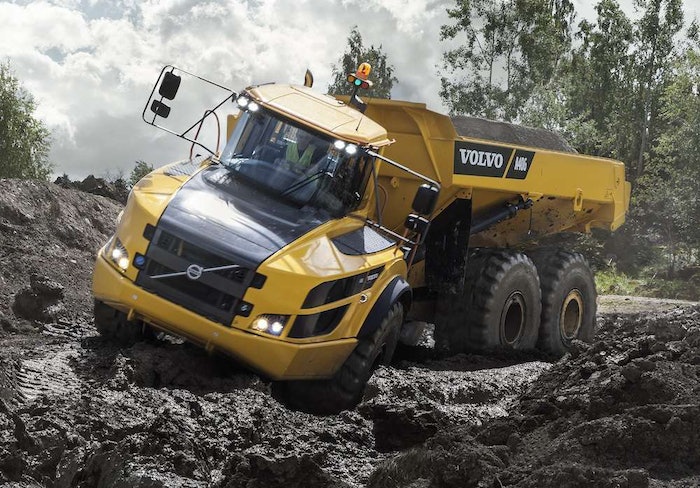 The Tier 4 Final machine is the largest of Volvo’s new G-Series, which includes six models, ranging from the 26.5-ton A25G up to the 43-ton A40G.

“Since productivity is so key on artics, we don’t have any daily or weekly service items on the machine,” says Henrik Larsson, product manager with Volvo. “The first time it needs greasing is at 250 hours.”  Volvo is retaining its distinctive front service access, in which the front grille tilts down to disclose steps. The engine hood tilts up 90 degrees and Volvo has realigned the hydraulic tank, emissions aftertreatment system, muffler, fuel tank and refueling pipe to what it calls “more intuitive locations.”

The fuel fills for both diesel and DEF are under the front hood. Facing the machine, the diesel fill is on the right side of the engine and the blue-capped DEF fill is on the left side. “Customers told us they needed the fills to be close to each other,” Larrson says. “Every time you fill the diesel, you fill the DEF tank,” which is sized proportionally to the diesel tank to administer around 3 percent DEF per gallon of diesel.

An engine shutdown timer is standard on the A35- and A40-size models. This feature lets the engine run for three minutes before shutting down to give the turbocharger time to cool down. Volvo is also offering its fuel efficiency guarantee on the A40G articulated haulers: If the machine’s fuel efficiency does not meet model-rated fuel efficiency levels—which on the A40G is 9 gallons per hour or less—the company will reimburse a portion of the additional fuel. The guarantee is only available to users who activate CareTrack, Volvo’s standard telematics system, which it now offers free to buyers of new machines for six years.

Also retained on the G-Series is Volvo’s automatic traction control, which switches between 6×6 and 6×4 to ensure both maximum traction and lower fuel consumption. The company offers full hydraulic suspension options on its two largest models, designated by an “FS” designation in the model name.

An onboard weighing system, which has color indicator lights visible inside and outside the cab, is standard on the A35- and A40-size machines. “When the yellow light comes on, you’re 75 to 95 percent full, and when you’re at 95 to 110 percent full, the green light goes on.” Larsson says. A red light comes on when the weight is above 115 percent of maximum load. “With the trucks that we now have out in the field, we’ve seen an average payload of 46 tons, which is inside the 110 percent limit,” Larrson says. “We know that users overload them, but now it’s really to easy to see when that’s happening.” CareTrack provides payload management data gleaned from the system.

The oil-cooled wet multiple-disc brakes that were on the F-Series A35 and A40 models have now been extended to the full G-Series range.

One tweak on the G-Series: to enhance safety, particularly in quarries where more stringent MSHA regulations apply, machine hand holds are now orange instead of gray. “That color will probably be standard going forward,” Larsson says.

View the video above to learn more about the A40G.

You can feel the new Cat S62's military-grade specs. At 9.17 ounces, the phone has heft, but it's also sleek. This is not a clunky Otterbox designed to protect a fragile core.