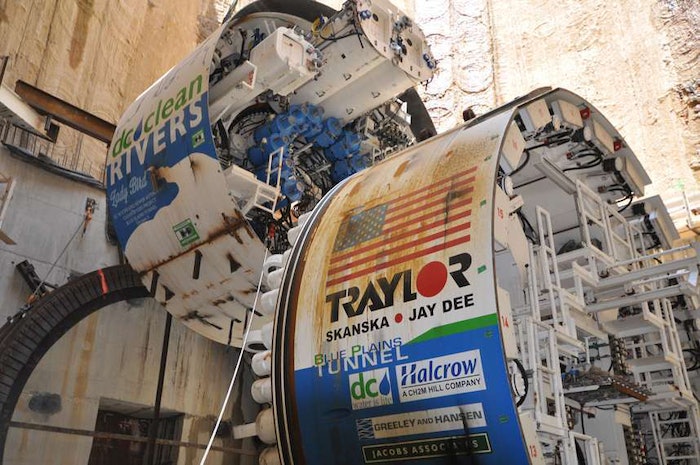 Lady Bird is installed below Washington D.C. before getting to work last year.

Each year in Washington, D.C., about 2 billion gallons of raw sewage is dumped into the Potomac River, the Anacostia River and Rock Creek, according to a report from the Washington Post.

But Lady Bird, a massive tunnel-boring machine, is working to change that.

The machine is digging a $2.6 billion 13-mile tunnel system that will reduce this sewage overflow to DC’s bodies of water by 96 percent.

While Lady Bird, named for former First Lady Lady Bird Johnson, is only half the diameter of Big Bertha, the world’s largest tunnel-boring machine working deep below the streets of Seattle, she’s still a giant feat of engineering.

Manufactured in Germany specifically for the DC Water Authority and this project, the $30 million machine boasts a 26-foot diameter, is 443 feet long and weighs an amazing 1,323 tons. At full speed, the machine can tunnel 100 feet per day.

Each foot of progress requires three dump trucks to haul away the dirt tunneled and by the time the project is completed, Lady Bird will have removed approximately 13 million cubic feet of soil—or 205,820 truck loads.

Like Big Bertha, Lady Bird has its own Twitter account so residents of DC can track her progress. DC Water has also added an animated map to track Lady Bird’s process on its website.

The machine works by blasting the soil ahead of it with a mix of chemicals, then chewing away at the softened earth before sending the muck along via conveyor belt to be hauled away. As it moves, the machine installs the slabs of concrete that form the tunnel walls. 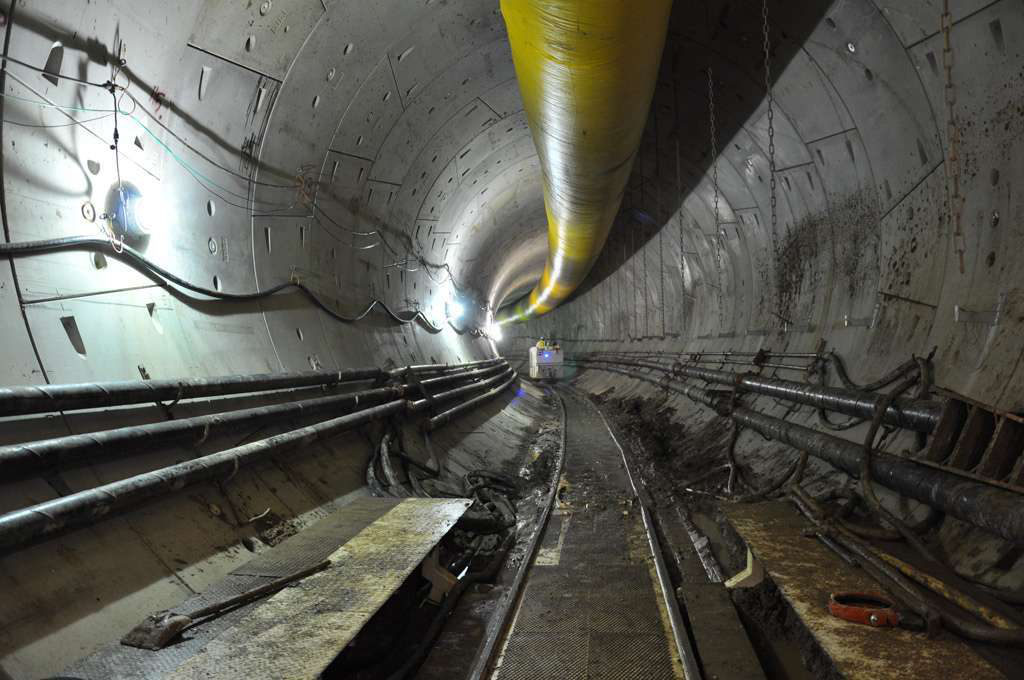 A completed section of the tunnel Lady Bird is digging below DC. Credit: DC Water Flickr

The new tunnel is necessary, according to the Post, because D.C. currently uses a combined sewage system. That means the city’s sewers funnel both wastewater and rainwater toward its sewage-treatment plant. On days with heavy rain, the path gets overwhelmed and overflow is caused, sending sewage into the Potomac, Anacostia and Rock Creek.

The new tunnel system will take that overflow and treat it in a new treatment plant. Plus, the tunnel will have tributaries and diversion chambers where sewage can be stored to make sure the new system can’t be overwhelmed. You can watch a video from the tunnel site below.