A number of design enhancements and improvements went into the two new concrete boom pumps shown by Putzmeister at the World of Concrete this week.

Putzmeister also reorganized the deck allowing for about 30 percent more space. The rack and pinion bearing in the pedestal has been replaced by a rotation bearing for easier access to the turret pipe. A simplified pipe design with two different types of elbows, as opposed to three, provides easier concrete flow, minimizing boom bounce and improving safety.

A new RS 909 hopper has a robust, lightweight design with an RFID safety switch to prevent it from operating with the grate open.

The bigger model also went on a diet, slimming down 2,100 pounds for all the above mentioned benefits. A more robust pedestal supports the five section boom with bolted connections to allow for greater flexibility. Putzmeister likewise simplified the elbow configurations, going from seven types of elbows to three. The 38Z also benefits from the rotation bearing replacing the rack and pinion design. 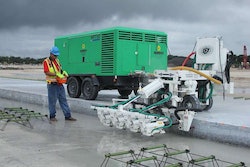 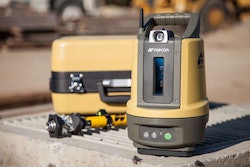 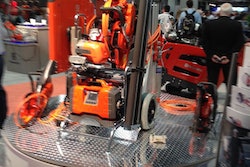 4-in-1 trolley from Husqvarna offers tools, power unit and remote control in one compact wheeled unit