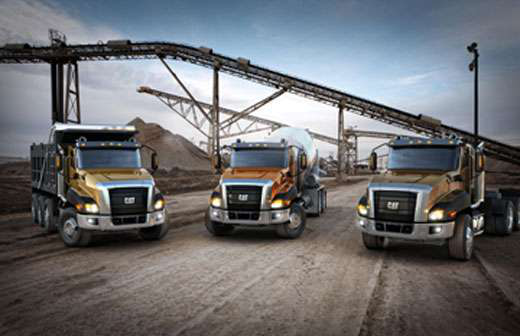 “We feel we have a very beneficial partnership with Navistar, and we’re moving forward on getting an SCR engine in late first quarter 2013,” says George Taylor, on-highway truck group director, Caterpillar, during a press event held today prior to MINExpo.

There are now more than 650 Cat CT660 trucks now out in the market, primarily in heavy haul and dump truck applications. Taylor says that about 60 percent of the trucks are currently spec’d with Cat transmission, while the remaining have Eaton transmissions.

Cat will introduce its CT680 set-forward truck next year. “If you like the look of the 660, the 680 looks even tougher,” he says. Cat is also looking at expanding outside the states and Canada. “We’re considering going into Mexico, and other areas where we can run a conventional truck,” Taylor says. And although cabover designs dominate the rest of the world, Cat doesn’t have a cabover planned in the “immediate near term.”

The CT660 Class 8 truck has a set-back axle with two hood lengths and can be customized for mining. Cat says it interviewed 650 owners, fleet managers and drivers plus more than 30 dealers in designing the truck, which started shipping last year.