Those iPhone users asking Apple for a larger screen finally got their wish today.

The iPhone 5, unveiled by Apple during an event in San Francisco Wednesday, features a new 4-inch display, a thinner design and 4G LTE wireless data connectivity. Pre-orders for the new device will begin Friday, Sept. 14 starting at $199 for 16 gigabytes of storage. It will be available at AT&T, Sprint and Verizon Wireless.

The device is the same width as the iPhone 4S, but taller to accomodate the larger, 1136 x 640 resolution Retina Display. Apple’s vice president of worldwide marketing Phil Schiller said the display is more accurate to the touch than the display on the iPhone 4S and features 44 percent more color saturation.

Those whose phones are overflowing with apps will be happy to learn that the extra screen real estate adds a fifth row of apps to the home screen of the iPhone 5. Schiller said the yet-to-be-released iOS 6 (the operating system that powers the company’s iPhone, iPad and iPod Touch devices) and each of Apple’s apps (Pages, Keynote, Numbers, iPhoto etc.) have been updated to fill the display. Third-party developers are currently working on updating their apps for the new screen. For the time being, apps that haven’t been updated will be letterboxed with black bars on either side.

The new device also boasts a redesign. At 7.6 millimeters, the iPhone 5 is 18 percent thinner than the iPhone 4S and weighing in at only 112 grams, it is 20 percent lighter. Apple has abandoned the nearly all-glass design of the iPhone 4 and 4S for a new aluminum backing on the iPhone 5.

With that thinner design, Apple also abandoned its 30-pin dock connector used for charging and connecting the iPhone to a computer. It instead developed a new “Lightning” connector that is 80 percent smaller, reversible and more durable. Those who have amassed several chargers and other connector accessories over the years needn’t worry. Apple will release an adapter that will allow you to continue using them.

But the improvements are much more than skin-deep. A new A6 system on a chip powers the iPhone 5 with significant performance improvements over the A5 chip in the iPhone 4S. Even though it’s 22 percent smaller than the A5, both the A6’s CPU and GPU are twice as fast.

The camera on the iPhone 5 is improved as well. The 8 megapixel shooter offers the improvement of a new dynamic low light mode and impressive f/2.4 aperture. (The lens allows more light into the camera which results in pictures that are less grainy.) In addition, photo capture is 40 percent faster than the already-nimble 4S and the iPhone 5 even has a mode capable of capturing 28MP panoramas. This should definitely come in handy for quickly capturing high quality pictures, maybe even job site panoramas, while in the field.

The iPhone 5 camera is capable of 1080p HD video capture and is bolstered by improved video stabilization and face detection, just as the new iPad was. Apple improved the front-facing, iSight camera as well. It now captures 720p video and features face detection.

Apple improved the wireless networking capabilities of the iPhone as well. In addition to 2.4 and 5ghz 802.11n Wi-Fi, the iPhone 5 is the first iPhone to support 4G LTE cellular data. 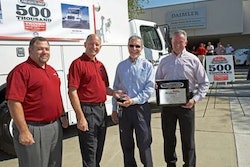 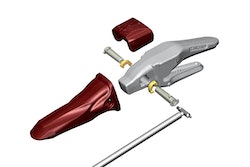 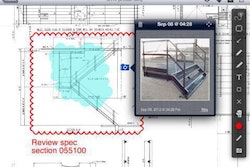