Alaska’s Drake Construction is our 2020 Contractor of the Year

Toby Drake, owner of Drake Construction, Kotzebue, Alaska, was named Equipment World’s 2020 Contractor of the Year in a ceremony and awards banquet at the Venetian Hotel in Las Vegas.

Kotzebue, Drake’s home base, is 33 miles above the Arctic Circle.

“In six-month’s time we have to finish the same amount of work that most other contractors get 12 months to do,” says Drake.

Check out our post-awards interview with Drake in the video above.

In addition to the brutal cold, sometimes as low as 50 degrees below zero, Drake and his crews have to contend with a month in winter where the sun never rises and a month in summer where it never sets. There are no roads into or out of the areas he builds in, so Drake moves material and machines on shallow-draft barges and ice roads.

More than once, in emergencies, he’s had whole machines flown up in a C-130 cargo plane. Considering his gravel pit, four barges and three tugboats, Drake likes to joke: “You think OSHA is tough? OSHA is easy compared to MSHA and the Coast Guard.”

When the weather warms in April, Drake’s crew swells from just a handful to three dozen or more, including three mechanics and two mechanic’s helpers. Working 600 miles as the crow flies from Anchorage, Drake is on its own when a machine breaks down. There’s nobody to call for service. Getting Tier 4 equipment and DEF to work in the temperatures they operate in requires maintenance skill far in excess of what other contractors need.

Logistics are also a huge challenge. Gravel coming out of his quarries this year will be barged to the sites he’ll be working on next year. Lighter materials and parts are often transported by snow mobiles. Has built two apartment buildings in Kotzebue and one at the gravel pit to house his in-season crews.

In addition to water and sewer work on top of permafrost, Drake builds gravel roads, airstrips, commercial buildings, pilings, small port facilities, and foundations. They pour concrete, move houses and perform tilt-up construction and infrastructure for Kotzebue’s water and fuel storage plant. Because of his innovative ability to build shallow water barges to deliver aggregates, Drake has become the primary supplier of aggregates to most of Western Alaska.

The company keeps everything it needs on hand staged at jobsites or in the yard in Kotzebue. In addition to the four barges and two tug boats, they own a fleet of articulated trucks, two cement mixers, all the necessary crushing/screening plant equipment for the pit, two cranes, a handful of haul trucks, about five dozers, several wheel loaders and many other pieces of assorted equipment.

Born in southern California, Toby moved to Oregon when he was young. His father, Wayne Drake worked in logging, built houses and started a construction company. Toby distinctly remembers his dad’s crews coming to the house in the predawn hours. Over coffee they discussed the days jobs, what needed to be done and how they were going to do it. Toby says at an early age he could see that his father commanded respect, that he was the guy who could get things moving, to solve the problems, to bring in the work.

One of the most important lessons Toby learned from his dad was how to calmly and deliberately solve problems. Construction in Alaska is fraught with challenges and unexpected problems, but Toby says his dad never got rattled, he just quietly figured it out, usually finding the simplest solution to be the best solution and moving forward with that. His dad also never said no to a job even if he didn’t know how to do it. If somebody wanted it done, Wayne Drake figured out a way.

Bad attitudes in the Arctic can do more damage than hurt feelings and pink slips. One quitter in an emergency repair could cause a whole native village to go without water or sewer for an entire winter. And the airstrip and port infrastructure Drake builds is essential to the survival of a dozen or so Native American villages that radiate out miles into the tundra from Kotzebue.

Neil Strandberg, Alaska DOT, says this about the company: “They’re cutting edge for this area. They saw the potential and invested in GPS grade control early on. They’re willing to get it right and that goes a long way toward creating a good feeling when you’re working with them. The environmental regulations we work with around here can be extensive, but Drake follows everything to the letter and never leaves anything behind other than a perfect site.”

Another customer, Dennis Jennings, with the city of Kotezube says: “He’s probably the best contractor in the region. He knows the people, he knows our customs, the nuances of the community and working with the multi-jurisdictional aspects and the native populations. 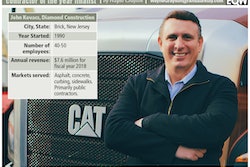 This engineer ‘wanted to be the guy.’ So he built a successful construction firm 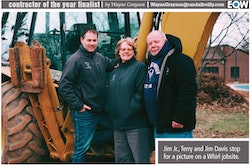 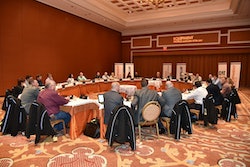