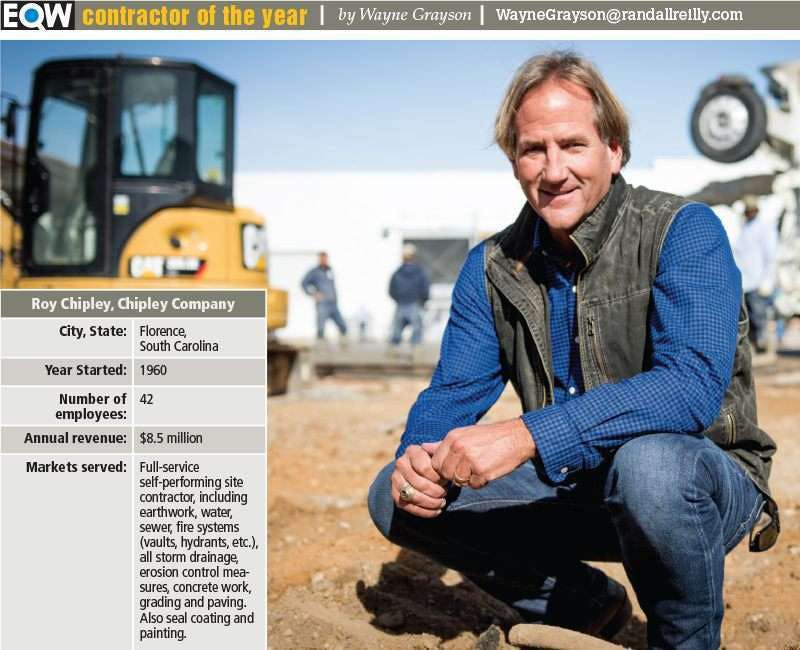 After walking away from a career launching space shuttles and satellites into space, Florence, South Carolina’s Roy Chipley took the reins of the family construction business and has built a success story of his own. Photo: Wayne Grayson

Things were getting better for Roy Chipley.

After a successful but demanding career with Lockheed Martin began hurting his marriage, Chipley realized that changes must be made. His wife, Sian, led him back to church where he had given his life over to Jesus Christ. The couple renewed their wedding vows and were getting ready to build a house, “starting afresh with restored purpose,” Chipley says.

But in the middle of his life’s reconstruction, Chipley had a troubling realization. Just as he had grown distant from his wife, he had also grown apart from his and Sian’s hometown of Florence, South Carolina. Cape Canaveral was some 450 miles away, and the distance had also driven a wedge between Chipley and his family.

That turmoil struck 22 years ago and might seem like ancient history. But it eventually led him over the next two decades to transform what his father, Roy Jr., started in 1960 as a paving company into a successful and highly respected full-service site contracting business now named Chipley Company.

That wasn’t always the plan. Chipley left his small hometown at 17 with no intentions to return. By 1995, his father was in his late 60s, and with no one to pass the business along to, he paired the business down drastically.

The idea of what his father had worked so hard to create vanishing weighed heavily on Chipley. So he went to Sian with a crazy idea: He wanted to change gears, and walk away from a job that had allowed him to work on the Space Shuttle program and then launch military satellites for the Defense Department. He wanted to head home to Florence and save the family business.

The move would mean an 85-percent pay cut and completely uprooting the lives of his wife and two children and leaving those in Florida they considered close friends and family.

“I just told Sian we were the only ones that were going to be able to take my dad’s company on,” Chipley recalls. “We would be writing new chapters in a brand new blank book of our life.”

Things were getting better, but they were not yet put back together. 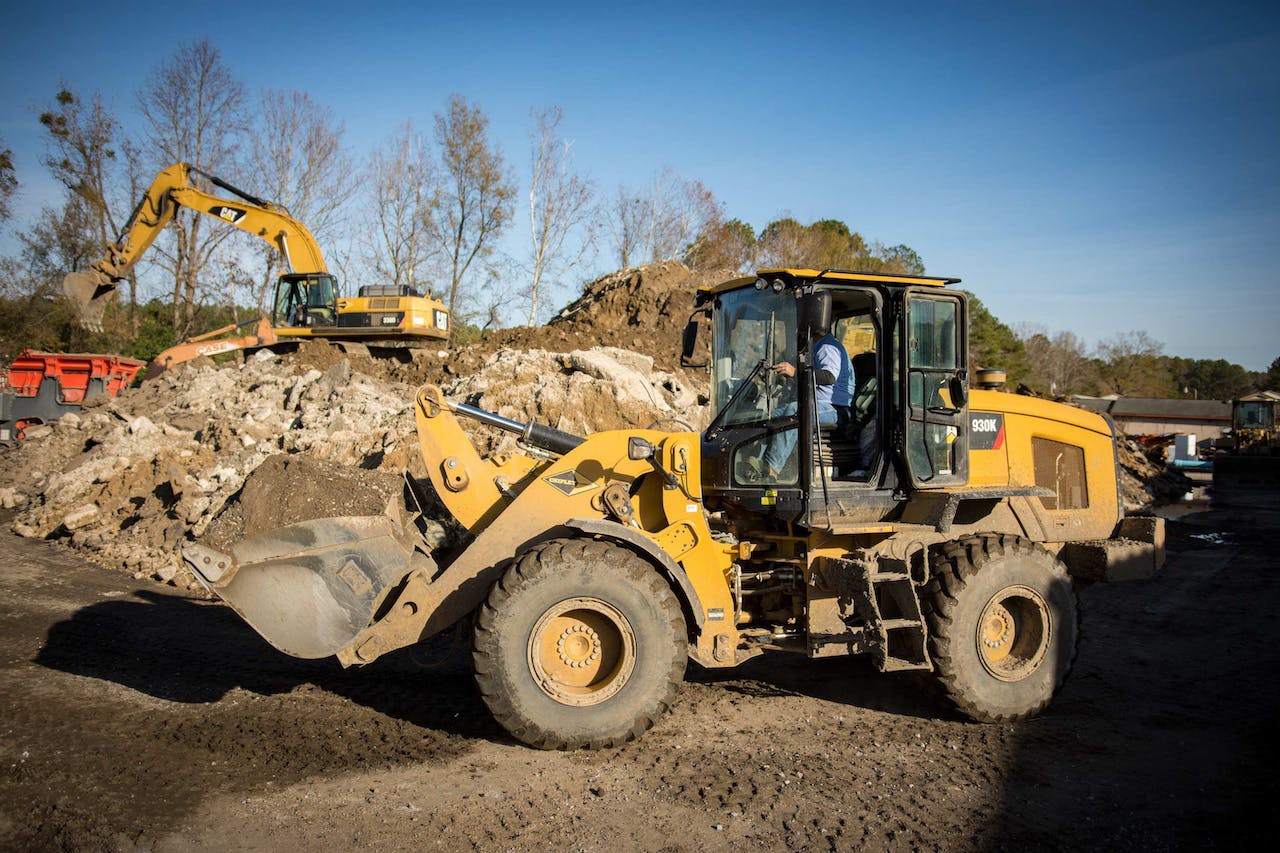 Once or twice a year depending upon the need, Chipley Company runs a concrete recycling operation. Photo: Wayne Grayson

It wasn’t as easy as just going home, however. Chipley first had to convince his father of the plan. During a surprise visit in March 1995, Chipley’s father expressed his doubts after he learned of his son’s idea.

“He said there was no business here. I disagreed,” Chipley recalls. He then drove all over Florence stirring up opportunities that his father hadn’t been able to chase down.

“I told him, ‘You’re the brains; I’m the blood, sweat and tears,’” Chipley recalls, noting that he hit the ground running once his father agreed to a transition plan. “I began doing all the estimating; I did drawings. I brought in computer technology.”

It was only six months after he moved back home that Chipley received his biggest test. Though his father never had health issues before, he fell ill and couldn’t work for about two years. By then, though, Chipley was ready to take the reins.

“Once I turned my life to the Lord, I can look back into my past and see Him,” Chipley says, explaining how his time away from home prepared him not only to return but to carry the family business on his shoulders. “I left to go make my way, and I did make my way, and it made me stronger.”

Making it his own

Chipley’s father died in 2010. But in the 15 years he spent learning at his side, Chipley soaked up every ounce of knowledge and experience he could, while sprinkling in his own instincts and understanding along the way.

Now, Chipley’s company is an $8.5 million per year business. “My dad was part of that greatest generation of World War II,” Roy says. “And whatever they did, they did 100 percent. And he was brilliant. That was who I had as my business partner.”

The company, which now employs 42 people, has transformed into a full-service site contractor serving primarily commercial clients and doing an occasional residential job. “Our overhead is not so great that we can’t go do people’s driveways,” Roy says. “Back in the old days that might have been a strong part of the bread and butter. We’ve not lost sight of that and never will.” 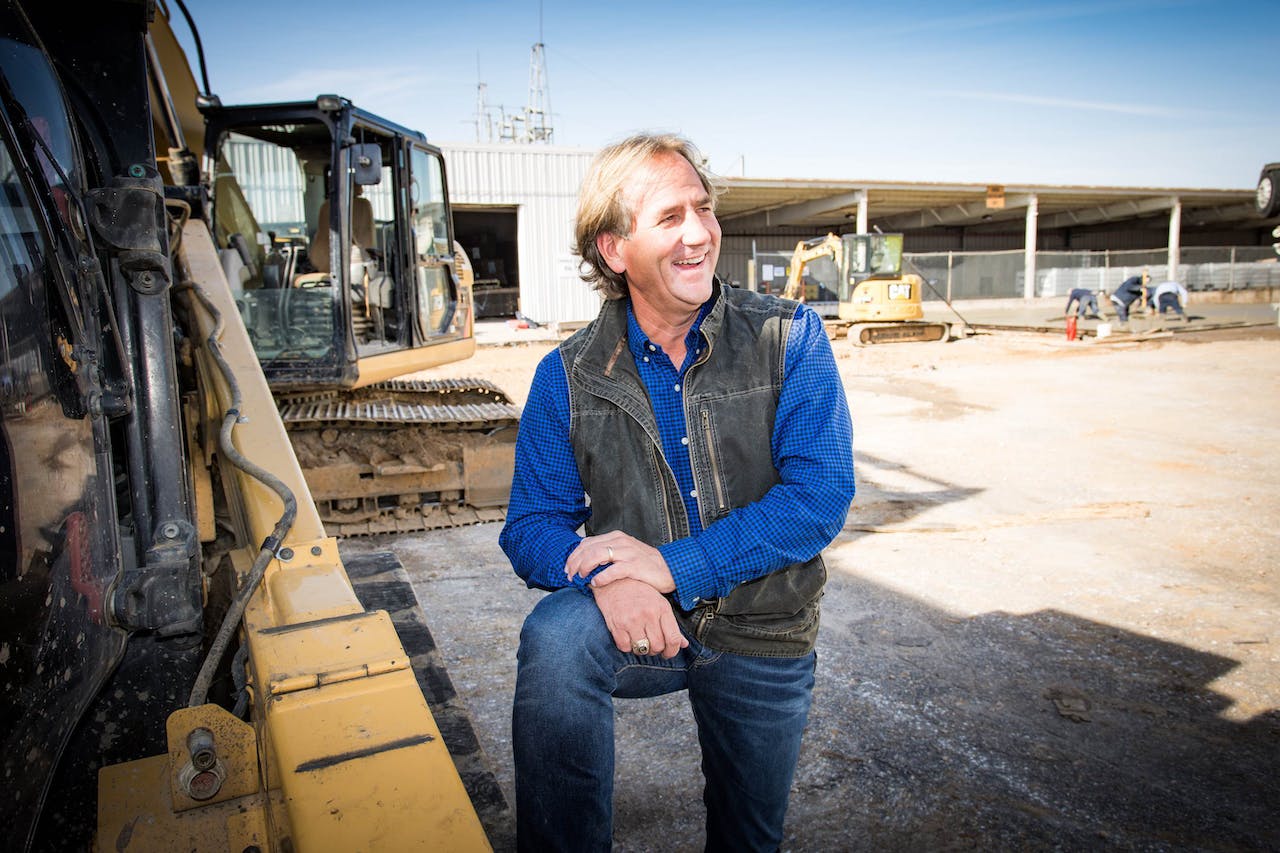 Chipley responds to the friendly jeers of a few employees during a concrete pour at GE Healthcare in Florence, South Carolina. Photo: Wayne Grayson

“We got tired of holding our subs’ hands,” he explains. “Around 2002 or 2003, I started buying concrete forms myself, and we started doing the hand work. We hired more people that had concrete experience, and we began to self-perform concrete work. Water and sewer we would sub to other people.

“This business operates under my GC license and my license covers everything, and we began to self-perform our own utilities in 2009.”

Chipley manages his operations from a MacBook. He doesn’t even have his own office within the company’s building, saying he prefers to not be tied down to a single location throughout the day. “My laptop goes with me everywhere. I can be reached anywhere, and I’m always out on the jobsites,” he says. 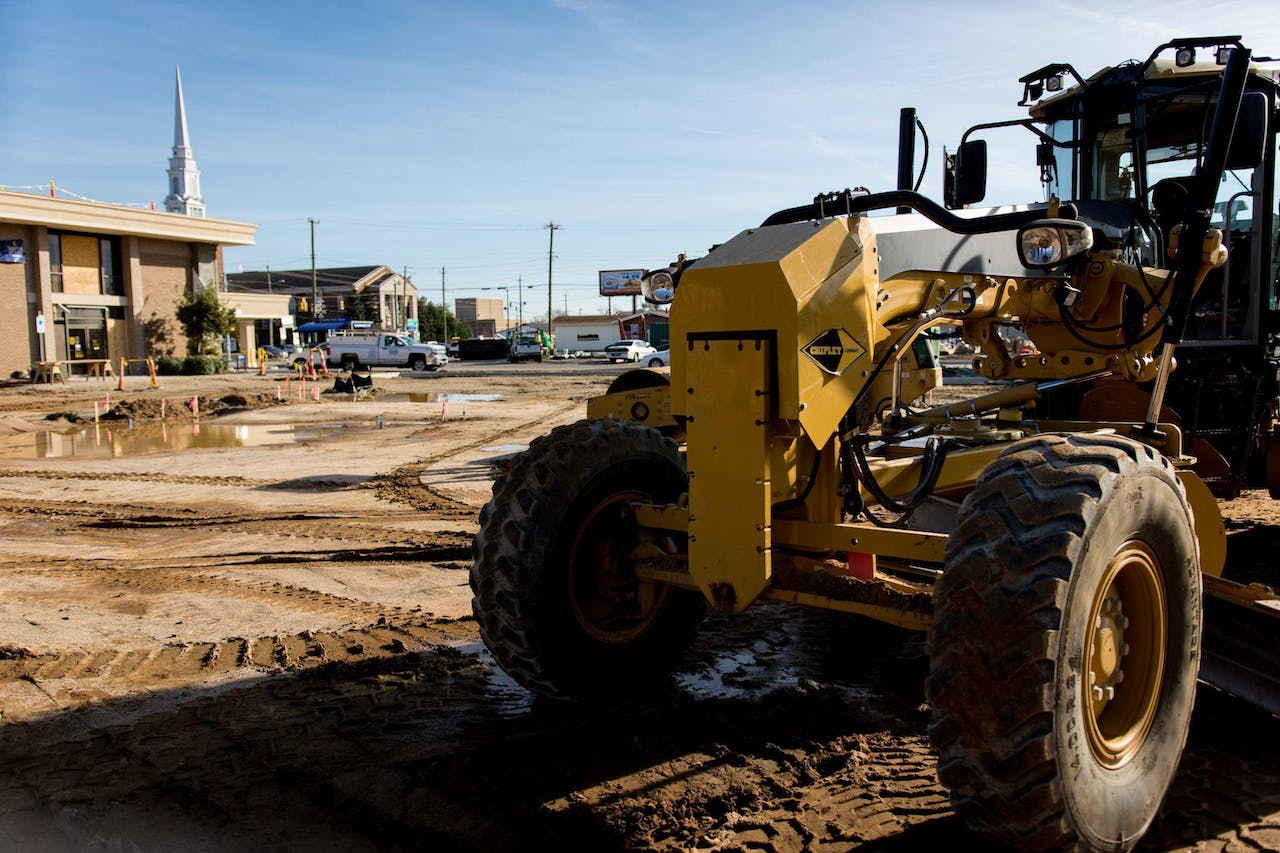 And though he’s not keen on keeping an office, one place Chipley does love to be is in the Chipley Company shop. Among other machines that he’s returned to working order, Chipley tells the story of a 30-year-old motor grader he brought back to life. He took on the 1966 Galion 503A not long after returning home. “It took new pins, new bushings, new clutches, but I got it back to being fully operational and tight,” he says with a smile.

Maybe it’s the Clemson engineering background, but things in Chipley’s life rarely seem whole until they have been taken apart, the pieces spread across a grease-stained concrete floor, before carefully being put back together.

Reconstruction has saved Roy Chipley’s soul, his marriage, his equipment, his family and his business. But it is not a simple approach toward life, he says. There is much pain in the disassembly.

“I’m not a ‘woe is me’ kind of guy. I know Who I serve and I know He didn’t have me destined for failure.” 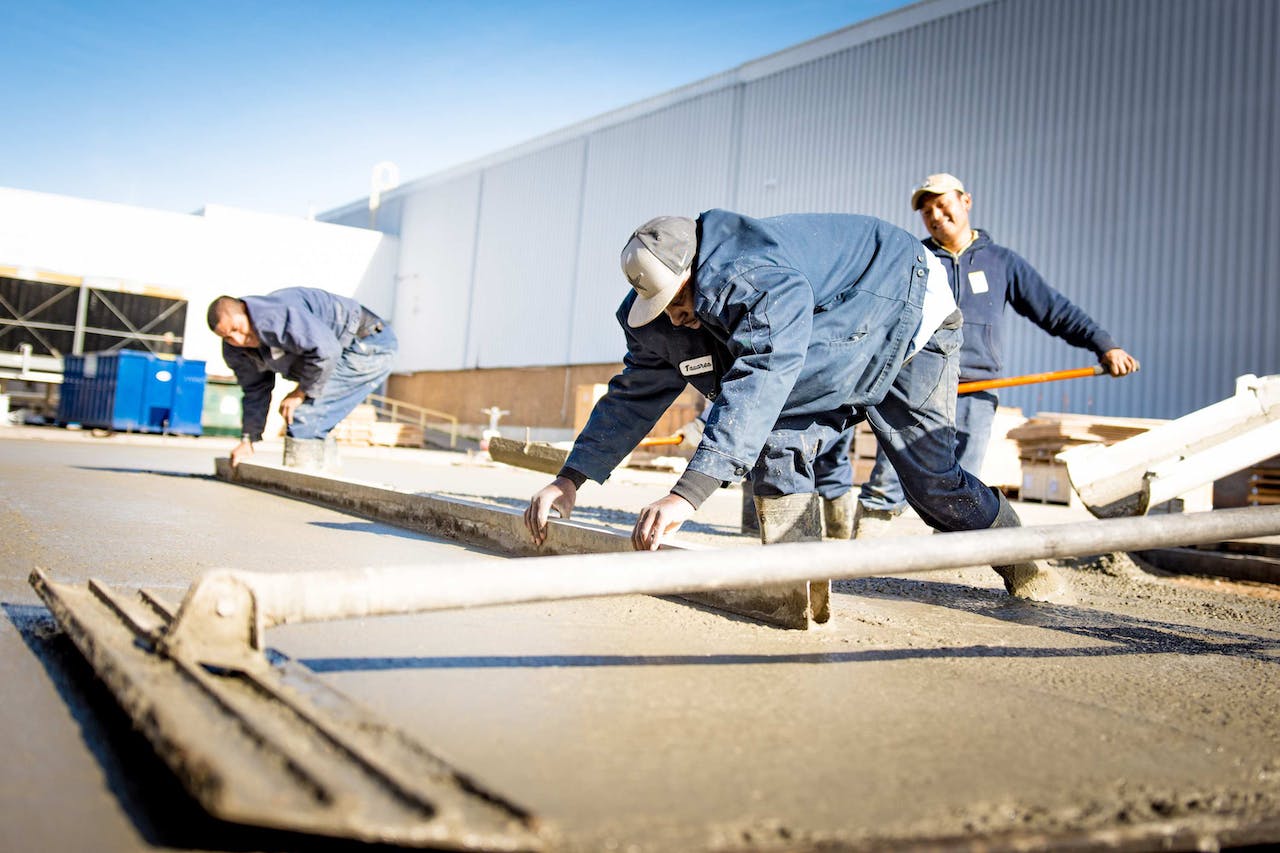 That type of resilience requires an ability to keep one’s eye on many moving parts. It’s what Chipley calls “multi-functionality.” He sees it in his employees, too, and believes it’s a major part of the company’s success. His clients agree.

“I think Roy is very particular about his employees and treats them well, so I think he has a really good personal relationship with the guys that work for him,” says Wayne Taylor of Five Star Automotive. “They’re not just an employee to him. I think he really cares about them. And you can kind of sense that from the guys on site also.”

“The same guys that you’ll see today pouring concrete can lay asphalt tomorrow,” Chipley says. “And if our guys in the shop need help, our guys in the field can turn wrenches, too. If you work for me, you will become a bit of everything, which is only to your advantage.”

Chipley’s jobsites attest to his relationship with his crews. During a concrete pour at a GE facility in Florence, guys on the crew threw jokes at Chipley from afar as he had his picture taken. As the crew laid a pad on a blustery January day, the jokes and laughter continued among the crew.

Equipment operator Nate Haney says that scene is a fairly typical day at the company.

“I was a union operator before I came here and I would go sit on a piece of equipment, and I wouldn’t come off that piece of equipment all day,” Haney says. “Here it’s not that way. Your people are more diverse here than at most companies that I’ve worked for, and I enjoy working for Roy. He’s a good man. His son is a good man to work for, too. They help you out in any way possible. They’re good to talk to no matter what it is that you have to talk to them about.” 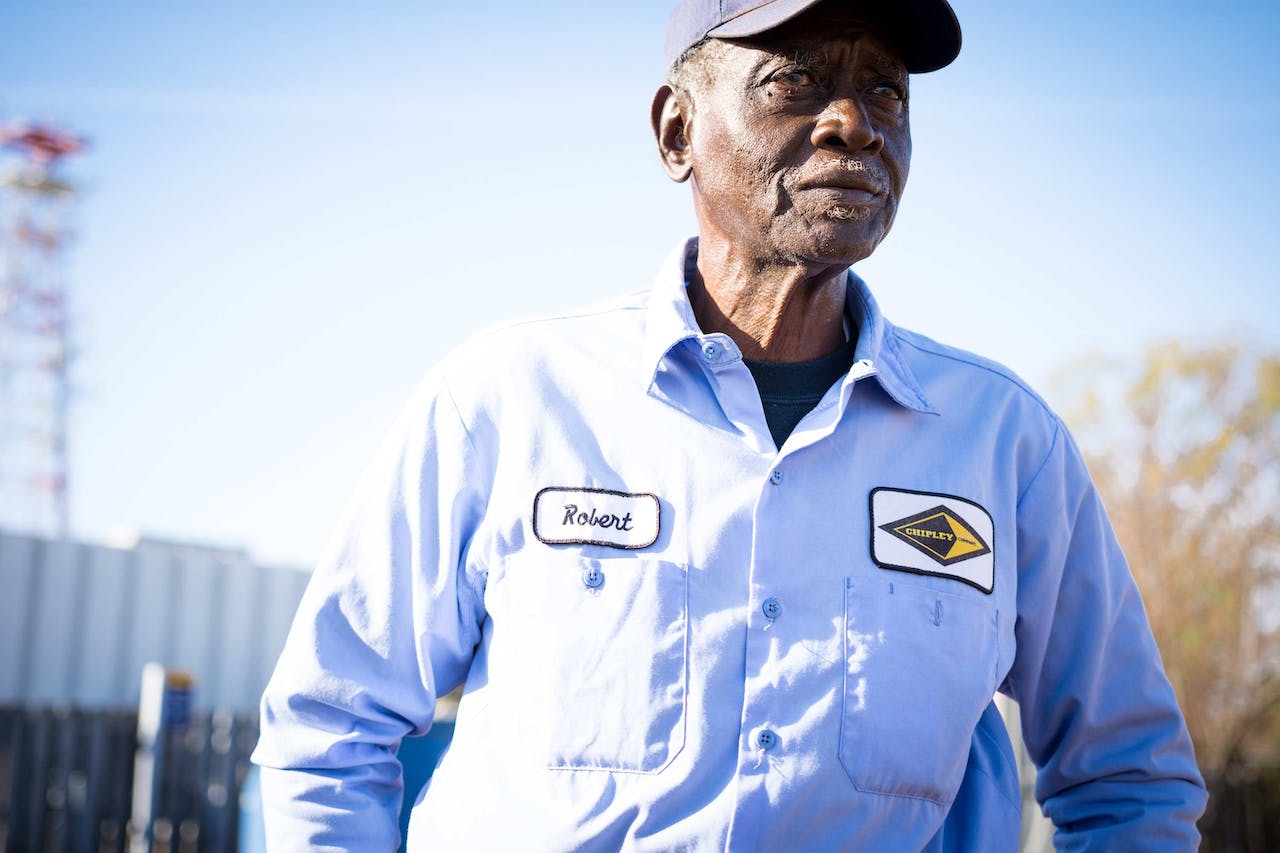 Chipley calls Robert Tumblin, who has been with the company for 56 years, vital to the business. Photo: Wayne Grayson

Another example of Chipley’s care for employees is his relationship with Robert Tumblin. The 71-year-old expert equipment operator has been with Chipley Company since he was 15 years old. “He came to me on his 62nd birthday and said, ‘This is my last day,’” Chipley recalls. He convinced Tumblin to stay, and nearly a decade later, it’s a decision that at least appears to be indefinite.

Chipley says he considers Tumblin to be not only a vital piece to the operation, but more important, he considers him to be family. To show his appreciation for Tumblin’s hard work over the years, Chipley threw him a surprise birthday party recently and handed over the keys to a new pickup. 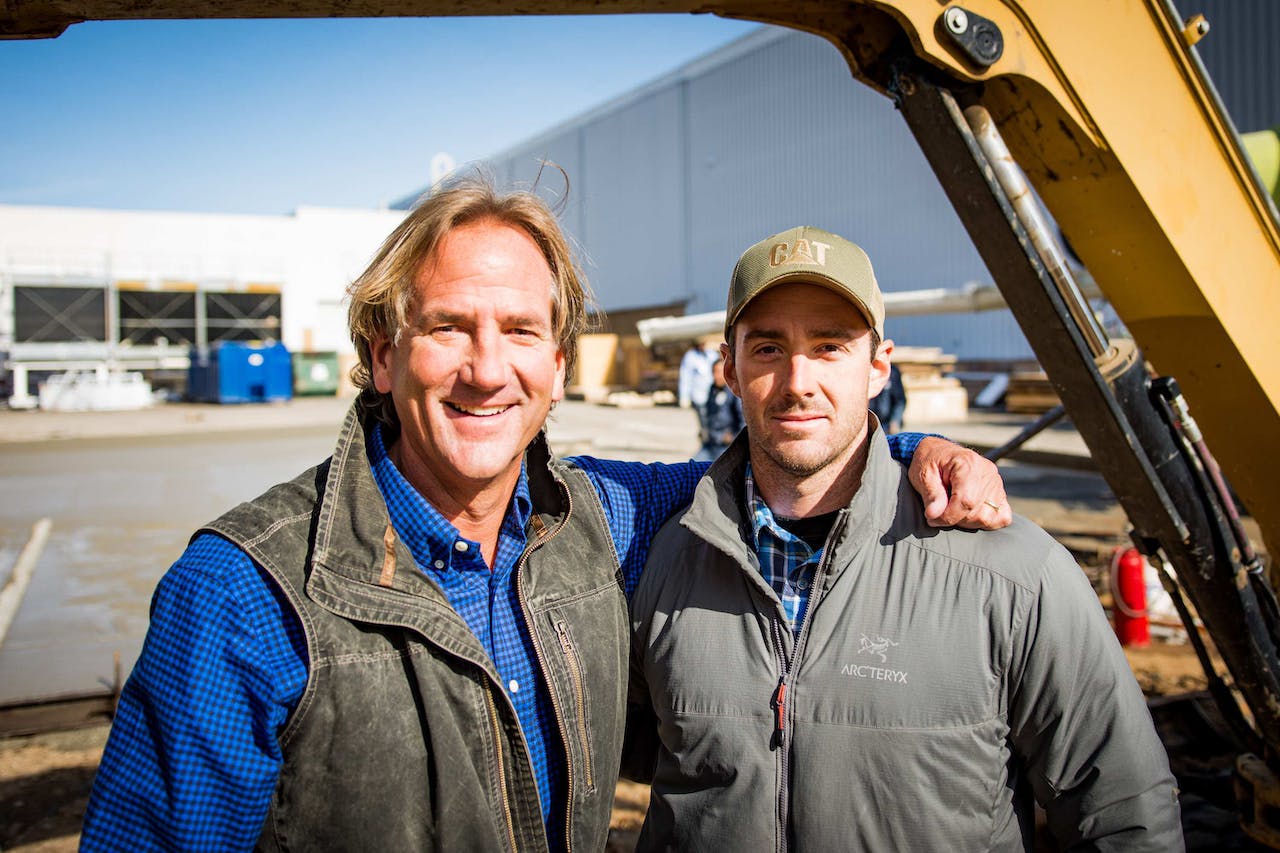 Chipley, left, says a succession plan is in place for transitioning ownership of the company to his son Marshall, right. Photo: Wayne Grayson

Just as Chipley’s father passed the business down to him, the Chipley Company legacy will continue. He plans to pass it down to his son Marshall, who now serves the business as a project supervisor. The company has a succession plan, and Roy says, when it’s time to hang it up, he knows the business will roll right along.

After all, every success requires a bit of disassembly. 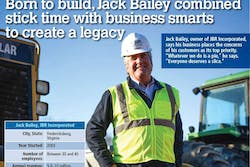 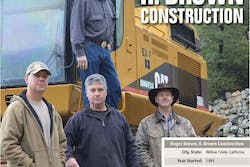 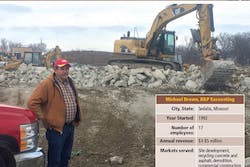 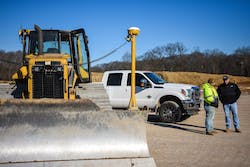