There’s no easy way to get to Willow Creek, California, where Roger Brown has been plying his skills as a contractor for more than three decades. Drive north on Interstate 5 until just near the Oregon border—and then hang a left into the some of the deepest woods and steepest mountains in the country. Keep going for another three hours.

But the mountains and the narrow winding roads that snake through them have been good to Brown and his three sons: Roger Jr., Kevin and Damon. In the rainy winters, rockslides frequently shut down the road, and in the dry summers, wildfires can erupt almost anywhere. Heavy equipment is necessary to alleviate both types of disaster, and these conditions require just the kind of quick response and expert equipment operation for which R. Brown Construction is well known.

And when Brown and his sons and employees aren’t battling Mother Nature’s erratic temperament, they find plenty of work doing traditional civil engineering jobs in this beautiful slice of paradise.

In big cities, most contractors would not help a competitor out, but Northern California has some of the most remote land in the country. The ethics are different. Cooperation is often more important than competition. “I like it here,” says Roger. “All my kids and grandkids are here. We have a good relationship with the rest of the people around here.”

The lifestyle isn’t too bad either, if you like the outdoors. Roger’s office is adorned with numerous stuffed animals, trophies that he’s hunted over the years. All three sons hunt as well, sometimes taking horses into the steep canyons and mountainsides, terrain where no vehicles could go.

Roger grew up in Arcata, California, on the coast about an hour west from Willow Creek. He went to college and met his wife in Redding, and stayed there for 10 years before going to work at his father-in-law’s construction company in Willow Creek. After turning 50 though, Roger was itching to try it on his own and formed his own company, eventually buying out much of his father-in-law’s fleet when he retired.

Part of that fleet included the first dozer he ran when he was working for his father-in-law – an ancient Cat D7. “People keep asking me why I keep rebuilding that thing,” Roger says. “But it’s just like part of the family.”

Roger started small, with a backhoe and a dump truck, and then gradually worked up from there. “We took jobs we knew how to handle,” he says.

Logging was a part of the company’s operation at first, and good work for the boys, two of which were in high school. Roger and the crews would fell the trees during the weekdays and then bring the boys out to set chokers on weekends.

Restrictions on timber cutting in the Northwest, and the costs of insurance and licenses grew to be prohibitive, so the company dropped logging and started developing additional skill sets in civil construction. Most of their work today is public construction, and about 80 percent is for CalTrans in Trinity and Humboldt counties.

California’s fires also create opportunities for skilled operators who can turn on a dime when the Forest Service calls. When a fire breaks out, R. Brown Construction will rent out its water trucks, low beds, and dozers to the Forest Service. They’ll also put their own crews on the job building fire breaks. After the fire, they’ll come in and do restorations, including putting in new vegetation. It can be tough work…14-hour days sometimes. On the tricky mountain slopes, they don’t use anybody who isn’t a crack machine operator.

And while fighting forest fires and clearing rock slides is a big part of the company’s work, Roger and his sons always look forward to trying new types of jobs and challenging applications.

A few years back, they built their first bridge – 80 feet long. They used a truck crane and bought a Cat telehandler just for the job. “It was out in the boondocks, no power out there. It was a neat deal,” says Roger.

The company also recently put in a complete water system for a local water district, with main and distribution lines and new pumps and filters. It included 6,000 feet of 6-inch pipe and 3,000 feet of 4-inch pipe.

On other jobs, they have used helicopters to put netting over slopes to protect against rock slides, says Damon. “That’s been around a while, but it was new to us. They have machines called spiders that crawl around on the slopes. We like jobs like that; jobs that we’ve never done before. We like the challenge.”

Roger Jr. is in charge of the equipment for the company. “Most of the stuff we buy used, low hours,” he says. “We’re always looking in the magazines and at online auctions for good deals. And we try to take good care of the stuff, so it lasts a long time.”

Taking care of their equipment necessitated a big shop, one which the company recently expanded. In the winter, they go over all their equipment with a fine tooth comb. “We don’t want breakdowns during the summer because you lose your productivity,” Roger says. “And we’re really strict on our air filters and oil changes.”

Roger Jr. says he’s impressed with the technology and productivity of some of the new equipment coming out these days.

Despite the challenges, R. Brown Construction has no shortage of satisfied customers. “Roger Brown is well respected in the industry,” says Rick Reinhard of Whitson Incorporated. “Most people, if they bid a job lower than Roger, recheck their numbers. He’s known for being thorough and competitive.”

“If I could work with Roger Brown every day of the week, I would,” says Matt Marriott of Apex Fence. “He’s always spot on with his schedule. When you need a hand, he’s willing to give a hand and he doesn’t say, ‘well it’s your bid, you figure it out.’”

Roger Sr. says he’s been fortunate that his three boys work in the business. “If it’s a tough job, they want to be in the seat, not standing around directing the work. They’re the hands-on type,” he says. His wife Nancy has been a big help as well, he says, running the office for many years.

His advice for contractors just starting out in this business is simple and direct: get a college degree so that you’re not limited – so you learn about the paperwork, regulations and business administration. “It’s not like the old school, when I learned from my father-in-law and where you bid a job, shake hands and start the next day.” 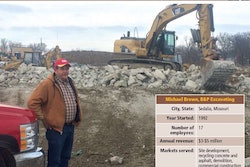 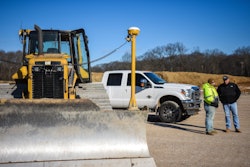 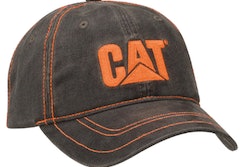