According to Terex, after the agreement is finalized, ASV will continue to sell its skid steers and compact track loaders under the Terex brand. Ron DeFeo, Terex chairman and chief executive officer, calls the joint venture “a positive for both Terex and ASV. Terex preserves its broad compact equipment product offering. Manitex will augment ASV’s existing distribution channels, allowing for faster growth of the ASV business.”

Included in the transaction, expected to be finalized before the end of the year, is ASV’s Grand Rapids, Minnesota, manufacturing facility and certain assets at Terex’s Southhaven, Mississippi, distribution center.

“We have sold businesses to Manitex and profitably owned their equity in the past,” DeFeo says. “They are a good aggregator and operator of machinery businesses, and we look forward to extending our value-creating relationship.”

The announcement came on the same day Terex announced it’s 3rd quarter results, in which it saw a 3 percent increase in sales yet a 30 percent decrease in profit in comparison with the 3rd quarter last year. 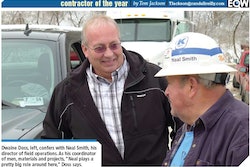