5 tips for hiring military veterans at your construction company 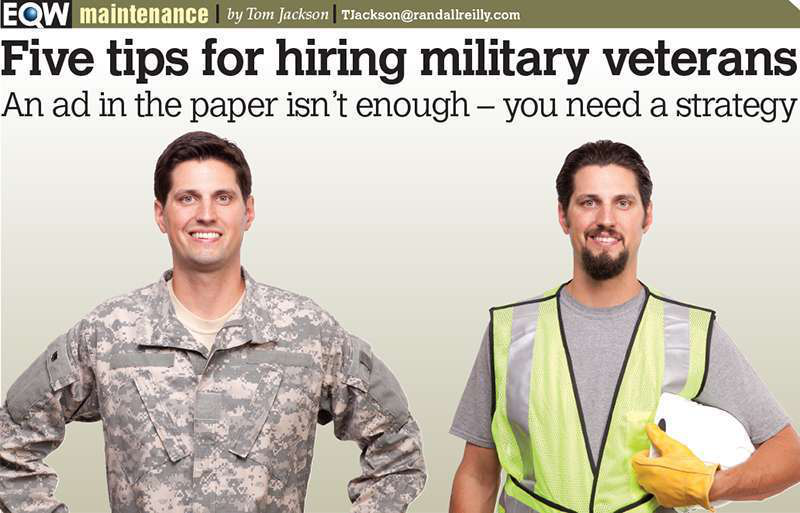 The economy is growing and construction contractors are scrambling for new employees. According to the Bureau of Labor Statistics, construction employment is expected to grow by 1.84 million jobs or 33 percent by 2020.

At the same time there are thousands of technically proficient people exiting the military every year and their numbers are expected to swell over the next five years as budget cuts reduce the size of the uniformed services.

As of late, the industry has seen quite the push to find these extremely qualified folks a place in construction. In February, more than 100 construction companies joined forces in committing to hiring more than 100,000 military veterans over the next five years. And in January, Hire a Hero, a similar hiring initiative for veterans run by the Armed Forces Support Foundation, announced that it had seen difficulty placing veterans in construction jobs. So, the foundation announced that it would launch Staff a Hero, a staffing company creating temp-to-hire positions and providing additional training for veterans.

For construction contractors looking to add skilled employees to their business there isn’t a better pool of candidates to choose from than the men and women transitioning from the military. But it can be a challenge to find them and convince them that your company is the company they need go to work for when they leave the service.

According to Dan Young, regional partner/manager at Orion International, to snag these high-value employees you need an “all-encompassing, enterprise-level strategy.” There are five key elements to such a strategy.

Military veterans aren’t going to beat a path to your door just because you put an ad in the paper. Your strategy should start with a marketing program to get your name out to the military community. And part of marketing is to do your homework. Learn who these people are, how their skills could fit within your organization and what their expectations are for a second career in the civilian world.

Marketing is not something most heavy construction contractors put a lot of effort into. But when it comes to military veterans, Young says, there are dozens, if not hundreds of other companies competing for these veterans’ attention. “You have to position your company as an attractive career opportunity and an employer of choice,” he says.

To get exposure to the widest possible military community you may need to hire a consulting firm with well-established ties to the transitioning military community, says Young. The construction contractors who do this typical have bigger goals than just filling a few empty positions. “They want a full-scale military talent program,” he says. This includes not only advertising in the periodicals that reach transitioning military personnel, but help identifying relevant job fairs and making connections with the military’s training schools such as the Seabees school in Hattiesburg, Mississippi, and Fort Leonard Wood, Missouri, where the Army trains its combat engineers.

2. Show them the benefits

Once you’ve enabled these prospective employees to find you, you need to be able to show them the benefits and advantages of working in the civilian sector and especially for your company. These are not newbies off the street, but well-trained, highly motivated and proven entities. But few of them know how things work or what to expect in the civilian world. What will attract them to your company are:

• Education and training opportunities. “Continuing education and training is a benefit that most veterans want,” Young says. “It is a critical factor, especially with the mid-level and upper level candidates,” he says. Advanced training is automatic in the military, but not always so in the civilian world. Many veterans will have their GI bill benefits and are looking for an opportunity that’s going to allow them to continue with their education while working.

• A healthy work/life balance. A big plus for contractors in the private sector is the ability to sell military people on the work-life balance, Young says. “As you can imagine, a lot of veterans don’t have a good understanding of what a healthy or reasonable work-life balance is,” he says. “That’s probably the biggest reason why the majority of veterans transition out of the service.”

• The benefits package. Additionally, veterans may not be familiar with the modern corporate benefit package including health care premiums, 401K plans and profit sharing. These need to be explained up front to prevent any misunderstanding with the first paycheck.

The companies that have the best records for retaining veterans also share certain cultural similarities with the military. The most important of these is camaraderie.

“If you poll 100 veterans about what they miss the most about the military I can guarantee at least 80 percent of them are going to say the camaraderie,” says Young.

“It’s ingrained in the military culture and that’s an expectation they have as they transition into corporate America.”

What is camaraderie? The military has long known that to survive in combat a unit’s people must have fierce loyalty for each other. Accordingly officers and NCOs are trained to lead by example. There are ranks, but no prima donnas. Officers do just as many pushups as privates, if not more. You work hard, you play hard and you will fight to the death for each other. The civilian world with its shifting alliances, office politics, hidden agendas and CEO worship can be an alien environment for transitioning military.

Companies are starting to recognize veterans’ affinity groups and employee resource groups are key elements in a program to retain veteran employees, Young says. And the payoff can be much bigger than just retention. By allowing veterans to network with other veterans who have similar backgrounds and experience in the military you’re helping to spread the reputation of your company as a top-flight place for veterans to land.

In other words, hire one veteran, and if he likes what he sees, he could bring in many more of his friends of equal caliber. “You would be amazed at how big the military is but how small the network is and how quickly the word can get around,” Young says. “We’ve been in business 22 years and probably half of our placements come straight from referrals.”

People coming out of the military are used to a highly structured environment. Officers and NCOs expect people to jump when they say jump and it isn’t always so in the civilian world.

That can be a problem, but increasingly it is not because civilian employers recognize and anticipate these differences. “It is critical to help them with that transition,” Young says. “There is more to it than just hiring someone. We reach candidates 12 to 18 months before they make that transition and we start the education process then. It’s having a very positive effect and leading to higher retention rates.”

Is it worth it?

Consultants, marketing plans, campaigns. If it seems like a lot of effort, 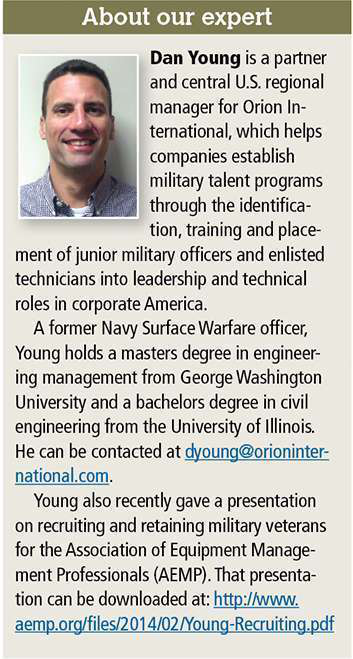 Young cites a long list of assets military veterans bring to any employer. Veterans, he says:

• Show up on time, every time.

• Don’t hesitate to go the extra mile even when things get tough.

• Understand the importance of safety.

• Know how to contribute to and build strong teams.

• Are drug-free and physically fit.

What it all boils down to is “leadership, skills, reliability and character,” says Young. “First and foremost you’re hiring people who are going to be with you a long time, your future leaders. You are hiring for the future of your company. That’s the most important thing.”