After its acquisition by private equity firm Platinum Equity — finalized in January –Volvo Rents has been rebranded BlueLine Rental.

With 130 rental stores in North America, BlueLine will continue to rent Volvo backhoes, skid steers, compact wheel loaders, compact excavators and compaction equipment, along with other machines and tools.

Scott Hall, president of BlueLine, and former president and CEO of Volvo Rents, says Platinum Equity’s ownership will give the company “new opportunities to grow and build on the fundamentals that have made us successful — our commitment to service and the way we treat our valued customers and employees.”

Volvo established its rental business in 2001, but decided the best course was to sell, said Olof Persson, Volvo Group president and CEO, when the $1.1 billion deal was announced.

In 2011, the company announced it would shift from a solely franchise network to a mix of franchises and company-run stores. 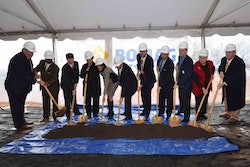