As part of its exhibition area at the Bauma show in Munich last week, Fayat Group showed off an autonomous tandem roller.

When Melker Jernberg, Volvo Construction Equipment president, is asked why North American contractors would buy a battery-powered electric-drive machine, he quickly counters with “why should they not?’”

Volvo CE turned heads in January when it announced it would unveil its ECR25 compact excavator and L25 compact wheel loader at the Bauma trade show, taking place in Munich, Germany this week.

Not because they were zero-emissions electric machines — that’s becoming an every-other-day announcement — but because the company also announced that it would eventually no longer offer diesel versions of these machines.

With so many electrification product announcements at Bauma, Cat’s release on its “strategic approach to electrification” during the show has a “wait and see” feel to it.

In the statement, Cat says “we are ready” when it comes to electrification.

Although not mentioned specifically in the statement, Cat’s recent investment in electric car maker Fiskerpoints to Cat’s definite interest in exploring battery technology. (In announcing the investment, Fisker said Cat’s investment is intended to spur the development of  “solid-state battery technology with applications in construction, energy, storage, transportation and mining.”)

On Monday at the big Bauma show in Munich, Case Construction Equipment took the wraps off a striking wheel loader concept dubbed the “ProjectTetra.”

The reveal came at the beginning of the show, Germany’s equivalent of ConExpo. While most OEMs at the show were touting electric drive and hybrid systems for greenhouse gas reductions, Case put its focus on fuel. In this case natural gas, rather than diesel.

The engine for the Tetra, which can run on natural gas, biomethane or liquified natural gas (LNG) was developed jointly between Case and its sister company FPT Industrial and, according to the company, delivers the same performance as its diesel equivalent. 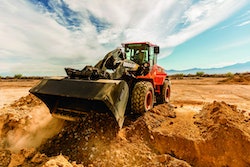 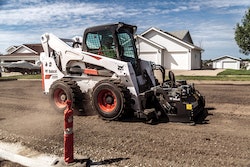 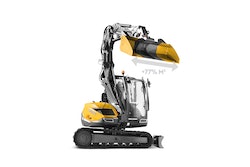