On Monday at the big Bauma show in Munich, Case Construction Equipment took the wraps off a striking wheel loader concept dubbed the “ProjectTetra.”

The reveal came at the beginning of the show, Germany’s equivalent of ConExpo. While most OEMs at the show were touting electric drive and hybrid systems for greenhouse gas reductions, Case put its focus on fuel. In this case natural gas, rather than diesel.

The engine for the Tetra, which can run on natural gas, biomethane or liquified natural gas (LNG) was developed jointly between Case and its sister company FPT Industrial and, according to the company, delivers the same performance as its diesel equivalent.

Case says the engine is a six-cylinder and delivers up to 230 horsepower.

In addition to the low carbon fuel angle, the Tetra concept employs futuristic styling and an advanced operator environment which makes extensive use of touchscreen and voice control technologies. Additionally, the loader’s safety systems include biometric and obstacle detection systems derived from CNH’s Industrial autonomous vehicle research and development program.

According to the company press release: “Case has demonstrated the feasibility of this concept in a range of real-world construction environments as well as proving the business case, in terms of sustainability, reduced overall total cost of ownership and operational viability.”

Key design features include a forward cab stance; high-visibility, 360-degree glazing (16 percent more than a standard wheel loader); a high visibility roof panel, which provides the operator with an unfettered view of the bucket throughout the entire loading arc; and an industry-first sliding door.

Michelin flat-proof honeycomb tires round out the futuristic look.

The company has not divulged what aspects of the Tetra will migrate into their regular wheel loader lineup, or if they will be seen in the American market, but with ConExpo less than a year away it’s probably a safe bet that we’ll see more of this concept in the future. 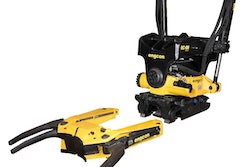 Engcon to introduce GRD70 grab cassette for its largest tiltrotator 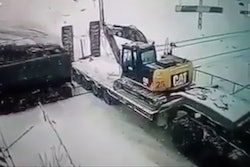 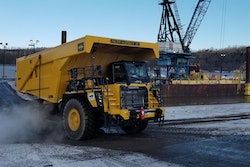