Cargill Deicing Technology displayed the WinterPave asphalt anti-freeze product, which lowers the freezing temperature of water on a road surface, at the 2016 North American Snow Conference in Hartford, Connecticut. The company is the exclusive U.S. distributor for the product.

Rather than a topical product broadcast on pavements, such as salt, WinterPave is added to an asphalt mix before application, replacing 5 percent of the fine aggregate weight.

“It goes into virgin asphalt at the plant, then it’s applied with the same exact asphalt equipment as a regular road would be,” says Debby Capela, business development/marketing manager. “There’s nothing different about the application. And you can compact it the same way.”

Over time the product migrates to the surface of the pavement, as it is attracted to moisture, she explains. “It’s really a perpetual anti-icer. In the U.S. we’re going on our fifth winter and its working better now than ever, so it’s still coming through fine.” It ultimately sets in roughly the top 1 1/4 inches of the asphalt.

Capela adds WinterPave is best for what she calls “black ice” states, including the current installation states of Ohio, West Virginia, Virginia and North Carolina. Instead of solid ice at 17 degrees on a regular road for example, a WinterPave road will only have “crumbly” ice that can be pushed aside with little effort. 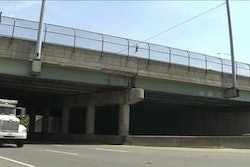 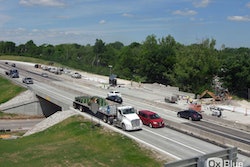 MoDOT slides I-70 bridge into place over Garth Ave.