New research changing how you will build bridges 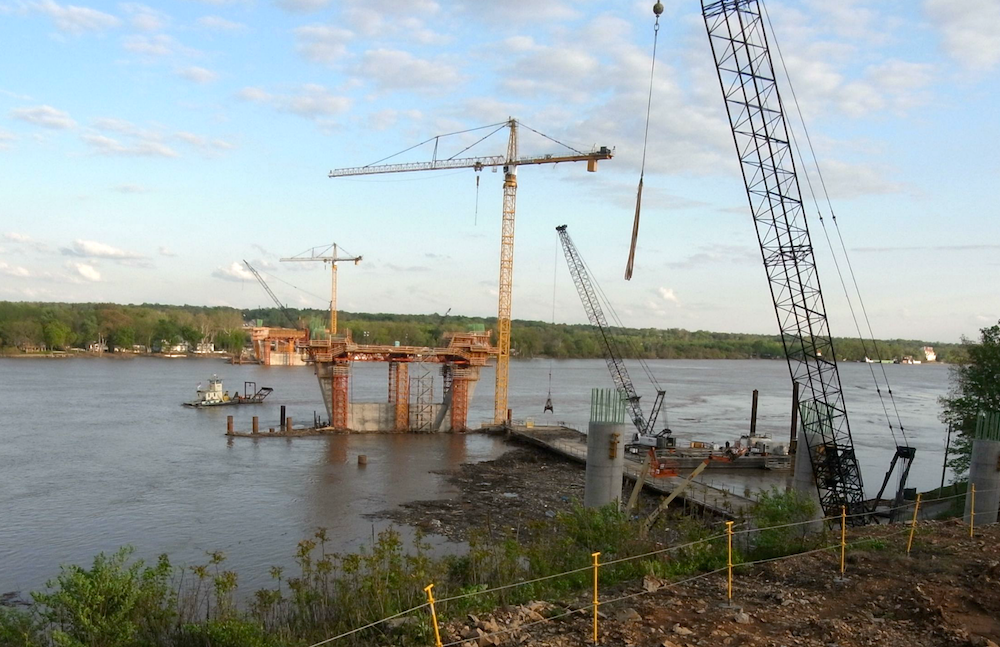 Eliminating the “end-bump” in construction of bridge approaches … precast deck panels speeding bridge construction … quick seismic retrofits for bridge piers … and how rockets can speed construction of suspension bridges in isolated areas. Each of these topics will change how bridges will be built in the future, and they were among the themes in bridge design and construction that were presented at the 2015 Transportation Research Board meeting.

Differential settlement in Louisiana leads to what are called “end bumps” at the approaches to bridges there, posing a safety hazard as well as being disruptive to motorists. But researchers at Louisiana State University say they’ve come up with a new construction design incorporating precast deck slabs paired with geotextile-reinforced approach embankments that will solve the problem.

These bridge approaches, which connect the bridge deck to the adjacent pavement, are normally built with reinforced concrete slabs. The Louisiana Department of Transportation and Development, however, received complaints about the roughness of the transition between the bridge abutments and embankments: 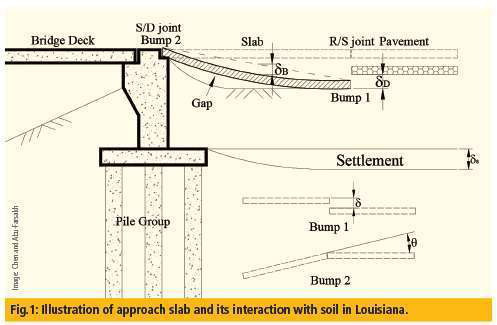 “Field observations indicated that either faulting at the roadway pavement/approach slab joint (R/S joint) or a sudden change in the slope grade at the approach slab/bridge joint (S/D joint, shown in Fig. 1) causes this ‘bump’,” say the research authors1.

To solve the problem the LaDOTD considered changing the design of approach slabs where differential settlement is expected. The state wanted to find a solution that makes approach slabs strong enough to allow them to lose a portion or all of their contact supports without causing detrimental deflection.

“In this solution, the flexural rigidity of the approach slabs is increased through increasing both the slab thickness and the reinforcement ratio,” the authors write. “Consequently, some embankment settlement will be allowed without decreasing the ride quality. As a result, the slab dead load and traffic live loads will be carried by the two ends of the slab rather than distributed over the length of the slab.”

Accordingly, the local soil pressures beneath the strip footing (or “sleeper slab”) increase, resulting in an increase in the faulting deflection. This can be solved by use of geosynthetics to reinforce the soil beneath the sleeper slab, thereby increasing the soil’s bearing capacity, helping redistribute the load to wider area, and thus reducing the sleeper slab’s settlement, they researchers say.

To validate this approach, several research projects were initiated by LaDOTD. Field performance – including deformation and internal stresses of the concrete slabs, contact stresses between slab and embankment, stress distributions within the reinforced soil foundation, and strain distributions along the geogrid – was monitored for two years.

• The west approach slab of the Bayou Courtableau Bridge, with the new design method, retained its contacts and supports from the embankment soil during the first static load test (at the time when the bridge was ready for traffic). However, during the second static load test, after about a year and half, the west approach slab lost most of its support from the embankment soil.

• On the other hand, the east approach slab, with the traditional design method, showed slightly gradual loss of its contacts from the embankment soil starting from bridge abutment side towards the pavement side.

Accelerated bridge construction depends on the use of precast, prestressed and otherwise prefabricated bridge elements and systems, but their success depends on how well they are implemented. New research from TRB2 indicates that connections and grouts used are the weakest links in the process, but application guidance is available that will ensure long-life performance.

Noting that prefab deck panels have gained popularity, the authors of the paper point out the primary challenge for deck systems is the connectors, typically made using interlaced connector elements and field-cast grout. “Poor detailing and design considerations have been shown to pose problems with deck durability, serviceability and ultimate capacity,” the authors say.

“Seventy two large-scale, deck-level connection assemblies were tested in four-point bending and subjected to cyclic crack loading, fatigue loading, and monotonic loading until failure,” the authors say. The three loading protocols allowed researchers to assess the durability, serviceability and ultimate strength of the connections. Their conclusion: the performance of these connections “is heavily influenced by the grout and the precast component interface surface preparation.” They also determined:

• The selection of grout materials is a critical design consideration for deck-level prefabricated bridge elements and systems connections. This assumes that lap splice lengths have been selected such that bond failure does not occur.

• Depending on the grout material selected, surface preparation of precast concrete deck panels can have a significant impact on tensile bond resistance of the panel-to-grout interface.

• Although epoxy grout and ultra-high performance concrete grout systems have higher initial cost, they could provide better value when long-term performance and required maintenance are considered.

• Non-shrink cementitious grout and magnesium phosphate grout may lead to durability issues as a result of poor bond to precast concrete regardless of surface preparation, and poor performance under repeated loading.

• The epoxy grout exhibited good bond with precast concrete regardless of the surface preparation.

Hybrid jacketing – made up of a thin cold-formed steel sheet wrapped around an earthquake damaged reinforced concrete column – offers a fast solution to getting bridges reopened following a seismic event, says one research team.3

Such a jacket, which is also supported on the outside by prestressing strands, was tested using a large-scale RC column with a deficient lap splice (where two pieces of rebar are overlapped to create continuous reinforcement), typical of pre-1970 bridge constructions in the central United States. The testing was done in mid-Missouri, a seismically active state.

Results from original and repaired columns were compared by several factors, including strength, stiffness, ductility and energy dissipation. The authors concluded the hybrid jacket was effective in “restoring structural behavior of the damaged column to prevent bridge collapse.” Other points in its favor: it’s a lightweight, quick to field product, cost-effective solution that can be implemented in hours.

• The initial stiffness is [only] partially restored, due to existing damage in concrete and reinforcement.

• The confining pressure exerted by prestressing strands is adequate for shear transfer between the steel jacketing and column; no adhesive epoxy or dowel reinforcement is required

• Prestressing cables could sustain the active confining pressure up to 6 percent lateral drift with no significant prestressing force loss.

China’s centuries-old prowess in gunpowder and fireworks now has a new application: the use of rockets to fire the “pilot” or initial guide ropes for suspension bridges across voids in remote, mountainous areas, according to a 2015 TRB paper from China.4

There are many pilot rope erection methods as part of the suspension bridge construction; these include water towing, manual hauling and air traction, the authors say. But these all may not be available for construction of suspension bridges in rugged, remote areas, now being reached by China’s growing highway system.

“For constructing long-span suspension bridge[s], erection of [a] pilot rope is the first step of the superstructure construction, which provides the foundation for the load-bearing cable catwalk traction system to be constructed [following] the pilot rope,” the authors note. “However, erection of pilot rope under certain mountainous terrain conditions can be extremely challenging.”

The Yunnan Puli long span bridge is a 3,412-foot suspension bridge in the Karst region of China, crossing a canyon more than 1,968-feet and extremely steep on both sides. Ever-changing weather and thick vegetation covering the ground made it difficult to erect the pilot rope using the traditional methods.