One of the world’s largest floating cranes has officially reported for duty at the site of New York’s upcoming Tappan Zee Bridge replacement.

The crane, dubbed the “Left Coast Lifter” for its role in the construction of the new eastern span of San Francisco-Oakland Bay Bridge, will “greatly” reduce construction time and cost of the new $3.9 billion Tappan Zee span, according to a report from the Associated Press.

That’s due in large part to the fact that the crane can lift 1,900 tons and has a boom that extends to approximately 328 feet. Crews will use the crane to lift massive pre-assembled portions of the bridge into place, according to the AP report.

The old Tappan Zee span opened in 1955 and will be demolished once the new span is completed.

The giant crane has actually been in the area since February after traveling 6,000 miles from the Port of Oakland to New York Harbor. But as ENR details, it had to be unfolded, tested and re-outfitted over the summer before floating up the Hudson River and arriving for work yesterday.

When it arrived in New York earlier this year, workers and officials give the crane a new nickname, the “I Lift New York.” 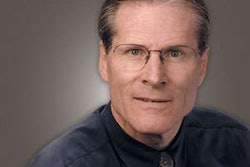