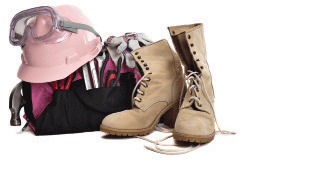 The Saga Continues with ‘Booth Babes’ and the S.T.E.A.M. Professions’ Post

I wasn’t sure at first what kind of reaction I would get to the “‘Booth babes’ and the S.T.E.A.M. professions” blog post I recently wrote (betterroads.com/booth-babes-and-the-s-t-e-a-m-professions), but it has really generated reader dialogue. In fact, I’ve been able to post several reader responses, some of which I have shared here. I spent a week at World of Concrete 2014 in Las Vegas in January to learn about the latest technology, see new and updated equipment and talk with manufacturers, contractors and agency transportation professionals, enhance my industry knowledge and build relationships. However, when I was on the tradeshow floor I was a bit disappointed to see that some exhibitors are still hiring “booth babes,” doing a disservice to the Science, Math, Engineering, Art and Design, and Technology (S.T.E.A.M.) professions. (You can read the original post, but I think the reader responses are more entertaining.)

Male reader and well-respected industry figure, “J.A.M.,” said, “I am a middle-aged male, relatively well-known industry professional who appreciates an attractive woman’s figure as much as most men do. But it is almost embarrassing to walk up to a vendor whose products in which you may actually have interest and feel like a voyeur because of the ‘eye candy’ standing around. I for one don’t want to risk the appearance in my colleagues’ eyes of being interested in that aspect of the booth vs. the actual product displayed.” For the rest of his comments, go to betterroads.com/one-reader-responds-to-booth-babes-blog-post.

A female equipment manager shared a story, which I found very amusing. She brought her husband with her – an imposing figure at 6 feet, 7 inches tall – who does not work in the construction industry. When the couple would walk up to booths together, he developed this response for when sales people would automatically walk up to him and ignore her: “That sounds great, but I didn’t understand anything you just said. You need to talk to her! I’m just here to hold the bag.” She said this gave her a nice chuckle and then added, “I guess my husband is kind of my own personal booth babe.” For more reader feedback and stories, go to “The Saga Continues: More readers share stories, opinions on ‘booth babes’” at betterroads.com/the-saga-continues-more-readers-share-stories-opinions-on-booth-babes.

8 Strange Interview Questions (or How Not to Get Hired)

After reading an article about this in Fast Company (fastcompany.com/3025457/leadership-now/8-of-the-strangest-interview-questions-job-candidates-have-asked), I felt like I had just looked at an article out of The Onion, a satirical (but in my opinion, very well-written) take on real news.

These questions asked by potential job candidates showcase bad manners and are just downright odd. One candidate’s mom came along for an interview because she was afraid her shy daughter might forget something important. Another job candidate asked the potential employer to pay him less than a living wage so he could stiff his wife in their divorce. Then there was the interviewee who asked if it was OK if he barked at the dogs in the pet-friendly office to show his dominance. You can’t forget the candidate who asked to eat lunch during the interview, the one who asked if it was OK to grab snacks from the kitchen, the candidate who wanted to know whether the potential boss was single and the job applicant who asked when she would be able to pass a drug test if she had just smoked marijuana. For The Roadologist post on this, go to betterroads.com/8-strange-interview-questions-or-how-not-to-get-hired.