The upgraded edition of Grove’s popular GRT8100 has received several improvements, including a new chassis, updated engine and transmission package and a new wider cab with enhanced operating features.

The 100-ton rough-terrain crane has a 154-foot-long boom. The new chassis design allows customers to add the MAXbase variable position outrigger system, which offers up to 15% capacity improvements in certain configurations, Manitowoc says. The -1 model has the same 360-degree load charts, overall dimensions and counterweight as its predecessor.

A new wider, full-vision cab offers a tilt/telescopic steering column, a wider, heated, electrically adjustable seat, and a three-camera package. A new LED lighting package includes new installations on each side of the carrier plus dual, front-mounted lights on the 20-degree tiltable cab for a clearer view of the load and fewer blind spots.

Deliveries to customers are expected to begin in early Q2 next year.

At full extension, the 70-metric-ton crane will be able to lift 4.4 metric tons, while at 160 feet owners will be capable of picking loads of up to 8.3 metric tons. At its maximum radius of 150 feet, the GMK4070L can lift 1 metric ton.

Manitowoc says the model can take on jobs that would typically require larger cranes, thanks to its 255-foot maximum tip height when the 196-meter main boom is paired with a 49-foot swing-away jib option.

The crane is powered by a 430-horsepower Mercedes Benz OM470LA 6-cylinder diesel engine. The Tier 4 Final engine is approved for use with HVO diesel.

The frictionless, maintenance-free Telma braking system will reduce the risk of overheating and overall wear and tear on the conventional service brake system, Manitowoc says.

The GMK4070L will be one of the first Manitowoc cranes to offer the new Grove Connect digital platform, which provides owners with real-time insights into the crane’s performance with just a couple of taps on a screen. Service technicians can also access the data for remote troubleshooting.

The MR 229 is the first of a new generation of Potain luffing jib tower cranes and the first luffing jib crane to feature Manitowoc’s Crane Control System and the new Potain CONNECT telematics offering.

The design of the 14-metric-ton capacity crane offers reduced wind vane spans for easier installation on constrained jobsites. The out-of-service radius is between 32 and 39 feet. The MR 229’s 180-foot jib end has a capacity of 2.7 metric tons. A choice of hoists are available, including the 110 HPL 35 from the High-Performance Lifting range, capable of reaching speeds of up to 679 feet per minute.

Filling the gap between the MDT 139 and MDT 189, the new 6-metric-ton capacity MDT 159 is ideal for small to midsized building projects up to 10 floors, Manitowoc says.

The topless concept is designed for multi-crane work sites as it reduces the clearance needed for other cranes passing overhead or underneath. Three containers are needed to transport the crane’s full upper section, making it simpler to get the crane on and off the jobsite.

For greater versatility, operators can choose between two new trolley systems: the DMP or the SM/DM Quick Lock. The DMP trolley offers permanent double reeving, meaning no adjustment to the ropes is needed on site and the crane’s maximum capacity of 6 metric tons is permanently available. The SM/DM Quick Lock trolley can automatically change reeving at the flick of a switch.

Manitowoc will not be participating in North America's largest construction equipment trade show, ConExpo-Con/Agg in Las Vegas in March 2023. As an alternative, the company intends to host a Crane Days event at its Shady Grove, Pennsylvania, location at a later date. 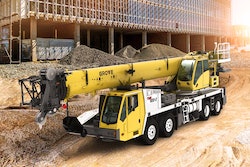 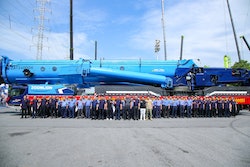 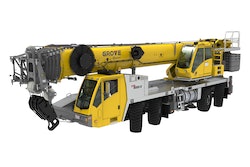