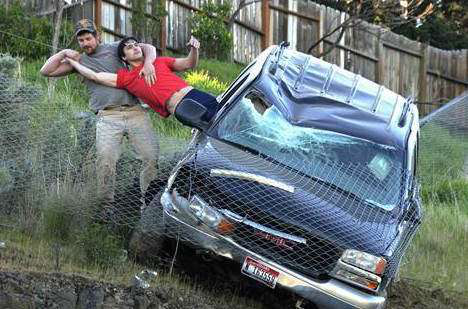 A construction worker came to another man’s rescue earlier this week in Idaho following an automobile accident that came inches from turning deadly.

According to NBC News, Jason Warnock, a 29-year-old construction worker, was driving Bryden Canyon Road in Lewiston Wednesday morning when he saw a log in the road. Warnock looked up the roughly 30-foot cliff bordering the road to find a GMC Yukon dangling there.

The only thing keeping it from nosediving to the road below was a chain link fence.

Warnock told NBC he hopped out of his vehicle and began running as fast as he could. He accessed the SUV via a pedestrian bridge. “I didn’t think I was going to make it,” he said recalling his work boots slowing him down.

When he reached the car, the disoriented driver, 23-year-old Mathew Sitko, rolled down the passenger-side window. Warnock said at first Sitko was more concerned about his iPod and began reaching for the device before Warnock asked for his hand and pulled him to safety through the window.

In talking with NBC, Lewiston interim police chief Roger Lanier said the crash was the result of “some sort of mental or emotional episode,” adding, lyrics in a song Sitko was listening to as he drove, “convinced him that it was essentially his time to die…He just closed his eyes, took his hands off the wheel, and pressed the accelerator.”

“After I pulled him out I hugged him,” Warnock said. “And we sat down and talked about the Bible.”

You can watch an interview with Warnock below.