A California contractor faces fines totaling $242,600 after a 33-year-old worker died in an unprotected trench, according to Cal/OSHA.

Two workers were in a trench installing two storm drain pipes July 27 on a residential job in Dale City. When the 14-foot-high trench wall collapsed, one worker escaped but the other, Abel Sauceda Quiñónez of Modesto, was trapped under the dirt and crushed to death.

Platinum Pipeline of Livermore was cited with 10 violations, including not protecting its workers from the cave-in.

“Excavations must be properly shored, sloped or shielded before workers enter,” said Cal/OSHA Chief Juliann Sum. “The employer overseeing this operation understood the hazards but did not take the necessary steps to protect its workers.”

Cal/OSHA said the company knew the soft soil was unstable—as a large crack had formed—yet told workers to continue grading the bottom of an unprotected section of the trench. The company had sloped the ends of the trench to prevent cave-ins, but “one side was not sloped because of concerns that a nearby utility pole might fall,” the agency said.

The company faces two willful violations for failing to ensure that no employees were in the trench without an adequate protective system and for failing to remove workers after a competent person observed cave-in hazards. A willful violation occurs when the employer is aware of the law and violates it or when the employer is aware of the hazardous condition and does not address it.

The company also faces five serious violations for failure to secure the utility pole and various excavation safety hazards, such as placing excavated material too close to the edge of the trench, Cal/OSHA says.

A serious violation occurs when there is the possibility of death or serious harm from the hazardous condition. Platinum also faces three general violations. 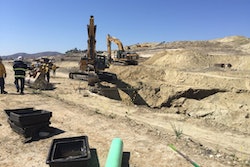