A construction worker at the jobsite of Baylor University’s new football stadium was killed Tuesday after he and another worker fell into the near-freezing waters of the Brazos River in Waco, Texas.

The man was identified as Jose Dario Suarez, 55, of Manor, Texas, according to a report from Waco TV station KWTX.

Suarez and a co-worker were working from and safety harnessed into the basket of a boom lift. The men were working on a pedestrian bridge that will connect the new stadium to the Baylor campus. The lift was positioned atop a platform in the river below the bridge.

The lift toppled over into the water before 4 p.m. Tuesday and took the two men with it. The other worker was able to remove his safety harness after plunging into the cold river and was quickly rescued. He was treated for hypothermia at a nearby hospital.

Suarez was pulled from the river by divers at around 8:15 p.m. Tuesday night from 16 feet of water. “He was still attached to the equipment with his safety harness and flotation devices,” Waco police Sgt. W. Patrick Swanton told KWTX.

The KWTX report said Occupational Safety and Health Administration investigators were at the scene on Wednesday afternoon though it is still unclear why the boom toppled over. Work on the $9 million bridge was brought to a halt for the investigation though work on the nearby stadium continued.

The $260 million stadium will be the new 45,000-seat home of the Baylor Bears and is scheduled to be completed in time for the start of the 2014 season. 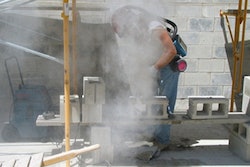 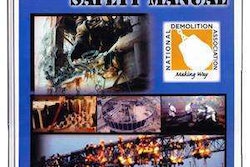 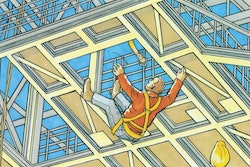 6 tips to avoiding Fatal Falls on the construction jobsite