It’s been a big year for the Chicago Cubs. First, they got a new manager when Joe Maddon decided to walk away from the Tampa Bay Rays. It worked out. Maddon and players like Kris Bryant and pitcher Jake Arrieta have pushed the Cubbies into a pennant race with the Pittsburgh Pirates and St. Louis Cardinals.

And since the end of the 2014 season, the Cubs’ historic Wrigley Field has been undergoing $575 million in renovations not expected to be completed until 2019. Despite a few complications and annoyances with the ongoing construction, everything is looking up for Cubs fans.

Which is exactly why a rival fan would want to strike the fear of a jinx into their hearts.

According to a report from NBC Sports, a construction worker and fan of the cross-town White Sox is claiming he buried a World Series Champions hat celebrating that team’s victor in 2005 in cement while working on the Wrigley renovations. The photo above, shared by Allison Horne on Twitter, is what the worker told Horne is proof of the act.

The Cubs tell Fox 32 they don’t believe the worker actually went through with the deed, however, and say even if he did, they don’t care.

“A spokesman for the Cubs says they won’t do anything because they doubt the picture is legit.

Cubs President Theo Epstein was more to the point when FOX 32 asked him about the cap controversy as he walked past the park. He told me–quote: ‘I couldn’t give two….’

Well, I can’t say that word but it rhymes with hits.” 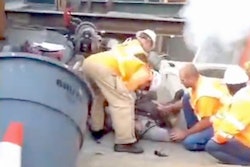