Ford dismissed the tests as marketing stunts and told “Hard Working Trucks” that its lead over competitors in the pickup segment continues to grow.

Chevy reports subjecting a 2016 Chevrolet Silverado and a 2016 F-150 to the same three puncture tests on the vehicles’ truck beds. Twelve pairs of trucks were used during the tests, most of which were conducted in front of consumers invited by Chevy.

In one test, 55 landscaping blocks weighing more than 825 pounds were dropped from a skid-steer bucket five feet above the truck beds.

In the tool box drop test, a tool box weighing 28 pounds was pushed diagonally off the side rail of the truck bed so that a corner of the box would strike the floor of the bed. After a dozen drops, the Silverado had two punctures while the F-150 had 13.

“I think we’ve got Swiss cheese for a truck here,” one observer is heard saying on the video while looking over the damage in the bed of the F-150.

A puncture test held in a GM research lab revealed how samples from both truck beds could withstand increased force delivered from a mechanized 17-pound wedge striker. At 40 joules of impact energy, all 20 of the F-150 bed samples were punctured by the wedge, while the Silverado samples were dented. Pinhole punctures were observed in the Silverado samples at 90 joules.

“We engineer and build our trucks with customers’ expectations in mind. For example, Silverado features a roll-formed, high-strength steel bed because truck customers demand the ability to haul their toys, tools and other cargo,” said Sandor Piszar, Chevrolet truck marketing director.

“These videos demonstrate the real-world benefits of the Silverado’s bed, in both extreme and everyday scenarios.”

When we asked Ford spokesman Mike Levine about the bed tests, he replied:

“When you’re the market leader for 39 years, competitors sometimes try to take shots at you with marketing stunts. The fact remains that F-150’s high-strength, military grade, aluminum alloy cargo box offers the best combination of strength, durability, corrosion resistance, capability, safety and fuel efficiency ever offered in a pickup. We have built nearly a million new F-150s, and our lead over the competition continues to grow.”

On gm-trucks.com, a GM truck enthusiasts’ forum, a member said he’d like to see how both trucks would have fared with bed liners during the tests.

“So far I haven’t seen one 2014-2017 customer owned truck without a bed liner,” writes Carl B., who reports having a 2015 Silverado. “It might be a really great ad for Line-X or for the Ford salesmen to sell bed liners with their trucks.” 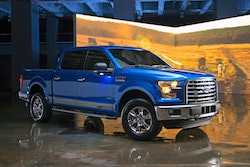 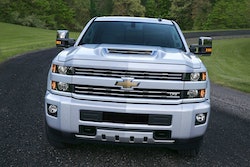 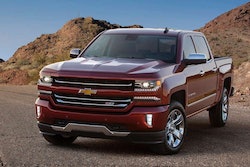