Nearly 18 months after announcing the engine as a powertrain option for the Chevrolet Silverado 1500 coming late in the 2019 model year cycle, and being unable to ship it on time, GM has finally provided details on its new 3.0-liter Duramax diesel along with the promise that it will ship with the launch of the 2020 models.

The first inline-six turbo diesel ever offered in a Chevy half-ton truck, the 3L Duramax delivers 277 horsepower and 460 lb-ft of torque, delivering 95 percent of peak torque at 1,250 rpm. Chevy says peak torque is sustained from 1,500 rpm through 3,000 rpm.

The 2020 Silverado 1500’s 277 horsepower is currently the most offered by a diesel engine in the half-ton segment.

The engine is paired with a 10-speed automatic transmission and has exhaust braking—a huge feature for anyone who has wished towing and hauling were a bit more comfortable with Chevy’s half-ton pickups.

You can read Chevrolet’s more exhaustive details on the 3L Duramax and all its features below.

The 3.0L Duramax cylinder block is made of a cast aluminum alloy that provides the strength required to support the high combustion pressures that occur within a diesel engine, while also offering an approximately 25 percent mass savings over a comparable cast iron engine block. Iron cylinder liners are used within the aluminum block to insure truck durability.

There are seven nodular iron main bearing caps that help ensure the block’s strength under those high combustion pressures, while also enabling accurate location of the rotating assembly. A deep-skirt block design, where the block casting extends below the crankshaft centerline, also contributes to the engine’s stiffness and refinement. It’s complemented by a stiffness-enhancing aluminum lower crankcase extension attached to the main bearing caps.

The rotating assembly consists of a forged steel crankshaft, forged steel connecting rods and hypereutectic aluminum pistons. The alloys in the respective castings for the rods and pistons make them lightweight and durable. Silicon is blended with the aluminum for heat resistance and tolerance within the piston cylinders, which enhances performance and makes the engine quiet.

A thick piston crown — the top of the piston — and reinforced top ring add strength to support the tremendous cylinder pressures enabled by turbocharging and the engine’s high 15.0:1 compression ratio.

Overhead camshafts offer a direct, efficient means of operating the valves, while four valves per cylinder activated by maintenance-free finger followers with hydraulic lash adjusters increase airflow in and out of the engine. This arrangement is integrated on the Duramax 3.0L’s lightweight aluminum cylinder head, which is topped with a lightweight composite cam cover that incorporates the crankcase ventilation and oil separation systems.

A pair of lightweight, assembled camshafts actuates 28.35 mm diameter (1.12-inch) intake and 24.55 mm diameter (0.97-inch) exhaust valves. The camshaft drivetrain is uniquely located at the rear (flywheel side) of the engine, for greater refinement and packaging considerations for the comparatively long inline-six. A crankshaft-driven chain drives the high-pressure direct-injection fuel pump, while a chain driven by the fuel pump drives both intake and exhaust camshafts. A smaller belt drives the variable flow oil pump from the crankshaft.

Low-pressure EGR: The Duramax 3.0L utilizes new low-pressure Exhaust Gas Recirculation to optimize performance and efficiency. The EGR system diverts some of the engine-out exhaust gas and mixes it back into the fresh intake air stream, which is drawn into the cylinder head for combustion. That lowers combustion temperatures and rates.

Traditionally, EGR systems in diesel applications recirculate exhaust gases between the two high-pressure points, the exhaust manifold(s) and intake manifold. However, it generally requires efficiency-robbing assistance from the turbocharger or other supporting elements to achieve the pressure differential required for sufficient EGR flow rates.

The new low-pressure system adds to the high-pressure system, supporting continual adjustment of exhaust backpressure for more efficient operation. It recirculates gases between the low-pressure points in the exhaust system (downstream of the particulate filter) and after the compressor inlet.

When the low-pressure EGR is activated by an electronically controlled valve, the engine burns exhaust gas that has already passed through the particulate filter. That increases the turbocharger’s efficiency, which helps overall vehicle efficiency without deteriorating the rate of particulate matter emitted by the engine.

A variable-pressure oiling system with a continuously variable-displacement vane oil pump enhances efficiency by optimizing oil pressure as a function of engine speed and load. With it, the oil supply is matched to the engine requirements rather than the excessive supply of a conventional, fixed-displacement oil pump. The engine uses low-friction Diesel Dexos 0W20 oil.

Oil jets located in the block are employed for performance and temperature control. They target the inner core of the piston with an extra layer of cooling, friction-reducing oil. The jets reduce piston temperature, allowing the engine to produce more power and enhance long-term durability than engines without the technology.

Active Thermal Management helps the engine warm up quickly to achieve and maintain its optimal engine temperature for performance and efficiency over the entire engine operating range. The system uses a three-actuator rotary valve system to distribute coolant through the engine in a targeted manner. It sends heat where it’s needed to warm up the engine to reduce friction and heat the passenger cabin or cools when needed for high-power operation. The Duramax 3.0L also features split cooling between the block and head.

Common rail direct fuel injection of 2,500 bar (36,250 psi) helps generates class-leading horsepower and torque. The system’s pressure is generated by an engine-driven twin-piston pump sending fuel to solenoid-activated injectors with nine-hole nozzles that support precise metering of the fuel for a smooth idle and lower combustion noise. The fuel system is capable of multiple injections per combustion cycle — up to 10 times per injector — for more consistent and stable combustion performance that translates into smoothness and refinement, particularly at idle.

Stop/start technology helps optimize efficiency in city driving. The driver-selectable system shuts off the engine at stoplights and other stop-and-go situations. The engine automatically restarts when the driver takes their foot off the brake. 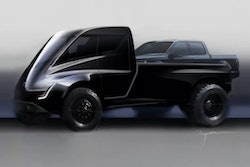 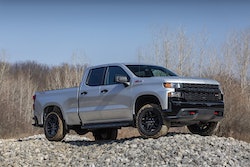 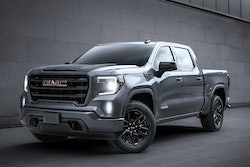