Twenty seconds in, DJI’s most recent promotional video for its Matrice 200 series shows an operator in a hard hat and safety glasses flying a drone outside of a glassy high-rise building set against a brilliant blue sky.

Like most DJI videos, this one provides spectacular footage to highlight the Matrice’s capabilities and specs—the viewer understands this is a serious piece of equipment built for heavy-duty applications—but it doesn’t explain the data that is being gathered on that building. The operator could be obtaining data to inspect HVAC efficiency, to create a 3D model, or to capture footage for a slick commercial real estate video.

Actually, it was an inspection of the building’s metal flashing—those strips of metal that keep the panes of glass secured to the outside of a high rise.

“That building is in downtown Denver,” explained Richard Lopez, virtual design and construction operations manager at Hensel Phelps, the contractor responsible for the building. “By using drones to fly the exterior of the building, we were able to verify that we had the proper quantity and that everything was correct. Traditionally, we’ve had to put a person on a lift, which is not without risk, and send the lift around the perimeter of the building, a time-consuming process.”

A technology enthusiast, Richard worked for nearly two decades in architecture, an industry that tends to be conservative about implementing new technology. He saw the potential for emerging tech to make design and construction processes more efficient, with the most likely opportunities at major contractors. This led him to Hensel Phelps.

“Hensel Phelps isn’t shy about new technology, as long as they are able to prove value in everything that’s being implemented,” he said.

Based in Greeley, Colorado, Hensel Phelps Construction Co. is one of the largest general contractors and construction companies in the United States, with more than 3,000 employees and a diverse range of domestic and international construction projects.

In general, construction and engineering companies have adopted drones at a faster pace, and with more use cases, than most other industries in the U.S. In particular, Hensel Phelps has implemented one of the most comprehensive and sophisticated drone operations that we’ve seen.

This didn’t happen overnight. Like most successful commercial drone operations, Hensel Phelps started out small and scaled over time. But because they came to drones so early, they have benefited from the competitive advantage of early adoption.

As manager of virtual design and construction operations (VDCO) for Hensel Phelps, Richard handles the integrated processes and specs of a project, from engineering and design to scheduling, costs, risk management, visualization, business metrics, and analysis.

“As I learned the ropes, I saw the opportunity to implement UAV technology,” he said.

As with so many companies, the first opportunity came in the form of marketing videos.

“When I started working on the procurement side here, I saw opportunities to get footage of buildings for videos that would highlight all of our projects,” Richard said. “So we paid helicopter pilots, which cost $14-20,000 per flight.”

A year later, the Phantom 2 was on the market, so Hensel Phelps decided to try drone footage for that year’s marketing video.

“This was early on, but we did find a company that would fly a drone for us,” Richard said. “They found everything we were looking for, but they were actually really expensive—there wasn’t a significant cost savings. I thought, there has to be a way to do this.”

At the time, Hensel Phelps had decided not to fly drones on job sites for insurance reasons. Drone regulations were virtually nonexistent, and in order to fly legally, businesses had to undergo a daunting exemption process, which created a significant barrier to entry. Among other things, the FAA required commercial drone operators to have traditional aviation experience, with at least a sport pilot license.

This would have been enough to discourage many managers, but not Richard, who obtained a pilot’s license as a hobby in his spare time. He also began creating risk mitigation plans and learning all about drones so he could make the case to his bosses and legal team. He had a good idea of what they would be most concerned about: a system for managing inventory and logging maintenance, just as Hensel Phelps does with cranes and backhoes, and a way to ensure compliance with the FAA.

Around this time, Richard attended Drone World Expo in San Jose, where he first learned about Skyward.

“I saw right away that Skyward was the perfect solution to present to our legal team,” he said. “I already had a plan in place for documenting inventory and keeping track of everything, including checks and balance, and inventory requirements. I wanted to model our system off manned aircraft. Skyward had the functionality I had been looking for, so I signed up for a personal subscription.”

Once Richard had everything in place, he approached the legal team.

“Skyward was the biggest factor in getting our drone program approved,” he said. “What our attorneys loved was the thoroughness of the software and the ability to document pilots. All of our information is on the web and contained in one database, so all of our district teams, our legal team, and the safety team can access this information whenever they need to.”

“At Hensel Phelps, we really pride ourselves on safety,” he added. “Skyward gives us a way to document everything, know that our machines are properly maintained, and have that extra layer of safety.”

After starting with the single, most obvious use case—marketing videos that previously required a helicopter—Hensel Phelps has scaled up its drone program to not only save money but also to make money and make processes more efficient.

In addition to the metal flashing inspection shown in the Matrice video, Hensel Phelps is also using drones for:

Hensel Phelps is also expanding its drone services to other regions. “My goal is to get Part 107-certified pilots in each of my eight districts,” Richard said, adding that Part 107 has made it much easier to find qualified pilots.

Every company approaches the challenges of scaling differently. The key is to ensure consistently high quality deliverables as well as standard operating procedures that every team follows, no matter where they’re operating. “Our key has been to keep everything consistent. We all use the same DJI airframes and sensors,” Richard said. “Transporting batteries gets expensive, so each district needs to have them onsite. We can take aircraft with us if we fly somewhere but not the batteries.”

Even though Part 107 has lowered the barrier to entry for businesses and drone operators, it has created some additional challenges, especially for companies such as Hensel Phelps that were already running fairly sophisticated operations.

“It’s more difficult to obtain permission to fly in controlled airspace now,” Richard said. “Previously, if I saw that I had a project in controlled airspace, I’d just call air traffic control and work it out with them. Now, we have to go through the waiver process, which can take months.”

Though Hensel Phelps has been successful in receiving approvals to fly in Class D airspace, they have yet to hear back about their first waiver application, which was submitted in August.

Because Hensel Phelps adopted drones so early relative to most companies in the U.S., they have the benefit of hindsight for other companies that are adopting drones now.

Hensel Phelps is a big organization, so we have people who are up to speed on UAVs and watch drone racing on TV, and then we have people who don’t know very much. So we’re working on getting the message out; it takes a while. We have a strong internal educational campaign to spread the message. We also have seminars where we bring in all of our project managers and superintendents from different districts to go over everything in the company. This has been a great forum to talk about our UAV program. We share what we’re doing and how we’re doing it.

Tip #2: Have a safety protocol in place

The construction industry is safety conscious to say the least! In order to sell drones to the higher ups, you have to have a crisis management protocol in place, like you would for any other machine on the job site. If you have that in place, everything else follows smoothly.

Document your pilots, document your aircraft, document your maintenance schedules. Be thorough! Some people think it’s silly, but those are the people I worry about. The way media is these days, if something goes wrong, it’s going to be on the news and hurt the company. Nobody wants to hurt their OSHA rating.

Tip #4: Start with the low-hanging fruit and go from there

We started with marketing videos, which were expensive to produce and required a helicopter. After we mastered that, we have expanded to include more projects and services, which has been important for maximizing our investment in drones.

Editor’s Note: This article was written by Rebecca Wilson of Skyward, a software platform for drone management and collaboration. 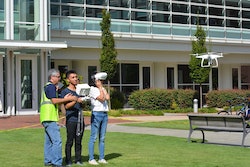 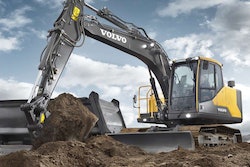 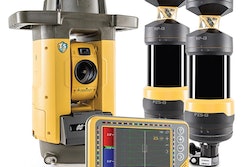