Shops Would Do Well to Focus on Culture When Hiring Young Techs, Votech Officials Say

Hiring the best and the brightest diesel mechanics during a technician shortage can require a change in tactics.

As trade school officials told CCJ, it’s not just about offering a promising paycheck and a few tools to get started, it’s more about the entire compensation package, culture and sometimes even a jet plane.

“We have employers come from all over the United States to recruit our students,” said Jim Mathis, president and CEO of WyoTech in Laramie, Wyoming. “Some employers fly their private jets in and load up students and take them back to their area to show off their shops and wine and dine them.”

Sandra Jordan, director of career services at Lincoln Tech’s Nashville campus, said employers are fishing big time for the best students, which can lead to all-expense paid trips. She recalled a recent conversation with a student who landed a job following an enticing recruiting effort that they won’t soon forget.

“I asked, ‘How did they get you onboarded?’” Jordan said.

What came next was further confirmation of how far some shops are willing to go to attract tech students.

“[The student] said, ‘Well, they paid for me and my significant other to come out to tour their facility. They gave us tickets to the aquarium. They bought us tickets to dinner. They paid for our hotel,'” Jordan said with a laugh. “I said, ‘All right, I don't want to hear anything else.'”

Jordan explained that students are told to seriously consider job offers before accepting “because if it's shiny and looks good, that doesn't necessarily mean it is.”

In addition to rolling out the red carpet, shops can win over students with a tuition reimbursement incentive plan (TRIP), said Robert Kessler, regional vice president of operations at Universal Technical Institute and president of UTI’s campus in Exton, Pennsylvania.

“I would tell you that it's not necessarily just the pay, but the whole compensation package,” Kessler said. “Many of the employers today offer some form of TRIP. They're offering to pay back students' loans over the course of time, and that is certainly a very attractive piece of the compensation package. In other cases, it might be relocation assistance or tool allowances, different things like that.” 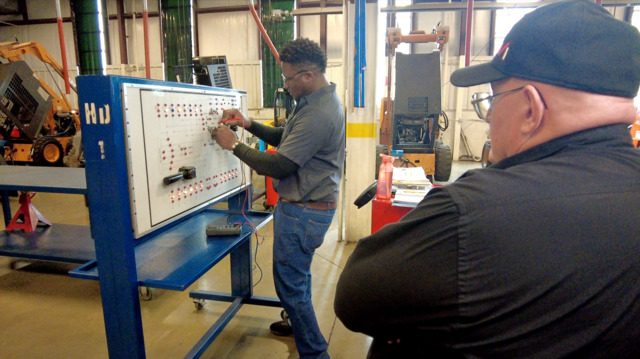 "I think you have to have a very special person to be a mentor," said NVI’s director of career services Hal Wagner. "They have to be obviously skilled and educated enough to pass on the right techniques. And they have to be patient and understanding, and you don't always find that in a senior tech in a lot of shops."NVIWhen it comes to benefits, 83% of respondents to the 2022 State of Diesel Technicians report, a survey-based report produced by Randall Reilly and sponsored by Shell Lubricant Solutions, said they receive health insurance; 78% get paid holiday leave; 72% dental insurance; 69% are offered an IRA or 401(k); 64% vision insurance; 60% uniform/PPE allowance; 58% life/accident/death and dismemberment insurance; 57% paid sick leave; 20% tool program reimbursement; 17% tuition reimbursement; 15% pension plan; and 14% profit sharing.

Pay is not everything. Given the number of jobs available to students, they have an opportunity to be more particular about who they go to work for. Though a paycheck ranks high on the list of priorities, it’s not always the top concern.

Adam Duplin, diesel program coordinator at New Village Institute (NVI) in Blairsville, Pennsylvania, said shops would do well to focus more on their relationship skills with students who may just as well jump ship if they sense better opportunities elsewhere.

“More so with this younger generation of students, we're finding that they’re looking into mentoring or an open relationship with the employer to know that they're going to take care of them and help guide them and progress them the right way,” Duplin said.

Current training methods in shops vary. According to the 2022 State of Diesel Technicians report, 50% of respondents are sent to training events and/or receive instruction from trainers brought on-site; 40% receive training through OEM/supplier courses online; 37% are taught through companywide training curriculum; 28% are encouraged to seek out their own training; and 11% said they have not undergone training in their current role.

NVI campus director Chris Barton pointed out that laying out a plan for students can help ease the frequently awkward question of pay.

“I think being able to lay out a growth plan can help ease some of that pay issue,” Barton said. “Yes, they do care what they're making right off the bat, but I think in some cases they're willing to take maybe a little less, as long as they can see that there is a clear progression and they know how they can make more money in the future as they develop their skills or get certifications.”

Jordan said students may be willing to take a cut in pay if someone shows them the big picture of the entire compensation package.

“We spend a lot of time in our department and career services trying to educate students because some will come to us and say, ‘Well, I'm not getting tuition,’ and I'll say, ‘But they're paying you $32 an hour, so that's the equivalent of someone paying you $20 an hour plus tuition.’ So we have to sit down and show them the map and work it all out for them to understand.”

Get your culture known quickly

With smartphones in hand, NVI’s Director of Career Services Hal Wagner explained that students are researching shops not only for compensation packages but also for culture. If online feedback isn’t positive enough, students may look elsewhere no matter the pay. 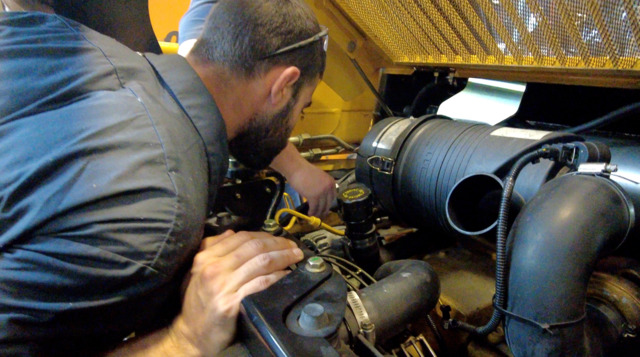 The 2022 State of Diesel Technicians survey-based report produced by Randall Reilly and sponsored by Shell Lubricant Solutions shows that 56% of respondents believe pay and benefits rank as the most important factor when choosing a new job while 11% say location; 3% career advancement; 3% scope of work; 7% corporate culture; 4% type of equipment to be worked on; 2% continuing education; 5% size of company; and 10% ability to use the latest technologies.NVIAfter doing their research, word of mouth travels fast and plays a big roll, Wagner said, in influencing job selection, something the State of Diesel Technician report backs up with most respondents (67%) leaning on word of mouth for job leads.

“That's a huge part that factors in where pay leaves off. It’s the culture and being comfortable with where you work,” Wagner continued.

Mathis explained that students at WyoTech are taught to consider workplace culture instead of chasing a paycheck.

“I think as much as anything is how are these students going to be treated? What's the culture of the shop?” Mathis said. “And I guess that's where my first bullet point is. Culture is everything in an organization, and so we really teach our students to make sure that you just don't go off pay or benefits, understand their culture, understand their expectations, make sure that your culture matches with their culture because if it's not, I don't care how much you get paid, it can be very miserable.”

The importance of culture to the incoming crop of would-be technicians could mean a change in management philosophies at the fleet level, as respondents to the 2022 State of Diesel Technicians survey – about 51% of which have 21 or more years in the business – ranked corporate culture fifth among factors most important when choosing a new job, behind pay, location, opportunities for advancement and scope of work.

Simply offering up a positive culture is not enough. Jordan said it’s the shops that quickly make themselves known to students and tactfully pursue them at career fairs that are typically reeling in most of the students.

“We have people thinking totally outside the box with their recruiting strategies,” Jordan said. “I'll give you an example. I won't use company names, but at the career fair, the people who hired and got the most out of the career fair were people who made offers and interviewed the students on the spot. Other people said, ‘Hey, sign up for interviews. We're going to be here tomorrow.’ But students can’t wait for tomorrow. They’re gone. They were gone.”