Bobcat and Doosan heavy up

High-reach skid steers, a slew of Bobcat and Doosan new excavators and a pair of wheel loaders are coming to a dealer near you.

Recession or no, the engineers at Bobcat and its parent company South Korea-based Doosan Infracore Construction Equipment have been hard at work developing a broad range of new machines – much of it setting new records in size and capacity.

At a press event in Atlanta, Bobcat unveiled a new skid steer and tracked loader (their biggest yet), four new compact excavators, beefier utility vehicles and a handful of technology upgrades that will cover much of its full line of earthmovers. In addition, Doosan showed a trio of excavators and two new wheel loaders.

Doosan bought Bobcat from Ingersoll Rand back in 2007 and Moxy articulated trucks in 2008, however the companies are maintaining separate brands and distribution channels. There may be long-term opportunities for both Bobcat and Doosan dealers to take on additional heavy or compact equipment lines, says Laura Ness Owens, Bobcat public relations manager, but only where local market conditions are favorable.

Bobcat’s deluxe instrumentation and selectable joystick controls are available as options on the new loaders. The joystick is mounted so that it moves up and down with the motion of the seat to reduce operator fatigue. It can be slid forward or backward to the most comfortable position. The control buttons on the joystick enable you to set engine speed, travel direction and ISO or H-pattern controls. The selectable joystick option will also be available for Bobcat S100 and T110 loaders.

The deluxe panel also integrates with some attachments. With laser guided box blades, for example, it communicates transmitter, receiver and blade position to the operator, enabling him to make minor grade adjustments without leaving the cab. With a tree spade you can monitor active blades and gates and change auto-dig and easy-dig settings. It also helps keep track of your work – counting the number of trees dug in a day and recording the number of hours put in on an attachment. A keyless start with up to eight customizable security codes eliminates theft and lost-key hassles (or excuses). Warning and service code histories offer detailed information for more accurate service and repair activities.

The new excavators have numerous features in common with the company’s M-Series units, including auto idle, fingertip boom swing control, integrated slew brake with infinite braking positions, load sensing/closed center hydraulics, and an X-frame undercarriage that boosts clearance and sheds debris. The new diggers were also designed so the swing castings and cylinders remain within the footprint of the tracks when digging in the offset position so you can position the machine tight against a building, wall or obstacle.

Operator stations are offered in a TOPS/ROPS design or enclosed with improved air conditioning and heat and a cloth seat option. The E42 is a conventional tail swing design, the E45 boasts true zero tail swing and the E50 is what Bobcat calls “minimal” tail swing, with just an inch of overhang. The remaining differences between these three excavators are mostly in the specs, detailed below.

Excavators 1.5 metric ton: In the bantam-weight arena, Bobcat also fielded a 1.5-metric-ton excavator, the new 324 with a 13.9-horsepower engine and load sensing hydraulics. A redesigned workgroup gives it 8 feet, 6 inches of dig depth and a dump height clearance of 8 feet 8 inches. A retractable undercarriage hydraulically shrinks to just 38.6 inches to get through gates and doorways, and then expands out to 53.7 inches for stability when digging. Self-storing blade extensions stretch the dozer blade out to 54 inches.

As for specs, the 324 weighs 3,428 pounds and offers 1,778 foot-pounds of arm breakout force and 3,620 foot pounds of bucket breakout force. Tailswing over the side measures 15.3 inches. An enclosed cab with heat is optional.

Utility vehicles: For a look at Bobcat’s new lineup of four utility vehicles check out the digital version of our sister publication Total Landscape Care at: www.totallandscapecare.net.

For those of you who run heavier equipment, Doosan showed a pair of new wheel loaders and three excavators. GPS telematics systems are now standard on all these machines, along with a free one-year subscription to the service.

Excavators: The two smaller excavators are sized for the heavy-highway segment of the market, both in capacity and footprint. The 14-metric-ton “reduced tail swing” DX140LCR has a tail swing radius of just 4 feet 10 inches. The 24-metric-ton, “near zero” swing DX235LCR has a tail swing radius of 5 feet 6 inches and overhangs the track shoes by a miniscule 3.75 inches. Without large overhanging counter weights, the risk of accidents or damage is reduced when using these excavators around on roadways, railroads or near buildings, bridges, walls, abutments and congested sites. On some highway jobs this means having to shut down fewer lanes of traffic.

Topping out the weight charts on Doosan’s newest excavator offerings, the DX350LC weighs 77,603 pounds and tears into its work with a 1.95-cubic-yard bucket and 54,012 pounds of breakout force on the standard arm. It reaches 36 feet high and digs to a depth of 24 feet 2 inches. For craning and pipe moving chores it has a lift capacity over the front at a 20-foot radius of 27,540 pounds.

The 271-horsepower engine for the DX350LC offers an electronic power optimizing system (called e-POS), which links the engine and hydraulic systems for increased fuel efficiency and self diagnosis to quickly resolve technical problems. Polymer shims on the bucket pivot extend pin and bushing life. Air conditioning and heat are standard. And an air suspension seat with a seat warmer is optional.

Doosan added mass and strength to their excavators’ workgroups. The pin and bushing points on all of them are cast iron for durability and rigidity. Grease points were designed to be reached from ground level – no need to get a ladder to grease the machine. And all the electrical lines are labeled, eliminating tedious troubleshooting. For those of you who hate to slow down for maintenance, engine service intervals have been extended to 500 hours.

Wheel loaders: Designed primarily to fit the needs of the municipal, government markets the new DL220 wheel loader carries 2.9 cubic yards in its bucket and can dump at heights of up to 9 feet 4 inches with a dump reach out to 3 feet 6 inches. The bucket attacks the pile with up to 22,928 pounds of breakout force. A 148-horsepower engine drives the unit with a full powershift transmission providing four forward speeds (up to 23 mph) and three in reverse (up to 16 mph). The tranny also offers manual, automatic and semi-automatic modes with a kickdown first gear. Measured off the bucket edge, the turning radius cuts a circle 19 feet 2 inches at the maximum steering angle of 40 degrees.

The new Doosan DL420 wheel loader replaces the Model DL400 with a more powerful, 280-horsepower engine that generates a mountain-moving 1,070 pound-feet of torque. A Z-bar lifting system gives the 5.2-cubic-yard bucket 47,210 pounds of breakout force for greater productivity when working with hard or dense material. The DL420 can reach maximum forward speed (23.6 mph) and tops out at 11.4 mph in reverse.

Static tipping load is 39,432 pounds. The bucket pivot point at max reach measures 14.3 inches. With a pin-on bucket, and bolt-on cutting edge tipped forward at 45 degrees you can dump with this machine up to 10 feet 2 inches and reach out 4 feet 2 inches.

The articulation joint on both loaders was beefed up with a double roller bearing to eliminate flex. All the panels and doors are metal, rather than plastic, for durability and rigidity. Four-point rubber mounts on the cooling group reduce vibration and noise and a hydraulically actuated reversible cooling fan conserves fuel and purges itself of debris. All the major electrical components are housed within the air conditioned cab to keep them away from engine heat and prolong their life. EW 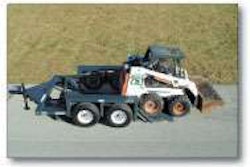 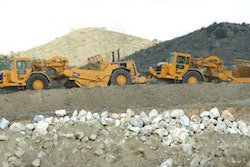 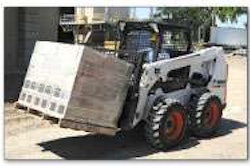