Of all the machines that move earth, nothing can pick it up and put it down as fast and in such large volumes as the self-propelled scraper. And while they’re not suitable for all soils, budgets, jobs or contractors, for the contractors who do use them scrapers are a way of life.

Carrying 22 cubic yards and going 32 miles per hour, a scraper like this can make you a lot of money, or make you broke, in a hurry.

The key to making profits with scrapers, perhaps more than any other earthmoving machine or technique, is knowing your numbers. There’s almost an inverse relationship between the huge volumes of earth being moved and small dollars-and-cents details you must master. If you short-change yourself by as little as a few cents per cubic yard – on a machine that can move 22 cubic yards in every three-minute cycle – you’ll go broke in a hurry.

The scope of this article does not allow us to figure those numbers that closely. We’re looking at machine costs only. To come up with your own pricing guidelines you have to include production rates and things like soil conditions, local wages and your own maintenance costs. The size of the job, steepness of the terrain and the amount of support equipment will also factor in. What we can show you, however, is a theoretical snapshot of the owning and operating costs of a single scraper, and you can use this information as a starting point to build your own models.

Gerhold recommended we study the Cat 627G twin engine scraper as it’s the company’s best selling model and can be used in a multitude of applications from general and heavy construction to smaller mining operations. We also narrowed it down to an open bowl design and a push-pull set up.

The first step in knowing your costs is to understand where the sweet spot is for scraper applications. A scraper can be economical over a range of distances, Gerhold says, anything from 500 to 5,000 feet of haul distance for the 627G. Shorter than that is best left to dozers. Longer hauls are usually handled with excavator-loaded articulated trucks. Bigger scrapers, however, such as Cat’s 657 are frequently used in hauls up to 8,000 feet, especially in California, which is the region in the country where scrapers predominate, or as Gerhold calls it, “scraper heaven.”

In the middle of that range – 2,500 to 3,000 feet – there are a lot of haul systems to compete with scrapers. And you have to calculate your O&O costs on those as well to make sure the scraper is the most cost effective method. Just remember that all the other systems use at least three, sometimes four pieces of equipment – a loading machine, a carrying/dumping machine, a spreading machine and if necessary, a compacting machine.

The self-propelled scraper, by contrast is one machine, self loading and self spreading, except when a dozer is used to help push a scraper through a cut. If they’re handled right, the tires on a wheeled scraper can achieve up to 90 percent compaction by staggering the wheel tracks during the fill.

Dozer assist or not?

Push dozers are sometimes used to assist single engine scrapers, Gerhold says. “If you’re in rocky or abrasive material, the scrapers run just enough rpms to keep the pumps alive and the dozer does the hard work of loading the machine. That way you don’t get any tire cutting issues.” If you have two skilled operators you can use a pair of scrapers in a push-pull operation without a dozer. But with less skilled operators it’s usually best to let the dozer do the pushing and act like the cut boss, he says. 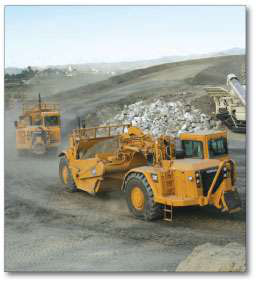 Management of the jobsite is crucial to making the most of your scraper dollars.

The dozer will add to your cost per ton or yard, but this should be compared to the costs of three or four machines used in other methods, Gerhold says. “People get so wound up on fuel burn. A 627 may burn 16 to 18 gallons per hour and an articulated truck just 6 gallons per hour, but fuel is just one part of the O&O costs. You have to look at all the costs divided by the rate of production and that gives you the cost per banked cubic yard.”

The other variable is jobsite management. With machines moving big volumes this fast (the 627G tops out at around 32 mph), every machine has to be orchestrated. “If you don’t have a game plan it looks like a three ring circus,” Gerhold says. “Customers who know how to use scrapers and know how to make money with them are usually on top of it. When it’s done right, it’s like poetry in motion.”

Getting into scrapers requires a commitment, Gerhold says. You’re not going to buy a fleet, try them for a few years and sell them. The cost and design of scrapers rewards long-term ownership. Many scraper contractors keep their machines for more than a decade, rebuilding engines and components as needed, and Gerhold says it’s not uncommon to see rebuilt scrapers working today with more than 20,000 hours on them. If you’re thinking of getting into scrapers but are not ready for such a big financial commitment, Gerhold says you can learn a lot by renting a scraper-based hauling system to see how it works for you.

In a sense, scrapers are an old-school application that can still hold their own today – if you can master the jobsite management skills and the production and O&O cost calculations.

“That message has been kind of lost over the years,” Gerhold says. The older guys in the 1960s and ‘70s, the ones who built the Interstate system, knew how to manage jobsites with scrapers. Scrapers were the kings of moving earth back then. Today, we’re just a player on that team. But we still have a spot.” EW 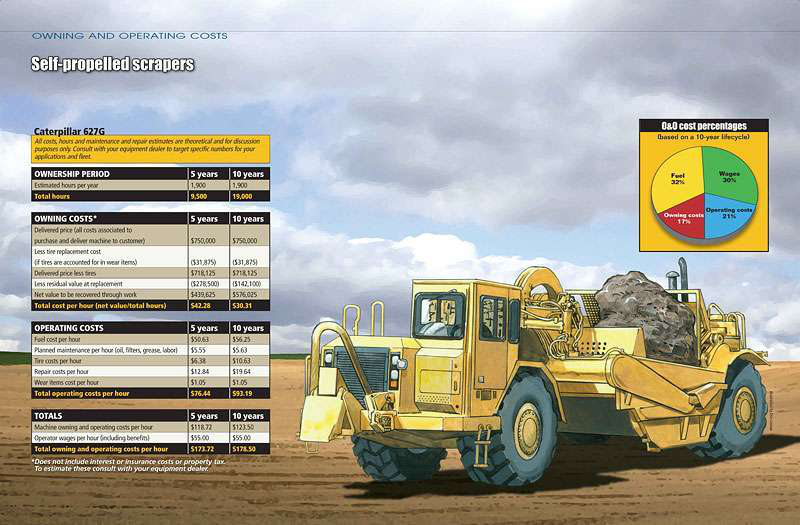