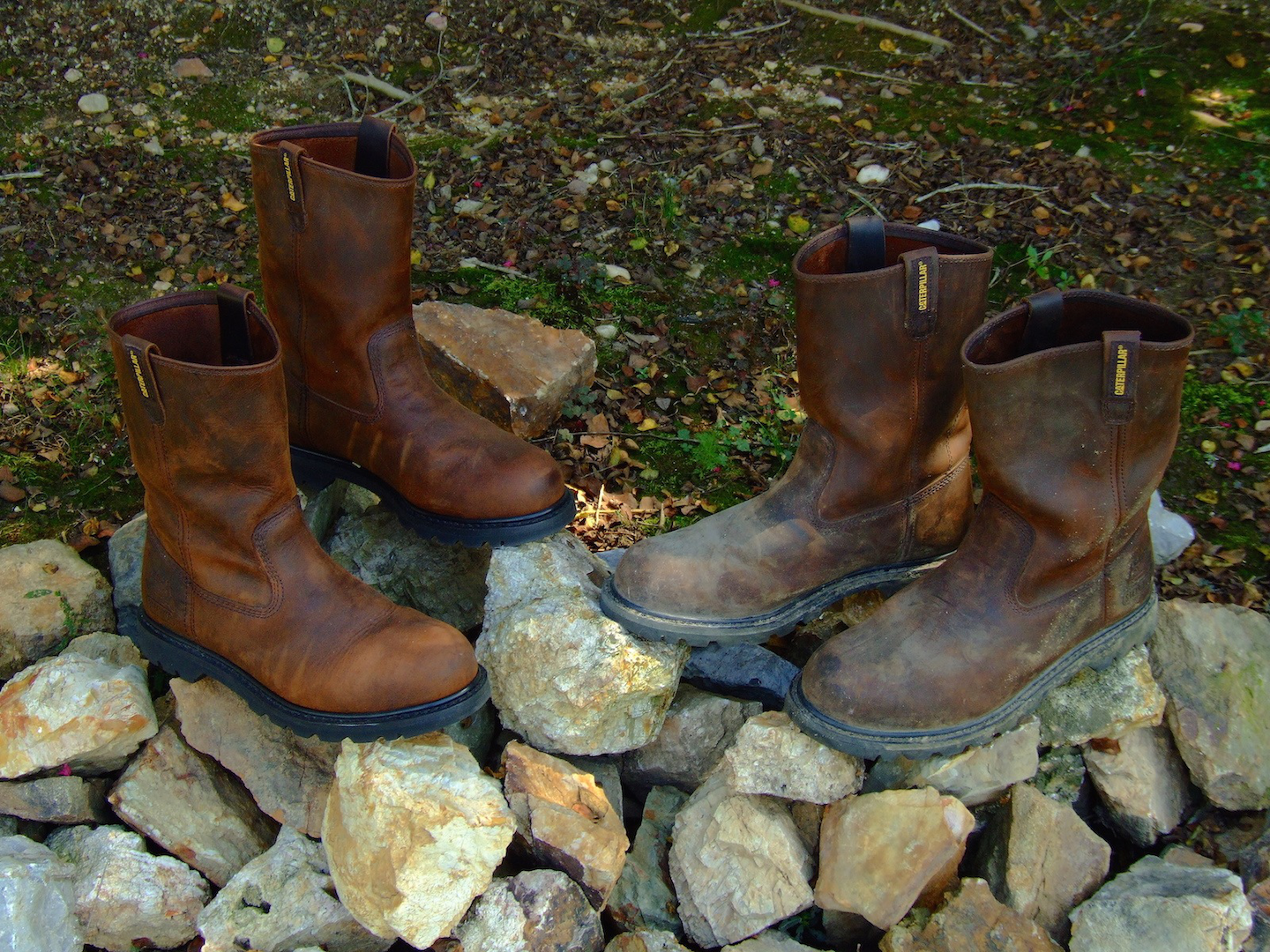 For several weeks I tried a unique review process on a pair of Caterpillar Revolver steel-toe pull-on boots—I wore one pair while my 16-year-old son wore another.

During this time I jokingly referred to the process as the foreman and crew member test, mainly because my son really wanted to put the boots through the ringer as part of his testing, while I planned something a bit more moderate.

He took it seriously (the boots he wore are on the right in the above photo). His career goal is to work in forestry, so he took the mindset of conditions he thought he would face in such an environment. Occasionally he volunteers helping to clear brush from hiking trials in local private parks, so he thought one of these events to be a good test environment.

I, on the other hand, tried them out around the office, during my approximately 3-hour daily commute drive (perhaps simulating extended periods of time in heavy machine or truck cab), while performing some gardening work, DIY projects and in my woodworking shop.

I know many people like to get a pull-on boot that is a half-size or full size larger than what they normally wear. That would be a mistake with the Revolver. My son and I are a half-size apart and wore our respective normal sizes. The fit was spot on for me, even at the boot opening, despite my large calves. Even with a slightly narrow foot, my son’s boot was within his “tolerance” range, as he described it.

New pull-on boots are a bear to break in typically, but these seemed slightly less rough on the typical pain points. We both felt the bend at the ankles for the first couple of days, but that was to be expected. Because the fit was good, we didn’t notice any exceptional rubbing beyond the ankles.

The Revolver feels like a lightweight tank, with nice, thick leather that is just the right stiffness. The leather on a similar pair of boots I own, which my son often borrows, isn’t as thick and feels flimsy compared to the Cat boot. I was happy to get a pull-on with a more aggressive tread than my old pair, which is what I got with the Revolver. Despite it’s sturdiness, this boot also seems to be lighter than comparable boots out there.

My son’s “a couple of miles at a time” walking after the initial break-in phase caused no problems with blistering or heavy wear areas on his fee or ankles. We both recommend heavy and high socks, however, in such a setting.

He put the Revolver through a wide variety of conditions while clearing a trail, standing on uneven hard surfaces (a boulder), standing in wet mud that covered the toe, walking up and down wet slopes and on steep grades with loose materials. None of these conditions presented a problem for him. His feet remained dry in the wet mud and he had better footing in these conditions than any other boot he’s worn.

What surprised him was how well the leather held up, with minimal scratching appearances and no gouges that we’ve experienced on the old pair we shared.

For me, experiences were similar. I had no issues in the extending driving conditions, in which I’ve experienced some problems around my ankles with my other pull-ons. And honestly, if I didn’t know better, I wouldn’t think I was wearing a steel-toe boot. Wearing them in the gardening situation worked well, even in squatting positions.

But, as I’ve experienced with other pull-on and lace boots in a stationary setting in my workshop, where I might not move from one spot on hard concrete for lengthy periods, did cause me a little trouble with feet and knee ache. As long as I’m moving consistently, though, my feet remained comfortable.

Longer-term testing will certainly provide a better glance of the comfort and capabilities of these boots, but for now the Revolver has become the go-to boot for both of us.