The U.S. Army deploys a lot of ground-based vehicles. If you don’t believe us, just take a look at this list. Unsurprisingly, a lot of those are trucks. The Army has a lot of supplies and people to move around and less-than-hospitable conditions to do so in.

Most of the Army’s trucks are big, hulking machines capable of shredding off-road terrain with ease. And many of them are capable of taking the direct blast of an IED. But the problem with the combination of big and armored is that it can be less than maneuverable. But what if you could give the same amount of protection in the body of a mid-size pickup truck?

That’s what Battelle, a non-profit research and development group based out of Columbus, Ohio, says it can do. And the U.S. Army is interested. Recently, Battelle’s Tactical Systems team announced that it has entered into a contract with the Army to provide up to 270 of these armored pickup trucks.

According to Battelle, the company will be modifying and armoring existing pickups rather than building new ones. The company won’t say just what brand of truck they are modifying, (the photo you see above is of a Battelle demonstration vehicle) but Fox News reports that it’s a brand “as popular overseas as the F-150 is in the United States.”

To armor the trucks, Battlelle installs Dyneema and bulletproof glass made from sapphire grown in a lab. Dyneema is an extremely strong fiber installed in sheets that is particularly good at stopping bullets. Communications systems are installed in the trucks as well.

Battelle has a lot of experience with both armoring vehicles and working with the Army. For several years, the company has armored HUMVEEs for the Army.

In the end, all the added protection just about doubles the weight of the vehicle which requires Battlelle to upgrade the engine, strengthen the 4×4 system and reengineer the trucks’ suspension.

We can’t wait to see the final product. 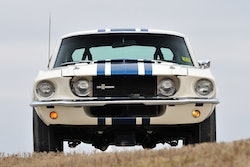 GEAR: This 1967 Shelby GT500 Super Snake is the most expensive Mustang ever 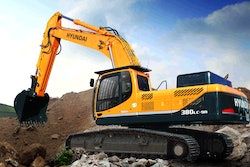 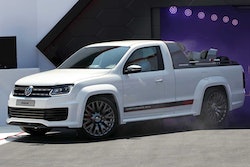