Volvo Construction Equipment and Lego have quite a unique partnership among the heavy equipment and toy makers of the world.

As Lego has released sets of its popular building blocks based on Volvo machines over the years, the toy company’s designers have enjoyed unfiltered access to Volvo’s engineers and designers in order to make those sets as highly detailed as possible.

And because the relationship has been so beneficial for both sides, Volvo last year asked Lego to participate in a design exercise with the hopes of creating a concept machine that would hopefully result in real world solutions. The result of that exercise was the Volvo ZEUX, a Lego Technic set that lets you build an autonomous wheel loader with a camera boom that resembles a scorpion tail. Volvo says the work on ZEUX “led to a number of potentially revolutionary patents.”

Inspired by that collaboration, and the focus group of kids that helped out with it, Lego and Volvo asked Lego hobbyists around the world to come up with their own designs. Entries came from builders ages 14 to 47 all around the world. A panel of judges representing Lego and Volvo CE chose winners based on the coolness and originality, inspired details, and best use of Lego elements.

The two companies then picked their top 10 favorite designs and created an collection that briefly ran as an exhibit in the London Transport Museum earlier this month.

“We were overwhelmed with just how far people went with their creations. The best-in-show were picked because they prove that the boundaries of our future construction machines are seemingly limitless,” says Volvo’s head of Brand Communications and Partnerships, Arvid Rinaldo. “Some of these designs look like they have come straight out of a sci-fi movie. We are at an exciting point in time for the industry and these models are actually not too far removed from what could be coming to our construction sites of the future.”

The grand prize winner of the contest was 27-year-old Vida András of Transylvania, Romania. Dubbed the Rottweiler, András’ machine is fully autonomous and is outfitted with a pneumatic drill, a dozer and a 3D printer. Pictured at the top of this post, Volvo says the Rottweiler is capable of “taking on any construction challenge in the most hard-to-reach places.”

Based on András’ video rendering of the Rottweiler in action, the main design element of the machine is its boom and attachments. András dreamed up a machine that can quickly switch between demolition and earthmoving attachments before equipping a 3D printer to build concrete structures. If the video below doesn’t play, click here to view it on YouTube.

“To me, the design is not just about playability, it’s about really exploring the potential for future technologies. In my industry, 3D printing is one of the biggest trends at the moment, so I wanted to incorporate that into my model,” András says. “I have 20 years’ experience playing with LEGO sets. I’ve loved it forever and have always had this confidence that I could sit down and build for hours and eventually it would all come together in the end.”

Two runners-up were also chosen including the Volvo ICARUS, “a mobile solar power plant with advanced off-road capabilities,” (pictured above) and what looks like a flying excavator called the Volvo Excavadrone “built to operate on land and in the air (below).” 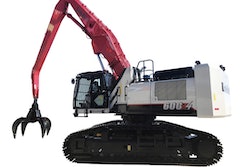 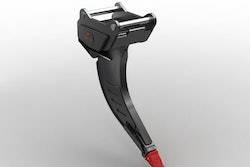 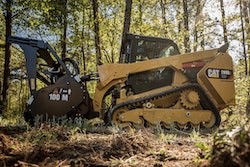