Cat’s Grade Control 3D has now migrated to the smaller dozers in its lineup, the D3K2, D4K2 and D5K2. “This system is now the same from the D3 to the D8 size,” says Joel Fritts, market professional, small track type tractors, Caterpillar.

The system automates machine functions during both production dozing and fine grading applications, and uses dual, roof-mounted antennas that eliminate the need to climb on the blade to remove both blade-mounted masts and cables at the end of the day. “All the components remain on the machine, so there’s no need to worry about taking them off,” Fritts says.

The in-cab display shows the grade plan, cut/fill data and grading indicators, all information that can improve productivity by up to 50 percent compared with conventional grading methods, according to Cat.

With little need for staking or manual grade checking, the operator can stay in the cab and work unassisted to move material to grade. Cat says the system’s automated blade control reduces operator input by as much as 80 percent.

There are also three intelligent operating features that allow the machine to match blade loads with ground conditions:

An AccuGrade Ready option is part of the package and allows the use of other Cat technologies, such as AccuGrade Laser or a universal total station in situations where there’s limited satellite reception. 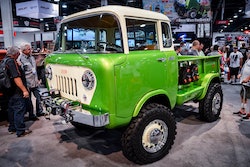 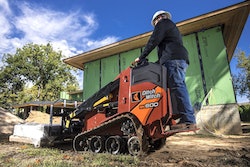 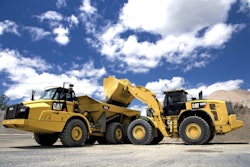