Every once in a while, the release of a new product coincides perfectly with a point in time where the industry it serves most needs the killer feature it delivers.

In this case, that product is Komatsu’s new D61i-23 dozer, a machine that features what the company calls “intelligent machine control” implemented in such a way that it delivers automatic control throughout the entire job—from rough dozing all the way through to finish grading.

Komatsu says the machine’s ease of use not only allows the most inexperienced of operators to get working more quickly, but it also increases the productivity of the most experienced operators by about 13 percent.

And what’s big here is that the D61i-23 is being released at a time where the U.S. construction industry can’t seem to find enough skilled machine operators to meet demand from a reinvigorated housing market.

“I kind of feel like Steve Jobs must have felt when he introduced the iPhone because I feel that’s where we’ve moved this technology to,” Robson says. The 15-year Komatsu veteran calls the new dozer “the most exciting project I’ve been on since I started at Komatsu.”

“The current customer feedback from this product has been outstanding,” Robson says.

Robson says the “i” that differentiates the new model numbers from say the D61-23 stands for “intelligence” because, unlike conventional aftermarket machine control options from third parties, the D61i-23 offers fully automated machine control.

Robson says that aftermarket machine control solutions only control the machine at the very end, during the surface finish phase of the work. So even with the added technology, the operator must still perform the vast majority of the work manually.

But the D61i-23 can be operated in automatic mode from top to bottom of the job. “It’s so intelligent that when this machine is dozing along and it realizes that there’s too much load on the blade that the tracks would slip and some damage might occur to the ground or undercarriage, it won’t let that happen,” Robson says. “It says I’m going to try to keep moving forward without tearing up the ground or damaging the undercarriage…That was left to operator experience in the past.”

In order for the D61i-23 to produce as accurate a finish grade as possible, Komatsu implemented an enhanced Inertial Measuring Unit (IMU+) along with stroke-sensing hydraulic cylinders. The IMU+ does away with the need for blade-mounted sensors and the stroke-sensing cylinders allow the system to know the angle of the blade.

In the end it amounts not only to easier operation but a big savings in time. Furthering the “intelligence” moniker attached to the D61i-23 is the fact the machine can transmit real time location and grade progress data wirelessly to the office through Komatsu’s Komtrax tracking technology and Topcon’s construction management system Sitelink3D.

Thanks to that connectivity, staking the ground is no longer needed as that information is wirelessly transmitted from the office to the D61i-23. From there, intelligent machine control can be engaged and actually raises and lowers the blade as the dozer moves forward according to the plans developed in the office. Meanwhile, the GNSS antenna located on the roof of the machine transmits location and grade data back to the office where a real time 3D map is created by Sitelink.

To see it all in action is impressive to say the least and it makes you wonder how much longer until all of these machines are being driven not from the cab, but entirely from the office computers.

But we’re still a few years away from true robot dozers roaming the jobsite autonomously and Robson says that intelligent machine control in no way removes the value of having an experienced operator. Robson says that experienced operators are becoming “multi-taskers” that are becoming more and more proficient with BIM and design software and the planning stages that allow machine control to do its job on the site.

“More and more, finesse is the part where the help comes,” Robson says.

But having all of this technology on board wasn’t enough for Komatsu, which is where a second “i” comes in: integrated. Rather than produce another plug-and-play dozer that would accept machine control devices from Topcon or Trimble after purchase, Komatsu strove to build each element of the system into the machine body.

“The only giveaway is the antenna on top of the cab,” Robson says.

When designing the D61i-23 Komatsu engineers set out to figure out a way to avoid what is currently the norm: mounting costly components to the dozer blade, an extremely vulnerable part of the machine. “Every little bump is magnified because the blade is so far out,” says Komatsu engineer Jason Anetsberger.

Anetsberger noted that the position of the GNSS antenna also makes it prone to getting snagged on trees or being stolen. So engineers spent a huge chunk of the three to four years spent designing the D61i-23 getting all the components into the body of the machine. The result is a small GNSS antenna mounted on the roof and not a single cable between the machine and the blade.

Much of the difficulty in achieving this design was figuring out a way to move the antenna to the roof and retain the optimal accuracy third-party antennas get when mounted to the blade. In the end, Robson said the engineers were able to do just that.

In terms of the end result, operating the D61i-23 is rather simple—even for those who haven’t operated a piece of equipment in their life. Automatic grading is engaged with a press of a button and the blade is lowered automatically into its position with a flick of the blade joystick.

On a large display inside the cab, the dozer’s performance is compared to the preset grade with an easy to read gauge that resembles a level and indicates whether or not you’re on target. If the arrow is in the middle green area, you’re doing well. But if it ventures up into the red area it’s too high and if it goes down into the blue, you’re too low. Those colors are also used to indicate grade progress on the real time Sitelink 3D map in the office.

In the end, the D61i-23 can actually be operated completely hands-free, that is until you need to change direction.

And for those worried that the machine provides too much automation or are hesitant to trust the machine’s automatic control, Robson said he’s confident that any operator that gives it a shot will be convinced.

“They’ve got to begin to realize, let the machine take care of itself,” he says. “Try it this way, use it this way and you’ll start to realize that changing my habit a little bit, I can run in auto a lot more than I used to.” 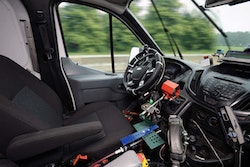 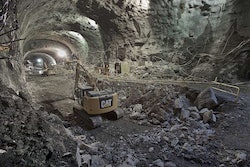 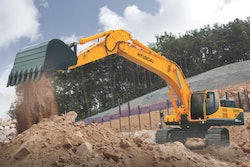