John Deere has expanded its lineup of large wheel loaders with introduction of the all-new 744, 824 and 844 P-tier model under its Performance Tiering Strategy.

In conjunction with the 904 P-tier that was unveiled at World of Asphalt earlier this year, Deere says, this series of loaders offers advanced features that make them ideal machines for contractors looking to tackle even the toughest jobs.

”Building upon the improvements introduced on the L-series loaders in 2019, the P-tier models incorporate even more technology advancements, providing our customers with a line of dependable and strong wheel loaders to meet the demands of the aggregates industry,” said Luke Gribble, John Deere solutions marketing manager.

“Whether the machines are working at the face or loading trucks, John Deere customers can be confident that the P-tier machines will provide exceptional performance all day – even in the most rugged applications,” Gribble said.

All four P-tier wheel loader models (744 P-tier, 824 P-tier, 844 P-tier, and the 904 P-tier) include new technology options. Some of these new optional technologies include the Advanced Vision System and an Advanced Obstacle Detection System for improved visibility and increased situational awareness.

The technology includes new higher resolution digital cameras mounted on the two sideview mirrors. The side camera views are combined with the standard rearview camera to create a single, larger dedicated display. This feature also overlays a projected vehicle reversible path, like those on cars when traveling in reverse, within the same dedicated monitor. In conjunction, escalating audible alerts inform operators when obstacles are in the path of their machine.

A redesigned cab in the four large wheel loaders gives operators more space, storage and visibility. The door has increased by 79% over the previous series of machines at the bottom opening for easier entrance and exit. Additional features include adjustable heated and ventilated seats and an upgraded HVAC system.

Electrohydraulic controls with multifunction programmable buttons allow for customized machine operation. Operators can adjust settings based on preference to increase productivity across a range of jobsite applications. In addition, the company says material-handling buckets with integrated spill guards and curved side cutters make for easier and more intuitive operation.

Base models of all large P-tier wheel loaders include a variety of features aimed at increasing performance. Deere gave each model high-capacity, heavy-duty axles, with an added standard axle cooling filtration for more durability in rugged conditions. The company says to improve machine performance while heading into piles, the loaders include a standard lockup torque converter that adds torque and increases shift quality.

The P-tier wheel loaders also come with more horsepower, breakout force and hydraulic pressure than past models. Deere says both the 744 and 824 increased by 3%. Also, the 844 P-tier went up 9% in horsepower while burning 2% to 9% less fuel, and the 904 is up 7% in horsepower and burns 3% to 7% less than its predecessor.

In addition, the 744 and 824 feature ground-level servicing, including a remote engine oil dipstick and improved electrical and hydraulic routing. 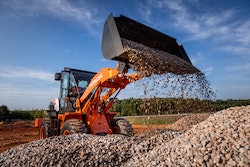 Loaded with Tech: Wheel Loaders Advance in Most Every Way 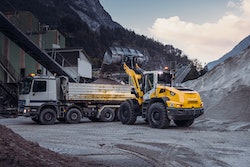