Hyundai Construction Equipment will use its ConExpo display at Booth W42501 in the West Hall to showcase new, current and future model machines – including the company’s re-entry into the compact track and skid steer loader markets.

“Hyundai brings to ConExpo-Con/Agg our strongest and deepest lineup of products, along with exciting, alternative-powered working prototypes and some of the industry’s top safety and support systems, plus our team of sales, support and product experts,” said Stan Park, president, Hyundai Construction Equipment Americas. “This also marks our first ConExpo-Con/Agg since the recent Hyundai acquisition of Doosan Infracore, now known as Develon. Visitors will see some of the promising, early results of our collaborative efforts, including one of our new articulated dump truck models.”

(You can see more of what OEMs have in store for ConExpo 2023 on our show preview page by clicking here.)

At the show, Hyundai will take the wraps off its newly available model HS120V skid steer loader and HT100V compact track loader.

Three new compact excavator models will also make their debut at the show – the HX35AZ, HX40A and HX48AZ.

The HX40A and HX48AZ will also feature adjustable auxiliary flow. The HX35AZ and HX48AZ are zero-tail swing models. All three of the new HX-A series compact excavators will be offered in both canopy or cabin versions along with the choice of standard or four-way dozer blade.

In addition to the diesel-powered excavators on display, Hyundai will exhibit two alternative-powered prototype excavators.

The Hyundai HW155H is a prototype wheeled excavator powered by a hydrogen-fueled engine. The 2-ton prototype Hyundai R19E is an electric-powered compact excavator.

With a standard 9-cubic-yard bucket, Hyundai will introduce its largest capacity wheel loader, the new HL986A.

Other current-model full-sized wheel loaders, excavators and wheeled excavators will also be on display in the company’s exhibit. Hyundai will conduct live demonstrations of the safety, technology and telematics systems. 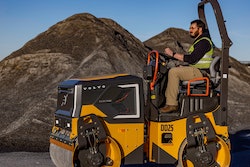 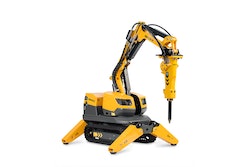 Brokk to Display its Smallest Demolition Robot at ConExpo 2023 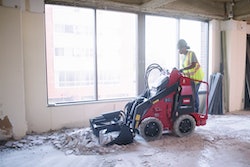