Product details are still sketchy — after all, it's still a test machine — but John Deere used the Utility Expo to strut out its electric backhoe, the 310 X-tier E-Power, now in real-world testing with utility client National Grid.

"The battery electric technology on the 310 X-tier is one way we're going to give leading-edge performance with innovative technology," says Justin Steger, Deere solutions marketing manager. "It is geared toward customers that have stated carbon emissions-reduction goals."

Throughout the spring and summer, National Grid used the machine to perform a variety of jobs, including trenching, loading, digging,  backfilling and using a breaker, says Brian Hennings, Deere product manager, speaking to Equipment World. Up next: cold-weather tests.

The "X-tier" identifies that it has a unique power train, says Hennings. "If we eventually do come out in the marketplace — and things look very positive — the model would be offered as a 310 X."

The placard next to the 310 X-tier at the Utility Expo said the machine represented an "early Phase 1 development in clean-energy solutions," the same language Deere used in its January announcement that it was testing the machine. Deere will head into Phase 2 testing next year, Hennings says, and targeting energy consumption by specific components. "We want to offer at least an 8- to 10-hour composite runtime," he says.

"We're very early in this journey, and it's going to take many iterations to meet customer expectations," Hennings says, noting that even retaining the top 25 mph travel speed can consume a great deal of power. "It's going to be more a matter of years instead of a matter of months."

The 310 X-tier is positioned in direct comparison with the Deere 310L. Deere knows the electric unit will be compared with the runtime of the diesel unit, which has a 34-gallon tank and typically provides more than a day's worth of work. One positive for the electric machine: it has an outside-machine decibel level of 75 while the 310L runs at 89 decibels. "It doesn't sound like a lot on paper, but it's not as loud as my dishwasher,"  Steger says.

Jordanne Waldschmidt, chief editor of Equipment World, caught up with Joe Dietz, the chief technology officer at excavation contractor Bob Dietz & Sons, New Paltz, New York, at the show. Dietz and his two brothers also serve as ambassadors for Deere, sharing their passion for the brand on social media. Here he gives his impressions after operating the 310X-tier for the first time:

Hennings says utility companies, such as National Grid, along with municipalities working under emission mandates, are likely to be first adaptors of the 310 X-tier when it comes to market.

What we know now

As mentioned, Deere compares the 310 X-tier with the diesel-powered 310L.  The placard at the Utility Show posted 310 X-tier specs in line with those of the 310L:

But again, these are just Phase 1 specs. "There will likely be many changes in the specs before it's available for sale," Hennings says.

John Deere announced in January that it had partnered with energy company National Grid — an electric, natural gas and clean energy company serving more than 20 million customers in the Northeast — to pioneer the machine.

At the time, Jason Daly, Deere global director, production systems, technology and marketing, called the project "another stepping stone in our backhoe innovation journey." Adds Hennings: "This is an exciting project for the Deere backhoe design team." 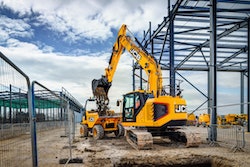 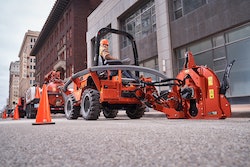