Engcon's quick coupler system EC-Oil will be available on the Deere 75G through 380G excavators and the Hitachi ZX75 through ZX380 models. This feature allows operators to change attachments equipped with hydraulic and electrical connections from the machine cab.

"When we launched our Smart Industrial strategic direction, we committed to investing our resources in solutions that deliver increased value to our customers, such as this agreement with Engcon,” says David Thorne, senior vice president, sales and marketing, John Deere Construction & Forestry.

Tiltrotators in general have seen exponential growth in the U.S. in the past five years. Three major suppliers – Engcon, Steelwrist and Rototilt – have either established a U.S. presence or increased their North American footprint during that time. The product has proven especially popular among smaller owner-operator type construction firms, who find the attachment gives them the ability to do multiple tasks without having to constantly reposition their machines. It also helps eliminate the need for additional personnel on some tasks.

“Through this agreement we’re building on the strengths of Engcon and John Deere to enable contractors to optimize machine efficiency and productivity on jobsites that require versatility and precision,” says Krister Blomgren, Engcon Group president.

Engcon tiltrotators will be available at U.S. and Canadian Deere and Hitachi excavator dealerships in the second half of the year. 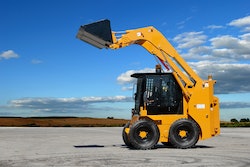