Caterpillar dominated the headlines in 2020 for dozer news.

The company launched six new machines – seven if you count one that simply got a name change. Along with that, it continued its new model naming system with fewer letters, for a more streamlined nomenclature the company hopes will be easier for customers to follow.

Other major manufacturers unveiled new machines with advanced technology, as well as one from Case that transforms the compact track loader into a dozer while maintaining the benefits of a CTL. John Deere and Komatsu also rolled out new offerings.

Here’s a rundown of the dozer stories most viewed by equipmentworld.com readers in 2020:

Caterpillar launched a slew of new dozers, from its smallest lineup to it larger models in 2020 – all receiving roomier, updated cabs.

For the small lineup, the company rolled out the D1, D2 and D3 models with a new look, engine and technology. The redesigned hood slopes lower for greater operator visibility. The new design was made possible by Cat’s smaller C3.6 engine, which is also being used in its other smaller equipment, including backhoes and compact wheel loaders. Tech options include a new 10-inch touchscreen display, Cat Grade Slope Assist, Cat Grade with 3D, and Power Pitch, which allows the operator to control blade pitch from the cab. To learn more about the D1, D2 and D3, click here.

Next in line is the D5. It comes with more weight and horsepower, as well as integrated Cat Grade with 3D, Blade Load Monitor and Traction Control. The touchscreen for the GPS grading system includes smartphone functionality, such as pinching and swiping. The extra weight and power add up to a 4.5 percent increase in drawbar pull and 2.5 percent improvement in productivity, Cat says. To learn more about the D5, click here.

And finally, the D9 was introduced with a focus on reducing owner and operating costs through a new torque converter and maintenance improvements. The torque converter features a stator clutch to increase efficiency and fuel savings. As for maintenance, Cat says it has reduced those costs by 4 percent thanks to a fully integrated Auto Lube system. To learn more about the D9, click here.

John Deere says its new 700L and 750L dozers can run all day while keeping the operator comfortable. They are primarily aimed at site development, roadbuilding and underground construction.

Deere increased cab size 17 percent and increased operator visibility with larger windows. New electro-hydraulic controls have been added. The cabs can be equipped with optional automatic temperature control and a rearview camera. Cab noise has been cut in half, the company says. A heated and ventilated seat is optional.

The D71 will be the largest hydrostatic dozer with factory-integrated machine control on the market, Komatsu says.

The iMC system gives operators more automation features and makes them easier to activate. It consists of four components, including Proactive Dozer Control, which is grade control that can be used 100 percent of the time. It can perform site cleanup, backfilling, auto-stripping, auto-spreading, high production dozing tasks and more. The other components of iMC are Lift Layer Control, Tilt Steering Control and Quik Surface Creation.

The dozer runs on a 237-horsepower Komatsu diesel engine, and at 52,000 pounds, it will be in the same size class as Komatsu’s D65 dozer models.

The dozer sports a cab-forward design and super slant nose for agility, versatility and operating in tight spaces. The slant nose also enables clear visibility to the blade and the operator’s surroundings.

The D71 features Komatsu’s Parallel Link Undercarriage System. Otherwise known as the PLUS undercarriage, it is designed to last up to twice as long as conventional undercarriages while eliminating downtime caused by pin and bushing turns.

Designed as a cross between a compact track loader and a dozer, Case’s unique DL550B compact dozer loader has the features to give it a firm designation as an earthmover.

Heading up its credentials is its undercarriage, with the same grousers, rollers, chains and mounting scheme found on the company’s larger dozers.

Next comes the DL550B’s pin-on C-frame that attaches directly into the chassis and primary coupler to deliver six-way blade performance.

And then there’s the integrated electrohydraulic dozer joysticks that also operate similar to the ISO controls found in skid steers and CTLs. Case says switching between dozer and CTL control is done at the push of a button.

And like its dozer cousins, the DL550B is available with an optional fully integrated ripper.

It will also be available with Case’s universal machine control system, which provides compatible wiring and mounting for Topcon, Trimble and Leica machine control. If you don’t want to deal with masts, lasers or GPS, the DL550B is also compatible with Case’s SiteControl CoPilot. Developed by Leica Geosystems, the system will automatically adjust blade position and hold the machine to that slope or grade.

Above we mentioned Cat’s new dozers, but the company’s new model names for the machines also caught readers’ attention in 2020.

Caterpillar began revamping its nomenclature in 2017, and this year’s dozer introductions are now bearing the results of that.

Here’s a quick rundown of the changes:

In summing up the reason for the name changes, Sam Meeker, product application specialist, said earlier this year, “It follows an automotive strategy. We’ve had a Ford F-150 for decades, but there has never been a Ford F-150 dash-1 or dash-2.”

The new numbers are based on the horsepower class of each dozer model. Caterpillar will rename each size class once that size dozer has undergone a redesign or upgrade.

The simplified numbering system isn’t limited to dozers. Eventually all of Caterpillar’s equipment lineup will undergo a nomenclature simplification. 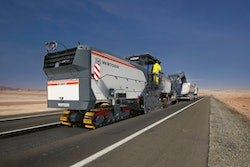 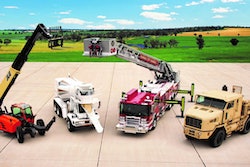 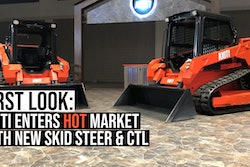