Marcia Doyle
Nov 20, 2020
The JCB Universal Charger allows quick top off of power throughout the work day, and can go from zero to full charge in 2.5 hours.

JCB has enlarged its electric-powered footprint, announcing expansions and upgrades in its telehandler and compact excavator lines.

Powering it all will be an optional fast-charge Universal Charger, which the company says will be compatible with both current and future electric machines.

The 505-20E is a fully electric version of its diesel counterpart, and designed to offer the same performance and productivity, says JCB. It has maximum lift capacity of 5,500 pounds up to a 20-foot height.

But the similarities end when you look under the skin, Brooks says; the diesel and electric machines are very different. A 96-volt lithium-ion battery powers the 505-20E,  driving two motors. One motor operates the driveline and the second drives the machine’s hydraulics.

A 23-horsepower driveline traction motor replaces the hydrostatic drive found in the diesel machine. The motor is connected through a four-wheel-drive drop box to the front and rear axles.

The traction drive motor uses regenerative braking, which helps keep the battery charged. The brake regen function automatically turns off when the battery is fully charged.

The second 30- horsepower hydraulic system motor powers a fixed displacement gear pump, delivering 21 gpm of flow, the same flow and pressure as that on the diesel machine, Brooks says.

Instead of being linked to engine rpm, hydraulic flow is proportional to the joystick position. The telehandler lift end is controlled by an electro-hydraulic valve block. The hydraulic system regenerates flow when the boom is lowered and retracted, which in turn lowers power requirements.

The battery can operate in temperatures from minus-4 up to 140 degrees Fahrenheit. “The robust lithium-ion battery can be charged more than 5,000 times,” Brooks says. “That’s 10 years of use in typical duty-cycles.”

The 240-volt, 16A on-board charger recharges the battery in 8 to 10 hours. Using JCB’s new Universal Charger (see more below), the machine can be topped off in as little as 60 minutes.

In addition to zero emissions, the 505-20E has an in-cab noise level of 66.7 decibels and an external noise level of 92.2 decibels. A white noise reverse alarm is available as an option.

“This is our first electric Loadall, but there will be more to come,” Brooks says.

While the cab’s electric heater provides instant heat to demist windows, “it doesn’t detract from the optimal operation of the machine,” Whyman says. “Even on its maximum setting, the heater only draws on half of the power of one battery, so there’s no impact on digging or tracking when the heater is in use.” The machine has three lithium-ion batteries.

The model will use the same cab as JCB’s diesel-powered 1- to 2-ton models. It features a 70/30 front windshield split with clear joining to increase visibility to the digging area.

JCB says it is now delivering the 19C-1E to more than 23 countries.

JCB’s Universal Charger works with 48-volt to 96-volt-plus machines and is designed to offer all of JCB’s electric machines a way to quickly top off the charge and return to work.

“It’s not only compatible with our current electric products, but also all future electric products as well,” says Bob Womersley, director of product innovation. While all JCB electric machines have a standard built-in charger, they can also be charged with the Universal Charger.

The charger can be used across a fleet of machines. JCB’s 19C-1E compact excavator, for example, can go from zero to full charge in 2.5 hours using the charger.

JCB will also offer electric power packs, designed to offer electrical backup on remote jobsites. “They’re ideal for rental companies,” Womersley says. “Not only will they charge JCB machines but they can also be used to provide backup power on site for such things as lighting.”

JCB says these announcements are an indication of things to come. “There’s a lot more to come from JCB on electrification, particularly on the small end of our product range,” says Brooks. 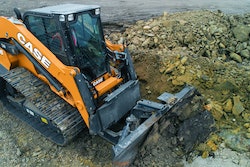 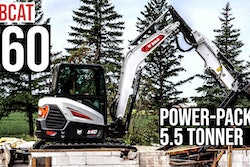