At ConExpo 2020, Mecalac introduced its new MWR Series wheeled excavators to the U.S. market, touting the new machines as having “the stability of a crawler excavator and the mobility of a backhoe loader.”

To increase stability over conventional wheeled excavators, the company lowered the turret’s center of gravity as much as possible while leaving enough ground clearance to protect the undercarriage, says Patrick Brehmer, Mecalac head of design and product management. That also made the machine easier to access for the operator due to a lower cabin and for maintenance with ground-level service points.

Along with service points, Mecalac even moved the fuel tank to ground level. “We have put the fuel tank below so you don’t have to climb on your machine,” Brehmer said. “You can do everything from the ground. It’s a huge step forward in terms of safety.”

The wheeled excavators also feature Mecalac’s side boom, giving them a smaller footprint. “This side boom allows you to be the most compact possible” with the arm raised or when on the ground, he said.

For further compactness, the wheeled excavators can be equipped with four-wheel steer, allowing a near U-turn on the spot, the company says.

The models in the series include the 7MWR, 9 MWR, 11 MWR and 15 MWR, which is available with a two-piece boom attachment. The excavators range in size from 7 to 15 metric tons, with the model number representing the operating weight. 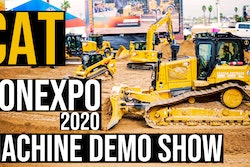 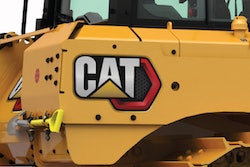 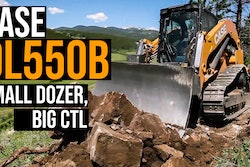 Case Unveils DL550B: Unique 2-in-1 machine is both small dozer and large CTL