LBX goes outside, inside with displays at ConExpo 2020’s Festival Grounds and North Hall 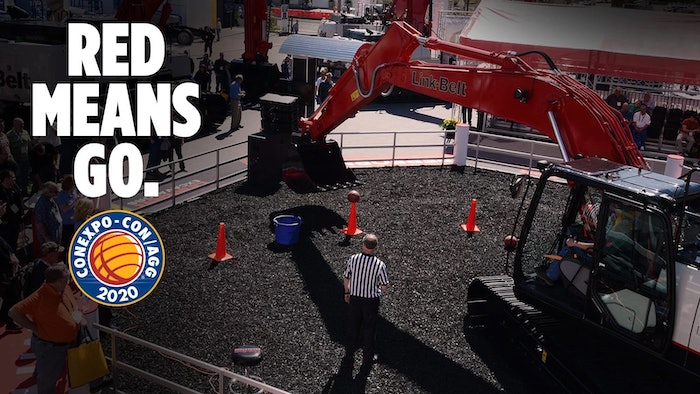 LBX will display its latest Link-Belt excavators at two booths at ConExpo, using both a 24,000-square-foot booth located at F5342 at the Festival Grounds and a 4,900-square-foot display in the North Hall at N12865.

(You can see more of what OEMs have in store for ConExpo 2020 in our show preview page by clicking here.)

Visitors to the company’s North Hall exhibit can create their own Link-Belt 160 X4 excavator design and take away a customized memento. The North Hall location will also display an augmented reality service tool that connects dealer field technicians to remotely based master technicians allowing both to collaborate in real time to diagnose and repair machines. Visitors will also be able to use AR-enabled tablets to experience the 355 MSR prototype machine located at the Festival Grounds.

The next generation of WAVES (Wide-Angle Visual Enhancement System), featuring a human detection function, will be installed on a Link-Belt 210 X4 in the North Hall exhibit.

LBX will also showcase its sixth Rodeo Showdown at the show, located at the Festival Grounds. Operators of a Link-Belt 210 X4 excavator will be challenged to pick up a series of basketballs sitting on cones and scoop them into a plastic bucket without knocking over a cone or dropping a basketball. The reigning Rodeo Showdown world record holder, Shane Rhodehouse, will be competing to defend his record of 00:08.59. The winner will take home an all-expenses paid vacation. The North Hall location will feature a live feed from the Showdown.

The Festival Grounds booth will also feature “Pink-Belt,” a 15.2‐metric ton 145 X4 Link-Belt hydraulic excavator painted pink to show support for breast cancer awareness. This machine will be used for a dice roll appropriate for operators of all ages. The machine will be auctioned off on Thursday, March 12, with all proceeds donated to the Susan G. Komen Foundation and the CHI Saint Joseph Health’s “Yes, Mamm” program.