If you think of Milwaukee as a maker of small tools like drills and the Sawzall, you’d be right, but the company recently took a big leap into much bigger tools and a bigger market with its MX Fuel Equipment System.

The key to the new MX Fuel tools is a big battery system—not quite big enough to power a Prius, but larger than anything else the power tool industry has seen yet. To take advantage of the capacity of the MX Fuel system, Milwaukee created a line of high-output, heavy duty tools for the commercial construction market. Relevant to Equipment World readers are four tools: a 14-inch cut off saw, a core drill, a breaker and a tower light. 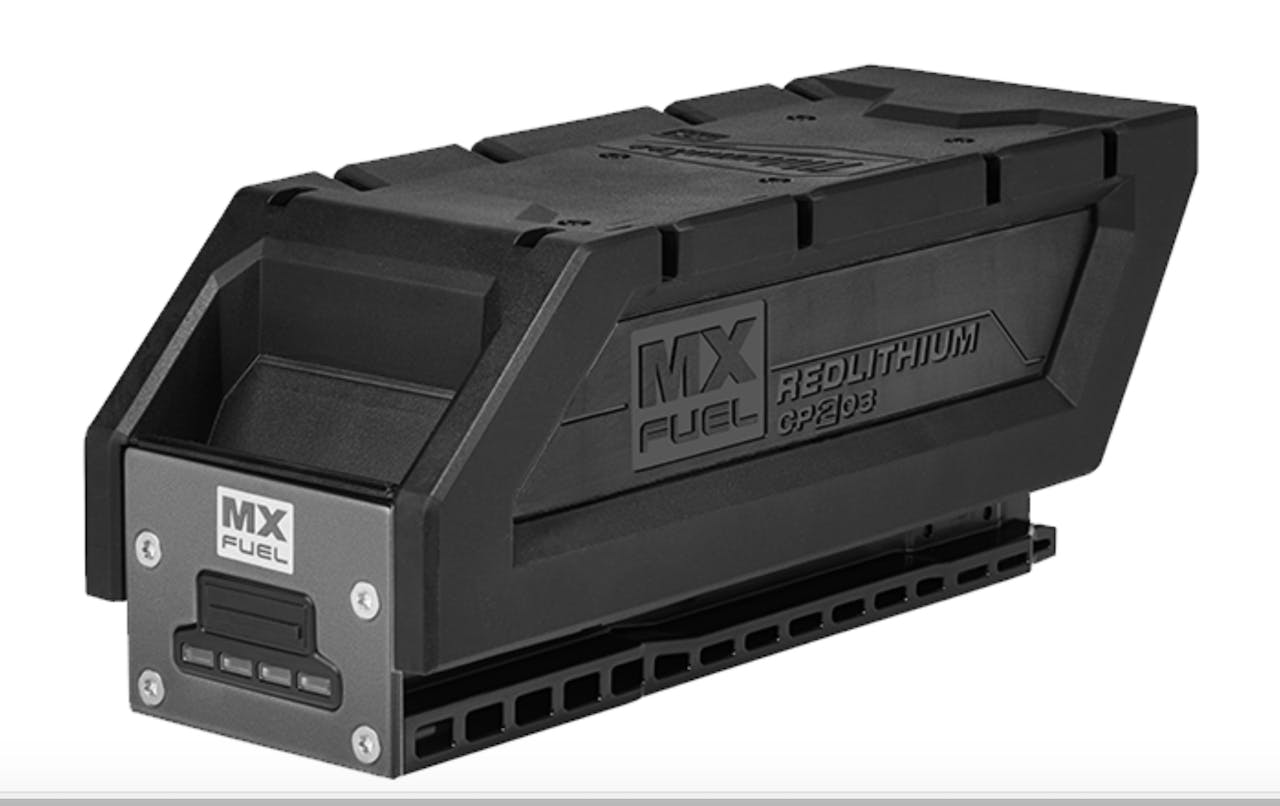 The CP 203 battery recharges in 45 minutes and is used when lightweight is desired.

At 10.6 pounds, the XC 406 battery with give you the most power and runtime. The six-pound CP battery pack gives you ease of use in handheld applications. But the tools will accept either battery.

The XC 406 battery that recharges in 90 minutes but offers the most power and run time.

There are also two charging systems for the new batteries, and either system will charge both the XC 406 and CP 203 batteries. The MX Fuel Handheld Charger is the smaller unit It has an internal fan to keep the charging process cool and a built in handle. Intelligent electronics on a built in circuit board optimize charging efficiency.

The Milwaukee Hand Held charger will recharge one battery.

But you can also charge either battery on the larger MX Fuel Carry-On 3600W/1800W Power Supply. This unit can charge two batteries at once, and if you leave the batteries in the unit it functions as a cordless power supply running off the selfsame batteries. It has two electrical outlets to run your corded tools, or other smaller battery chargers. It’s even got enough power to run a jobsite microwave to heat up your meals. The power is conditioned by a pure sine inverter, creating current clean enough to power a laptop or other sensitive electronics. 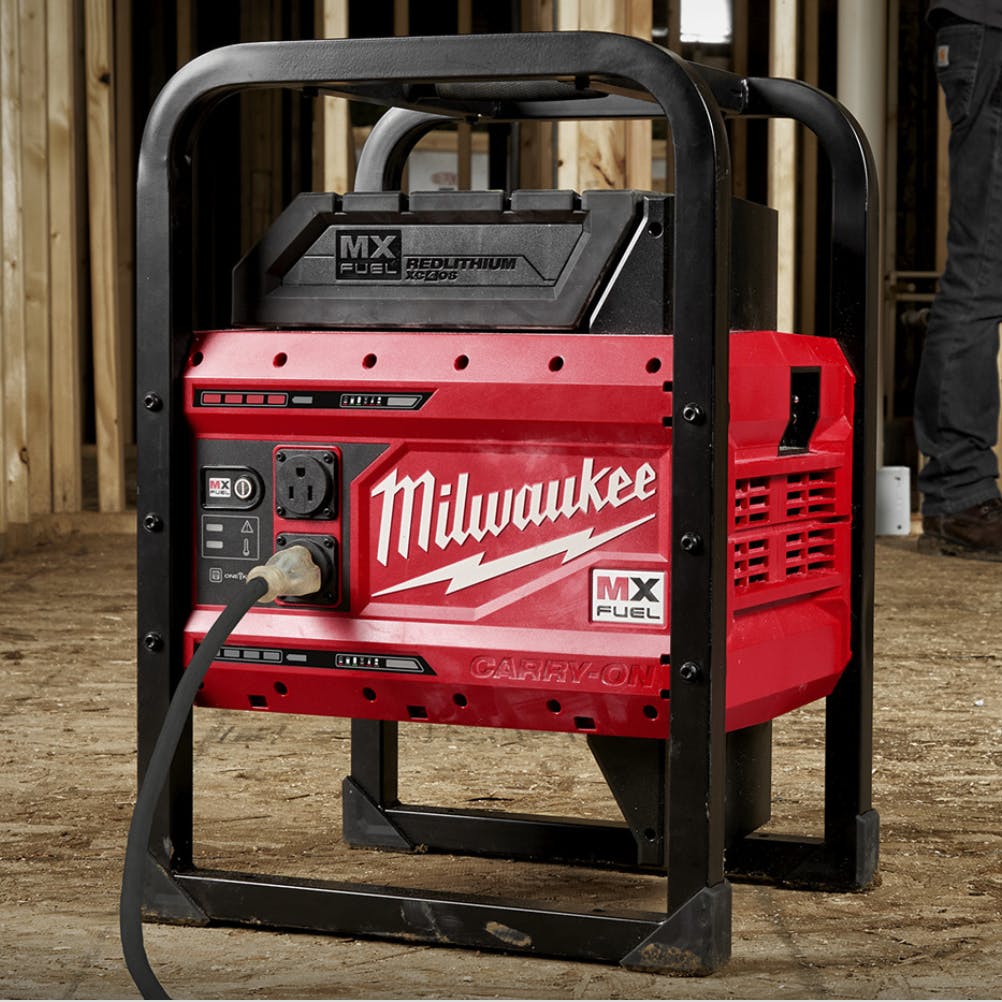 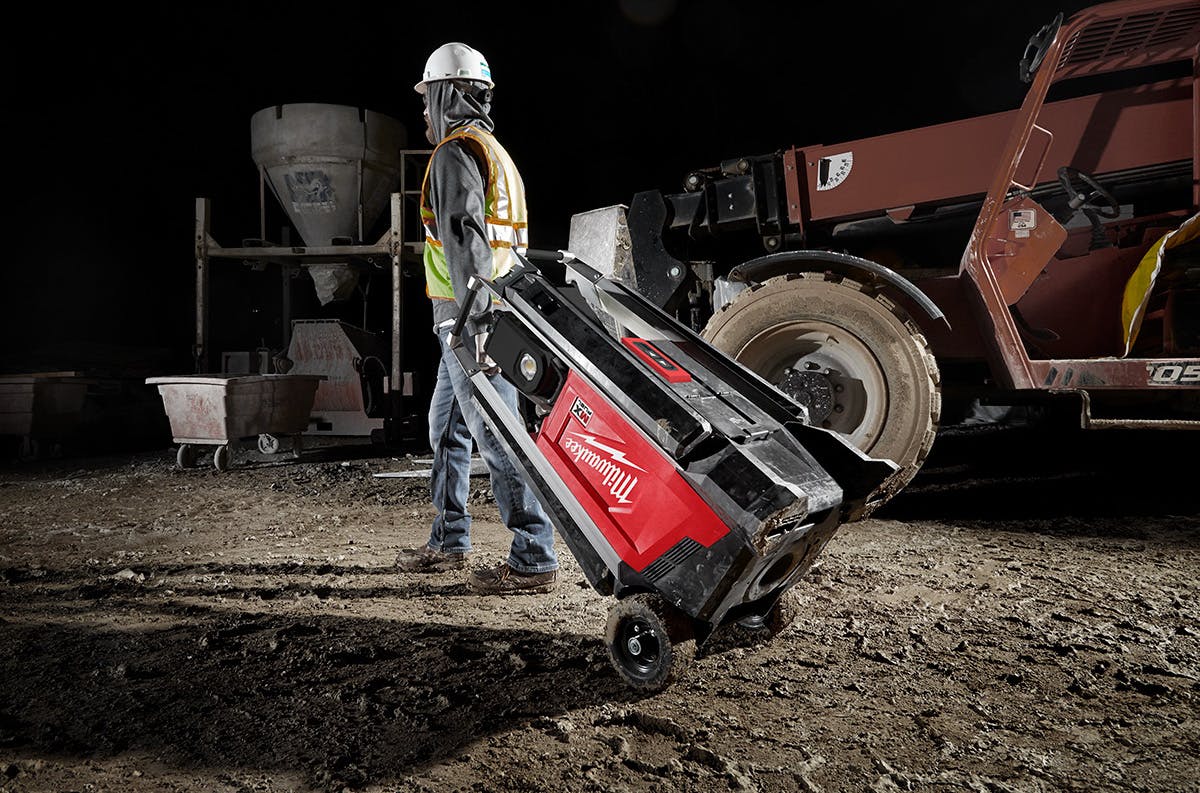 The MX Fuel Rocket Tower Light/Charger is a jobsite light and perhaps the most intriguing of these tools. With a propeller-like LED light head that rises up 10 feet on a motorized mast, it puts out 27,000 lumens, enough to light up substantial portions of an outdoor work zone.

The four light modules can be aimed straight down for overall illumination or angled in any direction for task lighting. It has an integrated charger (meaning you can charge it on an extension cord while using it at the same time) and folds down to just 44 inches tall so one man wheel it around the jobsite. 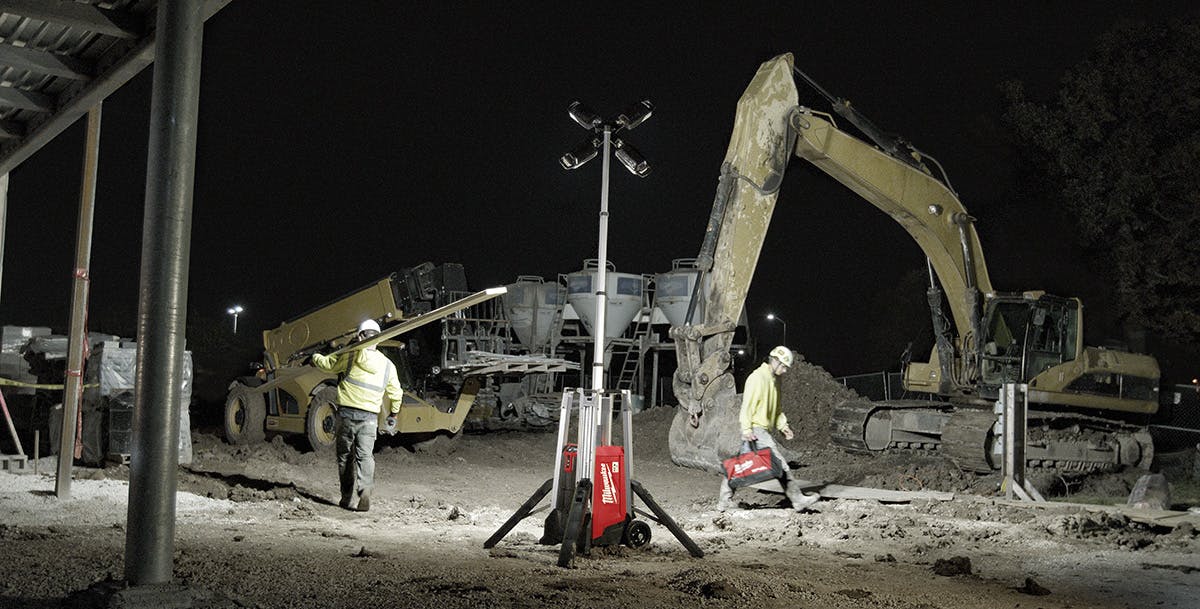 Traditional diesel powered, generator based jobsite lighting systems are noisy, require fuel, maintenance, and a tow vehicle and must be secured against theft. The portable, battery powered Rocket Tower Light/Charger eliminates all of these problems and can easily be stored in the bed of a pickup truck. The unit weighs 108 pounds. 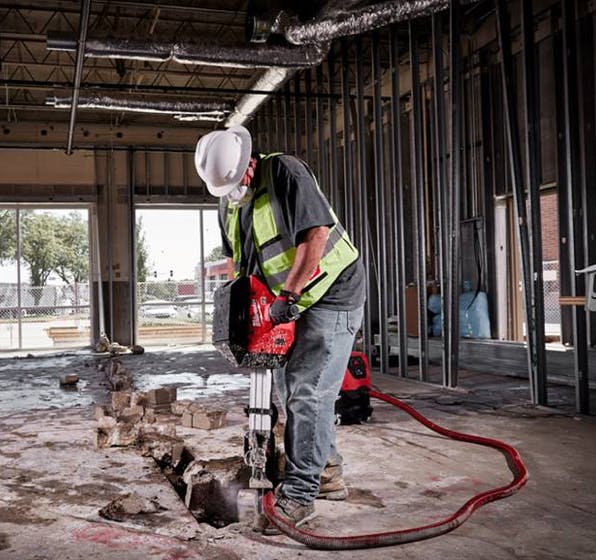 The MX Fuel Breaker with the XC 406 battery has two tons of capacity, enough to break up 40-feet of trench, 12 inches wide and 6 inches deep. The tip of the tool hits with 50 foot pounds of force at 1,300 blows per minute. The chuck is sized to accept 1-1/8-inch tools and the weight is a comfortable 63.9 pounds. It’s low vibration and soft start help make demolition operations more manageable. 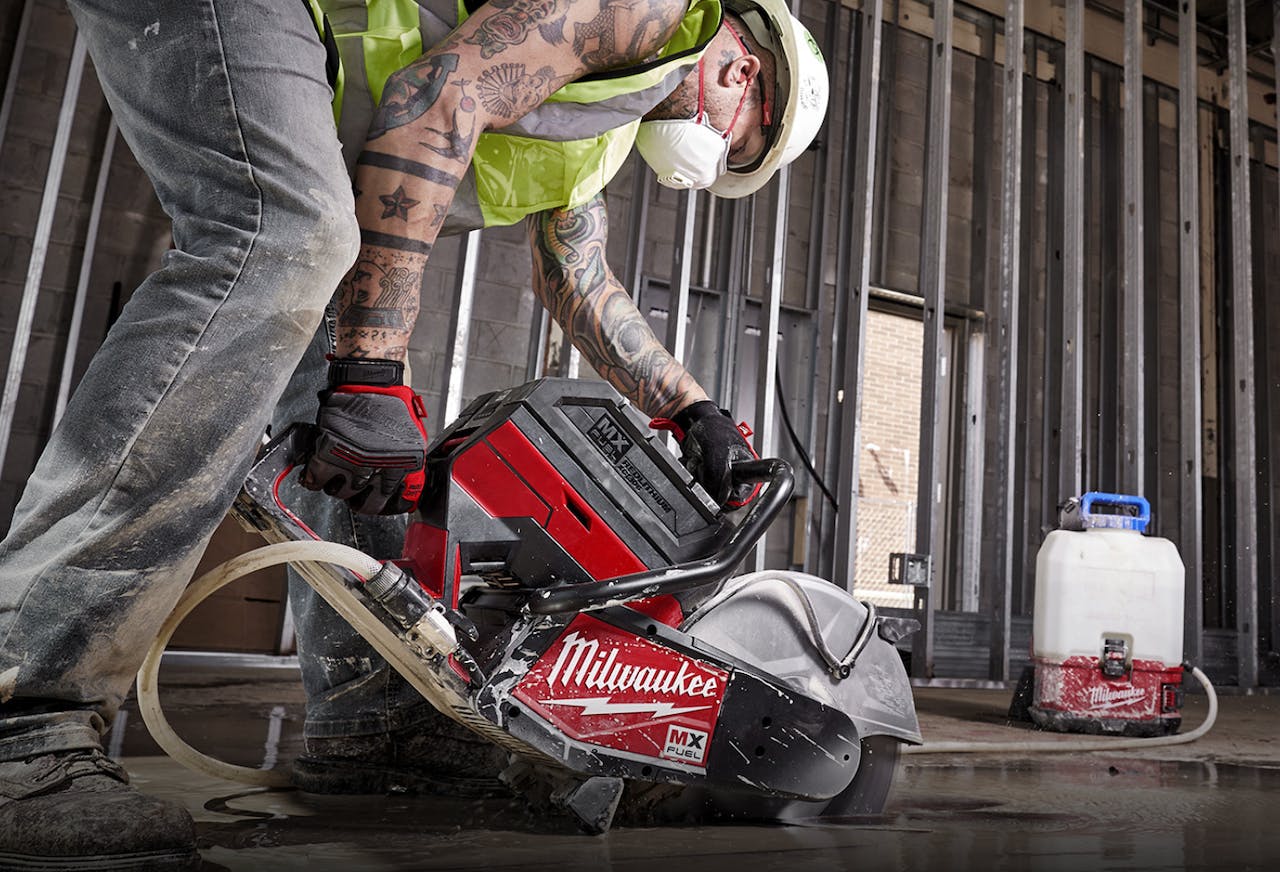 The 14-inch Cut-off Saw can cut wet or dry and comes with an onboard water connection and universal quick-connect hose for wet applications. Cut depth is 5 inches, and it weighs 32 pounds. As far as run times go on a single charge it can cut 14 feet of concrete at full depth, eight cuts in 8 inch ductile iron pipe, 10 cuts in 8-inch cast iron pipe, 22 cuts in concrete block and 106 feet of cuts in corrugated decking using the XC 406 battery.

The Handheld Core Drill with stand can drill holes up to six inches in concrete with rebar. A single charge on the CP 203 battery will get you nine 3-inch holes in block and five 3-inch holes in 6-inch concrete. The XC 406 battery will drill 18 3-inch holes in block. An integrated pressure gauge provides the most efficient drilling pressure and an LED level light helps you keep the drill on track. The unit weighs 21.58 pounds and runs at two speeds: 790 and 1550 rpm. It drills wet or dry. 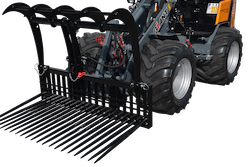 7 attachments to give your compact equipment extra lift 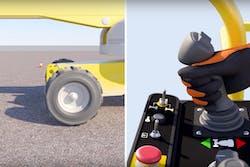 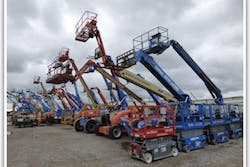