Working under the theme “Building Tomorrow” at Bauma, Volvo Construction Equipment will show off its first hydraulic-electric machines, part of its announced coming switch from diesel to electric in its compact excavators and compact wheel loaders.

Taking center stage will be the L25 electric wheel loader and the ECR25 electric compact excavator. (Further details on both machines after the show.)

During Bauma, held April 8-12 in Munich, Germany, Volvo CE will share space in both inside and outside exhibits with three other Volvo Group companies: Volvo Penta, Volvo Trucks and Volvo Financial Services.

The two exhibit areas will feature 50 machines grouped into sub-themes of  “load,” “dig,” “haul,” “pave,” “innovation,” and “service.” In addition, the inside exhibit will have an Innovation Area, showcasing automation, connectivity and electromobility. The outdoor demonstration area will feature an Operators’ Club competition plus live action displays of the company’s Dig Assist system.

A number of excavators will be displayed, including the debut of the EC750E high-reach demolition excavator and EC300E Hybrid hydraulic-hybrid excavator. Also shown will be the new 20-ton EC200E, which can be factory-fitted with a Steelwrist tiltrotator and controls. Other features on the 154-horsepower model include grouped filters that can be accessed from ground level, foldable guard rails and real-time service alerts.

Also on display will be the company’s updated G-Series articulated haulers, featuring a new cruise control and downhill speed control. Operators can use both features to maintain a constant travel speed and control of the hauler.

In addition, the company will discuss its new telematics Productivity Report, a fleet analysis service that monitors production and helps customers achieve a lower cost per ton. The Productivity Report becomes part of a total reporting package, now called Insight Reports, which can be customized for each operation. It’s now available on Volvo articulated haulers and wheel loaders equipped with On-Board Weighing. 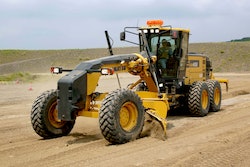 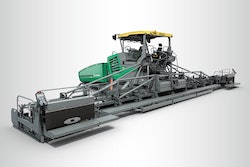 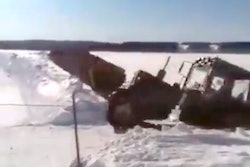 Attempt to rescue stuck tractor only goes half right 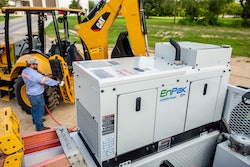 With dedicated engine, Miller EnPak A30GBW delivers power, air, and welding without the need to idle your truck