The HDD fluid cleaning system for 60- to 100-ton drill units can handle 300 gallons per minute, yet it’s trailer size is small enough to meet lower registration and excise tax requirements.

Lee Drugan, marketing manager, was on hand to explain the cleaning system’s operation, showing how the fluid entering the system had 18 to 19 percent sand, but after cleaning, sand was reduced to less than .25 percent.

American Augers designed the M-300D for urban and suburban areas, so it features quiet operation. The company says it is also rugged enough for off-road use when being towed behind heavy equipment.

The system features a tank agitation system that keeps solids suspended in the tank and three pumps for cleaning.

Drugan says the company is offering several options for the new machine, including a two-person or one-person cab, an onboard fluid pump, pipe loader and full-length runway.

The cab can be set off-board to reduce vibration on the operator. The cab also features touchscreen control.

It is powered by a 523-horsepower Mercedes Tier 4 Final engine, which requires no regen cycle. 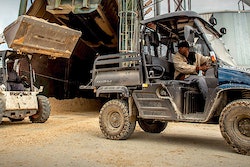 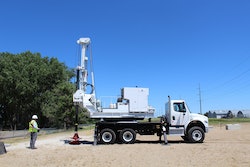 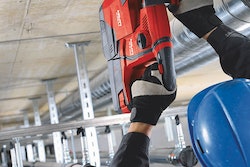