Hyundai Construction Equipment launched two new models to its HX Series of excavators, the HX140L and HX235LCR, at the World of Concrete show in Las Vegas. The company first introduced the HX series last fall.

The HX235LCR is a compact-radius excavator rated at 183 hp and weighing 64,301 pounds. “The counter weight is only going to extend over the track by just a few inches,” says Corey Rogers, Marketing Manager, Hyundai Construction Equipment Americas. “These machines are super popular in the Northeast and in other parts of the country where there is lots of congestion and tight areas such as along road or bridge construction-anywhere contractors are going to need a machine that requires a tighter footprint.”

Maximum digging depth for the HX235LCR is 22 feet, with maximum digging reach topping out at 32 feet, 6 inches. The capacity of the standard bucket, measuring just over 39 inches, is 1.05 cubic yards.

Rogers says the cab of the new machine is slightly different than the rest of HX Series—it’s smaller cab, which  facilitates the machine’s smaller footprint. The HX235LCR does have the new, large monitor featured on the other HX models.

“It’s the same cab as the 9A series, but with a lot of the new enhancements of the HX, so it is slightly different,” he says. “It doesn’t have the haptic control like the HX140L, or any of the other standard excavators would have, it’s just got a standard throttle volume. But it’s got the core benefits of the HX series with a smaller footprint.”

One of the core benefits Rogers mentions includes the standard 8-inch touchscreen cluster-monitor that features the All-Around View Monitoring (AAVM) providing a 360-degree virtual view and the Intelligent Moving Object Detection (IMOD) system. Here’s our hands on with the AAVM system from back in October. Keep in mind that the video does include the haptic controller, which isn’t included on the HX235LCR, but is on the HX140L as well as the other new models.

Both models include the Intelligent Power Control (IPC) system for power optimization based on load demand and the Eco Breaker mode that provides selectable pump flow and better fuel consumption when working with hydraulic breakers. 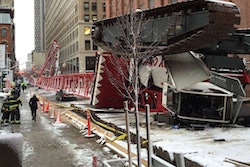 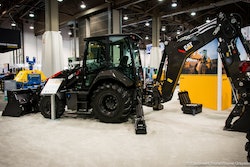 Back in Black: The story behind the Caterpillar 420F2 that you can’t have (PHOTOS) 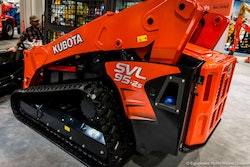 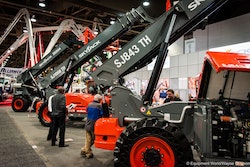