Automated blade control using GNSS signals has been the most revolutionary earthmoving technology of the last decade and now it seems the technology is entering a second phase of refinement and improvement.

Case in point is Topcon’s new 3D-MC Max dozer machine control system, introduced this week at World of Concrete. Rather than use a receiver stuck on a tall mast anchored to the blade, the Topcon system uses two inertial measurement units (IMUs). These IMUs are low-profile boxes about a foot square and two inches thick. One mounts on the backside of the blade, the other on the undercarriage frame. The antennae for the GNSS signal is built into another low-profile box on top of the cab.

Why two IMUs? A traditional GNSS machine control system with just one position sensor on the dozer blade processes location information about 10 times a second. But with Topcon’s dual IMU arrangement the two combined sensors can process information up to 100 times a second, says Murray Lodge, senior vice president and general manager of the Topcon Positioning Group and Construction Business Unit.

That gives the Topcon 3D-MC Max the ability to react to and compensate for small inconsistencies between the blade’s position and the position of the rest of the machine–and do it ten times faster than a standard GNSS system, Lodge says.

In practical terms what that means is that the small errors in blade position that happen when the dozer lurches or the tracks hit low or high spots are corrected almost instantaneously. The end result, says Lodge, that in many cases the dozer can do the fine grading, eliminating the need for a motor grader, and the dozer can maintain higher speeds without needing to slow down to maintain accuracy. Additionally, the dual IMU’s know the blade’s position at all times without cylinder sensors or GNSS Lodge says.

Another more practical benefit is the elimination of the mast and connecting cables on the top of the blade. Since masts are a high-dollar item they represent a theft risk, or operators will have to burn daylight taking them off and reinstalling them every day. This cuts into productivity and can be unsafe when operators are climbing around on the blade to set up the mast.

Topcon also unveiled another new product for dozers, the i-53, an indicate-only GNSS system with a slope sensor. When paired with Topcon’s MC-i4 GNSS receiver and the GX-55 control box the i-53 offers slope and elevation control and shows the operator exactly where he is in the cut on the in-cab monitor. There are also audible alarms and LED lights to let the operator know when he’s on target or getting close. 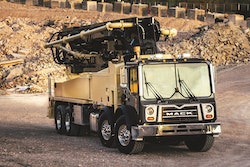 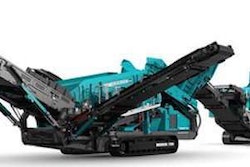 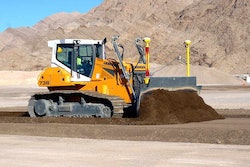