Calling it a “significant milestone,” Liebherr says it will use a power-split transmission as standard throughout its entire new XPower large wheel loader lineup, a decision it says will help give the machines up to a 30 percent fuel efficiency boost compared to conventional drive loaders. The loaders will debut at the bauma trade show in Germany next April, and appear in the United States by mid 2016.

The power-split drivetrain on the L 550 through L 586 models combines a hydrostatic drive and a mechanical drive, and uses a continuously variable transmission gearbox to automatically adjust between the two drives, matching the drive to the job at hand. The hydrostatic transmission, for example, excels at short loading cycles going into a pile, while the mechanical transmission shines in long distances and driving uphill.

“We believe the power-split transmission is the future because it has the advantages of both types,” says Martin Gschwend, sales director, Liebherr-Werk Bischofshofen. Another plus of this transmission: there’s less internal stress, which increases component life.

Leibherr emphasizes the power-split is standard, without additional cost. In fact, Gschwend says the XPower loaders will only have a 1 percent inflation-related price increase when they start production.

In addition, each XPower model will now use the axle previously used in the next-size-up previous machine (for example, the new L 556 XPower will feature the former L 566 axles). “We’re committed to increasing the lifespan of the loaders,” Gschwend says, “and customers expect more service.”

To date, Liebherr says it has put more than 65,000 hours on prototype XPower loaders, testing them at a various customer sites, including quarries, sawmills and recycling companies. “There has not been a single main component failure,” Gschwend says, and the power-split transmission and larger axles “have proved to be particularly durable.”

Liebherr Power Efficiency drive system continues
The company is using its Liebherr Power Efficiency drive system, introduced on its previous loader lineup, to manage the Tier 4 Final Liebherr engine, transmission and hydraulics. The engines, mounted on the back of the loaders and thus eliminating the need for a counterweight, use SCR emissions reduction technology and operate at 1,100 to 1,800 rpms. The L 550 and L 556 use a 4-cylinder and the L 566 to the L586 use a 6-cylinder engine. 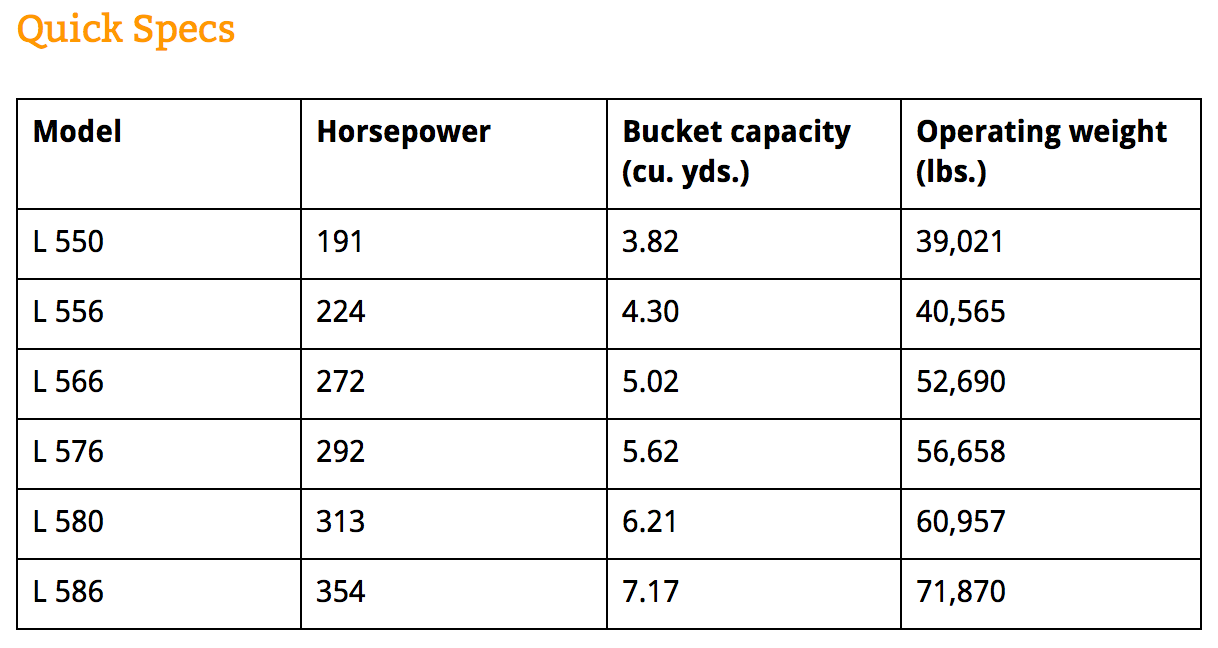 Because the XPower drivetrain independently supports braking, the operating brakes have only a support function, reducing brake wear. Tire wear is reduced by up 25 percent, due to the continuous force control in combination with automatic 45 percent self-locking differentials, providing tractive force whenever needed. “With 100-percent manual locks, most of the time when you need it, it’s usually too late, so we adjust it automatically,” says Mark Walcher, product manager for wheel loaders, Liebherr-Werk Bischofshofen.

Liebherr offers both a Z-bar and an industrial linkage on its L 550, L 556, L 566 and L 580 models (see chart for additional specs). The Z-bar linkage now offers up to 20 percent more breakout force than on previous models. Buckets have been reinforced, with the bucket floor strengthened, and bucket volumes have increased by .26 to .65 cubic yards from previous models, depending on the model. “Either linkage is available at no additional cost so the customer can choose what’s best for his operation,” Walcher says.

The redesigned tapered hood offers increased visibility. “Most operators like to drive through the mirrors and not through the display,” Walcher says, “so we took care with the view to the rear bumper.” Four working lights are now integrated in the rear hood, illuminating the back of the machine. As with most large machines, a rear view camera is standard.

Continuing a feature found in previous machines, the cooling package is located right behind the cab, where air is cleanest. This section of the back end is accessed by a hood that lifts up for air filter cleaning and maintenance. The remaining back hood opens backwards for access to the engine compartment. In the open position, the hood also has a small service platform in front, allowing maintenance personnel to stand comfortably while working within the engine compartment.

“On the way into the cabin, you can check several service points,” Walcher says. Underneath the left-side cabin stairs, there is access to several service points, including the transmission oil glass and greasing system. The cabin door can be locked in the open position, and the door lock also serves as an access step for cleaning the front window on the outside.

XPower cabs became larger, increasing by roughly 4 inches in both width and length, and the air conditioner’s cooling capacity increased by 10 percent. The steering column can be adjusted to three different positions and a hydraulic control lever is integrated into the operator’s seat. Noting that different operators prefer different positions for the in-cab display, Liebherr made the touch-screen display adjustable. Larger window areas extend further than in previous models, improving visibility.

The loaders are equipped with LiDAT, Liebherr’s telematics system. Data from the system can be accessed for one year free of charge.