At ICUEE, Vermeer continued introductions into its S3 Navigator drill portfolio, along with showcasing its InSite productivity tool suite, which it debuted shortly before the show.

The D60x90 S3 directional drill got a 17-horsepower boost to 202 horsepower from the previous machine, changing from a 6.8-liter John Deere engine to a Tier 4 Final 7.1-liter Cat. With 60,000 pounds of thrust/pullback and 9,000 foot-pounds of rotational torque, the D60x90 S3 can install long shots of large fiber bundles; gas distribution lines, smaller diameter pipeline crossings and water lines. The machine will be available starting in December.

“The new tracking circuit on the machine has increased top tracking speed from 2.8 mph to 3.3 mph,” says Tod Michael, Vermeer product manager, underground. A radio remote gives users the ability to position the machine exactly where it’s needed, he adds.

Sound on the machine has been reduced from 119 to 107 decibels guaranteed sound power level, “making the machine significantly quieter,” Michaels says. As throughout the S3 drill lineup, the D60x90 shares common controls so operators can easily transition between different size machines.

Controls include the DigiTrak Aurora full-color touch-screen display, which offers real-time locate information along with on-rig bore planning capabilities that will be part of the InSite suite of fleet management and productivity tools, available in early 2016.

“We launched the previous version of this machine two years ago, and one key selling point has been that it’s self contained, with an on-board pump and rod loader,” says Marvin Klein, global accounts manager, Vermeer. The single row, sliding arm rod loader allows operators to stage five rods at one time, instead of one at a time.

On-demand fans, which run only when needed, have helped reduce the machine’s sound level to 85 decibels at the operator’s ear. Powered by a 415-horsepower Cat C13 Tier 4 Final engine, the D220x300 S3 has a 350-gpm drilling fluid system. Users can use the optional on-board mud pump, a benefit in confined spaces, or choose to remove it and instead run a dedicated mud pump, Klein says. 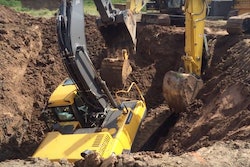 2 excavators, dozer no help at all for excavator stuck in very deep hole 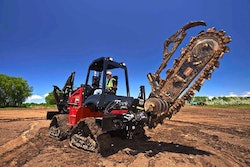 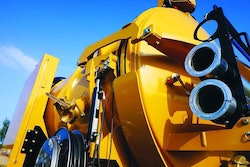