With more drilling power and a new operators station featuring a revamped operating system, all in the same narrow footprint, Toro unveiled the DD4050 at the ICUEE show here in Louisville, Kentucky.

“The number one thing when it comes to drills is how much power and torque you’re able to fit into as small a footprint as possible,” said Toro marketing manager Josh Beddow. And in that department, the new DD4050 does not disappoint.

Beddow said the machine will launch next year.

And while power is any machine’s number one priority, if its interface or control scheme make for too much jumping around, cycle times take a serious hit. Which leads us to the DD4050’s major improvement over the DD4045: the operating system.

Beddow said customers told Toro that the operating system on the operator’s display on the DD4045 was too complicated. Tasks and control changes required too many steps and navigating the OS involved switching back and forth between too many screens.

So, Toro simplified things in a big way with its new drill OS, dubbed TDOS 1.

The DD4050 is the first machine to get the new OS, which anchors navigation of the available controls and options to the bottom of the display through a left-to-right ribbon. Navigating the OS is as simple as pressing left and right buttons to enter screens containing various types of information and controls.

Inside those screens, six buttons, three on each side of the display, allow the operator to enable various controls or select a number of available options.

From that main screen, operators can enable torque and thrust limits to optimize performance on the fly.

Another screen within the OS allows the operator to monitor drill idle time versus engine hours. The OS even translates that comparison into a utility rate percentage so the machine owner can monitor just how efficient the machine’s operation has been for his or her bottom line.

Spokesman Andrew Gillman added that Toro sees TDOS 1 also assisting in preventative maintenance of the drill through service interval alerts once the machine hits one of several hour thresholds. Gillman and Beddow demoed an Auxiliary I/O screen that allows operators to check on various machine diagnostics should the need to troubleshoot a problem while in the field.

Beddow noted that a carryover from the OS on the DD4045 is the ability to choose single- or -dual-joystick operation.

But power and control aren’t the only upgrades the DD4050 boasts over the 4045. The new machine also features a redesigned guarding around the stake-down area. The new guarding gives a better vantage point to the pipe entry area and improves overall visibility from the operator’s station—which has been outfitted with a new seat.

The DD4050 will be available Spring 2016 and a model with an enclosed, climate-controlled cab will be an available option. 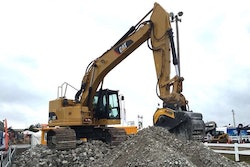 PHOTOS: The heavy equipment and muddy demos of ICUEE 2015 (plus scenes from the show floor) 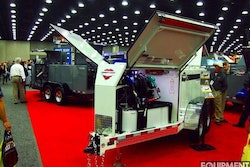 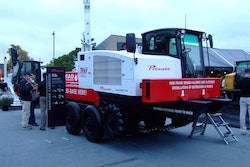