“We’re calling 2015 the year of the launch,” says Alan Loux, vice president of global marketing for JLG Industries. “We’ve got more new and redesigned products coming out than at any time in our history.”

JLG used The Rental Show this week to put some weight behind these words throughout its telehandler and aerial lift lines.

The G15-44A telehandler is now the largest in the JLG line, with 15,000 pounds of capacity and a 31-foot horizontal reach.

Powered by a 130-horsepower Cummins Tier 4 Interim Cummins 4.5-liter engine, the machine has an 18-inch ground clearance, 20-mph maximum travel speed and 61-second boom cycle time. JLG says it has the tightest outside turning radius and lowest gross vehicle weight in its class.

In addition, several other models in the company’s telehandler line have undergone what the company calls a “complete redesign,” with five new models ranging from it 6,000-pound capacity, 42-foot reach Model 642 to its 12,000-pound, 55-foot-reach Model 1255. Inside the cab, a single joystick controller operates boom lift and telescope as well as declutch/transmission neutral and carriage tilt functions.

The use of a single compensation and lift cylinder improves sight lines and reduces the number of parts. The external telescope cylinder is now mounted on the top of the boom, which both helps protect it and makes it easier to service. A rear axle stabilization system automatically switches the machine from a 3-point stance to a 4-point stance.

The company’s SkyTrak models have also gone through major upgrades, including a new color scheme and detail. Powered by Tier 4 Final Cummins QSF 3.8-liter engines, the five-model line up also has a multi-function single joystick in addition to a redesigned dash panel. Models in the line range from the 6,000-pound maximum lift capacity, 36-foot maximum lift height Model 6063, to the 10,000-pound-capacity, 54-foot Model 1054.

JLG says it is also using what it calls a “Dura Tough” polymer for its hoods, which the company says won’t ding like steel and is not as brittle as the common thermoplastic ABS.

The 450AJ articulating boom has 550 pounds of unrestricted platform capacity and a 45-foot platform height with a jib. 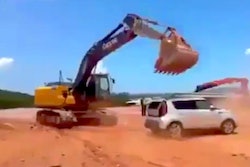 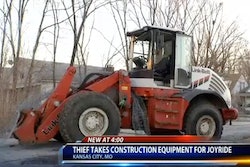 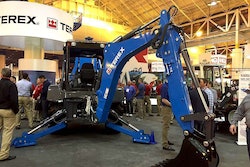